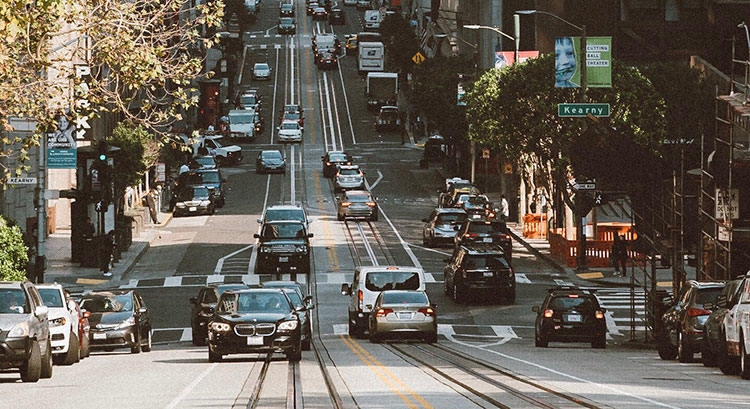 The votes are in, people, and the most startup friendly country in the world is …

You’re sixth — behind fifth-ranked India, fourth-ranked Israel, third-ranked Canada, and second-ranked Britain. That’s according to CEOWORLD magazine’s “most startup friendly countries in the world” rankings, an annual assessment of a country’s competitiveness and capabilities in a “scientific and technical-focused” economy.

The United States secured its top spot for a number of reasons, its research and development (R&D) capacity key among them. America’s strengths include a very high rate of startups, robust angel and venture funding. It’s important to note that  the U.S.  gets high marks for “building its knowledge economy,” home to 119 institutions among the top 500 universities in the world for 2019,  (with) the Massachusetts Institute of Technology, which was the top school in the world.

The United States is home to 119 institutions among the world’s 500 Universities For 2019.

The top five most startup friendly countries in the world remain the same since 2017, but their order has changed. Poland is a newcomer to the top ten, jumping six spots from 2018. Sweden has fallen two places to 9th and Malaysia has slipped one position to 8th.

Most Startup Friendly Countries In The World, 2019: 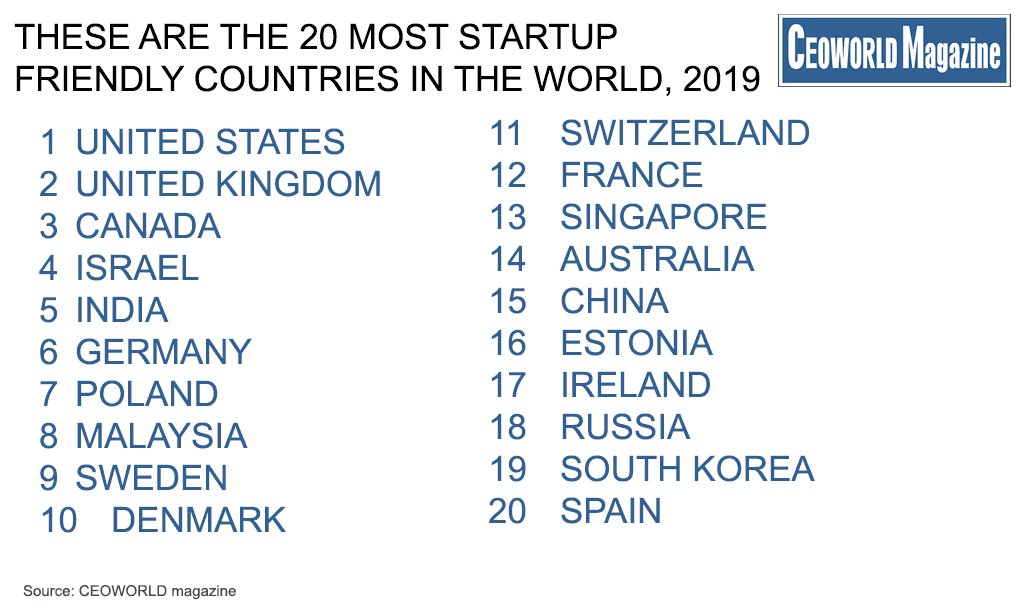 General Methodology on the CEOWORLD magazine’s Most Startup Friendly Countries In The World, 2019 Rankings.

The rankings are based on five major metrics of country’s competitiveness and capabilities. Overall Score (100%) is the sum of:

1) Human Capital Investment: This looks at how much is money (invested) in developing and nurturing tomorrow’s workforce.

2) Research and Development: This examines a country’s research and development (R&D) capacity to see if it has the facilities that attract funding and create innovations that could be commercialized and contribute to economic growth.

3) Entrepreneurial Infrastructure – This determines the success rate of converting research into commercially viable products and services.

5) Policy Dynamics – This evaluates technology outcomes to assess how effective policymakers and other stakeholders have been at parlaying regional assets into regional prosperity.

Survey disclosure: How they made their choices?

Our 194,976 respondents were sent a long list of more than 256 indicators drawn from leagues on every continent and asked one simple question: which countries are the most friendly in the world in 2019?

We asked our respondents to choose 5 countries each, and rank their selection in order from 1-10, No1 being their choice of the best economy in the world for 2019.

The No 1 choice of each respondent was awarded 10pts, No 2 given 9pts, down to 1pt for their No 10 choice. All the votes were added together to give a raw score. An economy needed to receive votes from at least 500 respondents to qualify for the list.

We are very grateful to our respondents for taking part, and none have been paid for participating in this project. To allow our respondents the freedom to express their opinions, individual voting records will be anonymised in the full breakdown of scores.

The ranking relied on surveys from 194,976 people from 95 countries in the Americas, Asia, Europe and Africa.

The survey involved respondents from 95 countries and was conducted between September 12 and December 19, 2018.

The rankings are the result of a rigorous analytical exercise, incorporating multiple data sources.

We analyzed over 130 economies during the data collection process.

The overall score is numerical scores given to the economies based on respondents feedback — measuring a country’s competitiveness and capabilities in a “scientific and technical-focused” economy. Total scores are out of 100.

The margin of sampling error for the full sample of 194,976 respondents is plus or minus 1.3 percentage points.

In addition to sampling error, one should bear in mind that as in all survey research, there are possible sources of error—such as coverage, nonresponse and measurement error——that could affect the results.

This is only one assessment, of course, even if an important one.