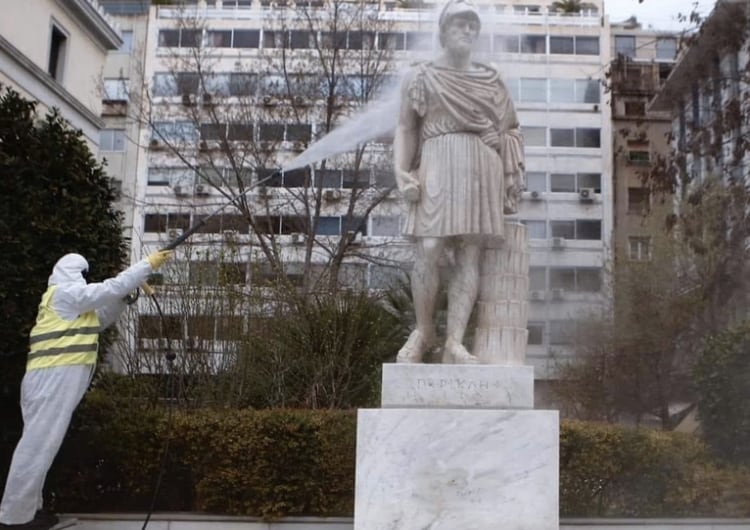 The statue of Pericles gets disinfected in Athens, Greece during the pandemic. The irony is that Pericles, the great statesman, died of the Athenian plague in 429 BC

The current coronavirus pandemic, buzzwords and phrases like flattening the curve and death rates per country’ or per million, debates over the availability of medical devices, the likely impact on the national and global economy dominate the news headlines. We’ve probably seen the word ‘unprecedented’ used more in the past two months than it has in the past decade.

But is this health crisis really unprecedented? And, if history is indeed a playbook for the future, what comes next?

Athens was under siege by the Spartans. Its population had been swollen by farmers and merchants seeking shelter within the city walls. And when plague arrived through the seaport and trade hub of Piraeus, it spread like wildfire, claiming between 75,000 and 100,000 victims.

Second and third waves of the plague came after the initial outbreak, eventually bringing Athenian Democracy to its knees. Beyond the devastating loss of life, the Athenian Plague had wide-ranging social and economic consequences, such as:

The Black Plague, as the bubonic plague that originated in Asia, was dubbed, followed the Silk Road, and entered Europe by its seaports. It spread rapidly, killing 30-60% of the continent’s population. Among the cities to fall was the greatest metropolis of the time, Constantinople, where thousands had their lives ripped away, including the Emperor’s son. In this plague as well, the first outbreak which lasted a year, was succeeded by at least ten more before 1400 AC.

The social, economic, and religious effects were enormous:

Parallels between the Spanish Flu and the coronavirus pandemic are easier to draw due to time proximity. The spread of the 1918 pandemic was facilitated by colonialism and rapidly developing transportation systems, built to serve trading empires that blossomed with the Industrial Revolution. And the close encounters of troops in the trenches of the First World War furthered its spread in Europe which suffered the greatest death toll. Then, like now, some communities responded by imposing quarantines, shutting down public places, and imposing safety measures such as wearing masks and discouraging physical contact.

Looking at the human history of pandemics, some correlations are clear:

Without wishing to raise an alarmist note amid the already dampened pandemic mood and if history indeed repeats itself, the questions in doubt should be:

Will Asian, Muslim, Hispanic and other minorities in Europe and the US be among the long-term victims of the current crisis? Could the Western economies suffer more in the aftermath of the crisis due to the delay of imposing early containment measures giving space to newcomers such as China to prevail? We will be finding out soon enough.

tweet
share on Facebookshare on Twittershare on Pinterestshare on LinkedInshare on Redditshare on VKontakteshare on Email
Thomas KatakisMay 4, 2020