The Volvo Ocean Race provides lessons in leadership, diversity and gaining a competitive edge that smart businesses can learn from – especially now that race CEO Mark Turner has introduced a game-changing rule that will strongly incentivise mixed male and female teams.

How to gain a competitive edge when the playing field is level – when you and your rivals are working with essentially the same resources, in the same markets – will be a familiar problem for anyone doing global business.

It’s a challenge that’s also played out in the sporting world – and in particular in a professional sailing race that provides a perfect metaphor for running a successful business.

The Volvo Ocean Race began life in 1973 as the Whitbread Round the World Race. While its essence as a fully crewed round-the-world sailing race remains unchanged, the early days when amateur adventurers could beg, borrow or rebuild a boat and s­cratch together a team are long gone.

Since Volvo became both owner and title sponsor in 2001 it has developed into a major global sports property. Every three years, the world’s best offshore sailors put together multi-million euro projects, backed by major corporate sponsors, in a race that balances a sporting challenge like no other with a B2B, B2C and B2E platform that global companies like Ericsson, Puma, Telefónica and Dongfeng have used to help successfully transform their businesses. 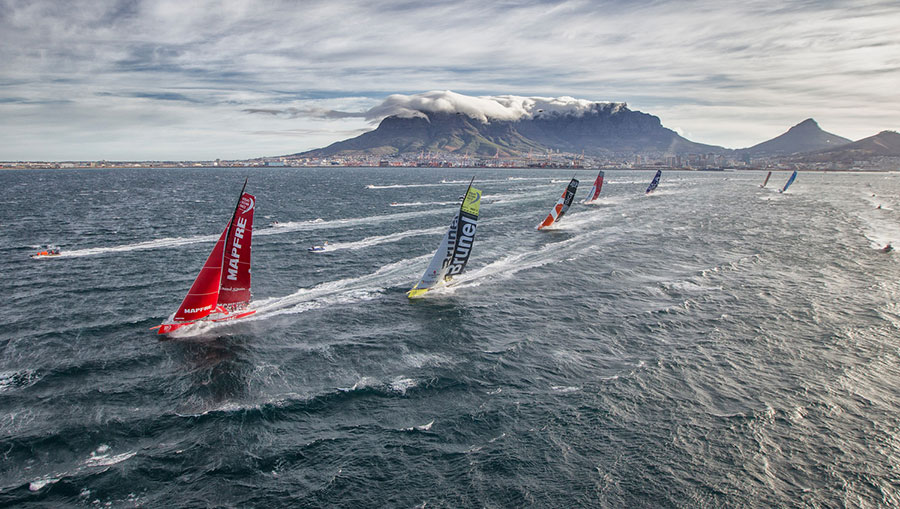 These days the race is run on a strict one-design basis, meaning the teams sail in identical boats, and have access to the same all-important weather data as they plot the fastest route between the dozen Host Cities along the route.

The only way to gain an advantage is to get better performance out of the people taking part – an aspect of the race that fascinates Mark Turner, who was appointed CEO midway through 2016 after turning the company he founded, OC Sport, into a major-player sports marketing business.

“Skippering a team in the Volvo Ocean Race is an incredible challenge from a leadership perspective,” Turner says. “Unless you get things right in terms of teamwork there is no chance you’ll win. In ocean racing, no individual performance can rescue a poor team”.

“The skippers leading the team on the boat not only have their own extremely complicated roles to perform, they also have to get the most out of their crew who will range in age from early twenties to early fifties. With most teams in the 2017-18 race likely to be a male-female mix that’s potentially another challenge to contend with.

“But diversity on board really helps, I think, when you’re at sea together for weeks at a time, racing the boat around the clock at a relentless pace. Having people with a range of experience and diverse characters can help the dynamic especially when the pressure comes on.”

Turner, who took part in the race himself in 1989 while a lieutenant in Britain’s Royal Navy, has divided much of the first six months of his tenure establishing the value proposition for future team sponsors, while working on a new 10-year plan and vision for the race.

And while he points to healthy return on investment in terms of B2B opportunities and brand amplification – the average media return in the last edition was more than five times the investment made – Turner is convinced there is another facet that is uniquely powerful.

“The more we talk to business who have done the race in recent years, and used it successfully, we see that really what we have here is a global business transformation tool.

“It’s an ideal platform for companies to inspire their people, especially after mergers and acquisitions or periods of big internal change. Aligning a multinational workforce around a single global project is a great way to use the race and we’ve seen how it can lead to a surge in pride, and drive worldwide engagement, bringing employees together behind one objective”

“But even more than that, we’re seeing how our sponsors learn from the people who actually sail in it and put those lessons into use.

“Our partners – particularly those who become team title sponsors – get to spend a lot of time with guys who are effectively CEOs at sea.

“The level of access is unlike anything you’d see in other major sports. For a start, sponsors are in on the ground floor in terms of building the project, choosing team members from different nationalities, for example, in order to match key markets.

“They continue to be involved all the way along the line – as much as they want to be, in fact. There are opportunities all the way through to interact with the sailors and skipper, to get to understand the decision making processes they go through, and even to set up specific mentoring and leadership sessions.

“On top of that, it’s a unique platform in terms of B2B opportunities, and we expect 100,000 corporate guests to visit at least one of the stopovers in 2017-18, with more than ever enjoying a money-can’t-buy sailing experience they’ll never forget.  The engagement level is very high – a day at the event very often leads to the invited guest following the race for the next 9 months. It has growing public appeal too. The footfall in the last edition was 2.4 million, with a target nearer 3 million in this next race.

“For sure, we know Premier League football is going to deliver more reach or eyeballs if that is all a company is interested in, but I don’t think there’s any other event in professional sport that can affect the DNA of a company in the same way the Volvo Ocean Race can. Running a team is a metaphor for running a business and we have partners who are constantly learning from the extraordinary people who actually do the racing. It’s fascinating to see it happen.”

Turner’s view is backed up by Anje-Marijcke van Boxtel, who acted as a coach for Team Brunel in the 2014-15 edition, and is Director of Coaching at Schouten Global.

“The Volvo Ocean Race is all about honouring differences in order to produce innovation and creativity,” Boxtel explains. “There is no difference between decisions made at the top level of global business, and those made by a skipper on a Volvo Ocean Race boat.

“In fact, business could learn a lot from the dynamic on board. Research and business psychology suggests that a collective, intrinsically valued ambition allows people to grow and realise their potential. There will be disappointments, and it will get tough. Almost daily in organisations, this happens in some form. It’s at those times that you require your collective identity and shared ambitions.”

Turner is eager to share his own team’s ambitions in the form of a long-term plan for the race.

That will mean building a new class of boat and possibly changing the current three-year cycle – so expect more major announcements from the race well in advance of the start of the next edition in October 2017. Turner, after all, is a man in just as much of a hurry as the sailors who do the race.

Image: Volvo onboard shot
Credit: Amory Ross/Team Alvimedica/Volvo Ocean Race
Info: January 13,2015. Leg 3 onboard Team Alvimedica. Day 10. Around the south of Sri Lanka the fleet enters the Bay of Bengal,still hanging onto the last of the strong winds that are forecasted to soon dissipate. All hands on deck for a sail change as the winds begin to ease