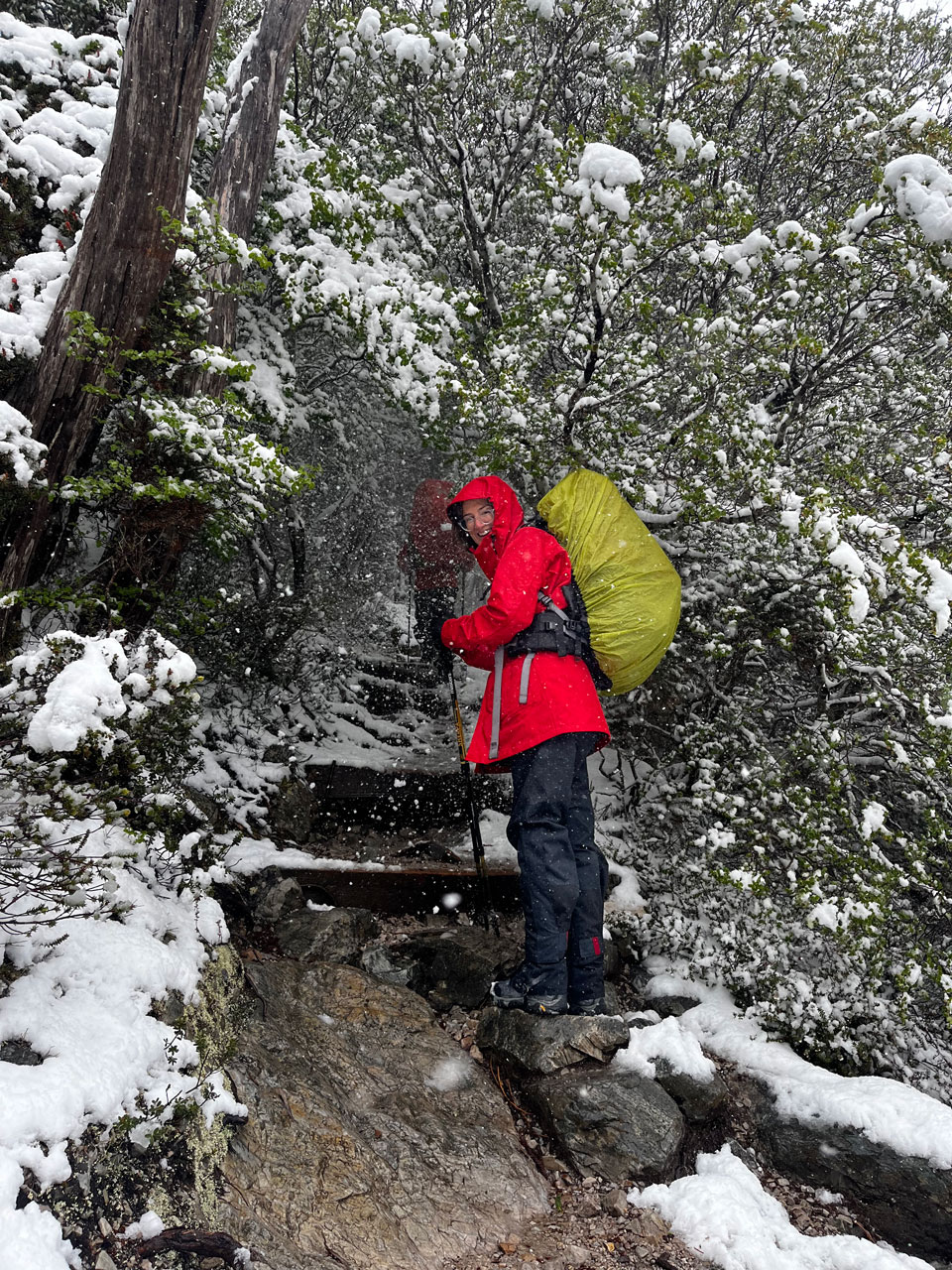 My clairvoyant told me I needed to spend more time amongst trees. You mean – out in nature, I asked. No, she responded quite specifically – you need to find some trees and sit with them and just be.

That’s a hard one for me. From the moment I wake until the moment I fall to sleep my brain goes at a million miles an hour. I am constantly planning, plotting and pontificating between my two ears. And so, I find it very hard to slow down, let alone stop.

And so when a friend asked if I wanted to hike the famous Overland trail in Tasmania from Cradle Mountain to Lake St Claire in November, it seemed like a really good idea. In Australia, November is officially Spring and on the very cusp of Summer. It would be beautiful, the weather would be positively barmy, there would be trees. What could go wrong?

But first, let’s just circle back to the whole clairvoyant thing.

Traditionally, I am very traditional. Although I have always been intoxicatingly attracted to the idea of seeing a clairvoyant, I have been more scared of what they might actually ‘see’. And so I have not indulged. My decision to finally, at 52, throw caution to the wind and do a little crystal ball gazing came about as part of my whole life is too short and it’s time to start living today – philosophy that I embraced after my former life partner passed away at only 54. Life is too short. We need to design and live it audaciously – today – because later may be too late.

So, off to the clairvoyant I went. Find some trees. Etc.

It seriously hit the whole ‘find some trees and just be’ direction I had been given.

We were to carry 15-18 kilograms on our backs, walk up to 8 hours a day for 6 days, ascend heights – including the famous Cradle Mountain on day 1, traverse streams, camp in tiny tents on wooden platforms, poop in drop toilets, arise at dawn and generally be at one with nature. And with only 30 or so walkers allowed to depart on the trail each day, our group of 10 was guaranteed no crowds to cramp our style. Perfect. 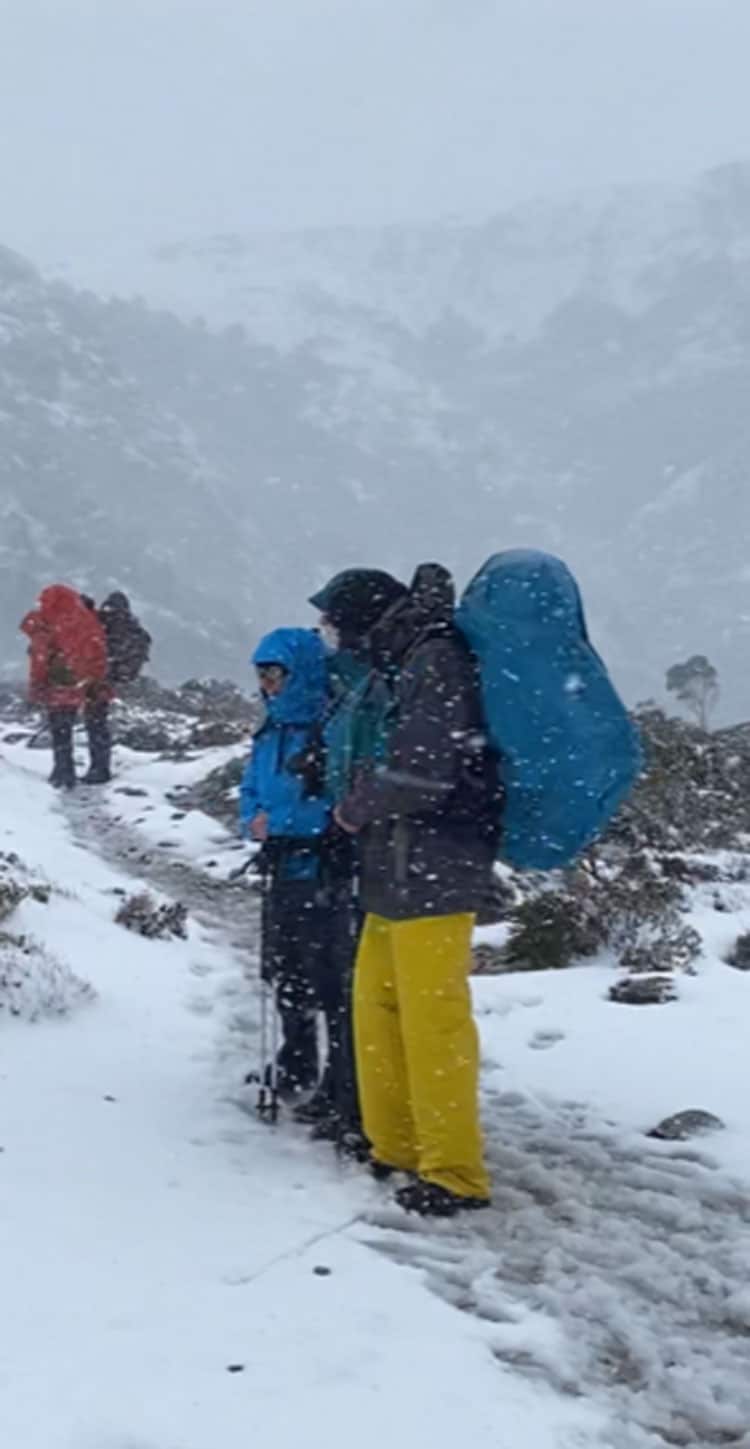 To this point in my life I had never even heard of Thundersnow. I actually thought it was a typo. But no. Thundersnow is an actual thing – described as a dramatic and extremely rare weather phenomenon true to its name – snow accompanied by thunder and lightning – a thundersnow forecast is pretty much a guarantee of a bloody intense snow storm.

And so I googled some more and found a rather alarming video produced by Tasmanian Parks and Wildlife where a lovely gent from Ambulance Tasmania – Paul – declares he is the guy who gets to make the decision as to whether the police and rescue team will keep searching for me if I get lost. Please Paul, I whisper, don’t give up on me. He shares a lot of alarming information about hypothermia, which he insists on pronouncing as two distinct words: ‘hypo thermia’ (which seriously makes it sound even more scary) and there feels like a very strong chance that I am going to die out there.

Paul encourages me to be on high alert for the ‘umbles’ – sharing that ‘stumbles, mumbles and grumbles’ are all early warning signs that I might indeed have hypothermia. As the ‘umbles’ pretty much describe my walking style on a good day I am not sure how helpful this advice is.

Sure, living in Australia and being 2 weeks from the start of summer, I was kind of excited at the prospect of seeing snow, but I’m not going to lie – the life threatening blizzard, hypothermia, umbles thing had me wondering whether the clairvoyant had missed the whole weather channel part of the reading.

So off we set. And. It. Was. Unbelievable.

I have never, and am unlikely to ever again, experience anything like that first day. We hiked for 5 hours and it was extreme. The snow, which started off as lovely little floating confetti giving glancing butterfly kisses, quickly turned into full blown pelting ice straight in the face and it was like being stung by a swarm of wasps. The higher we climbed, the stronger the winds became. With an 18 kilogram pack on my back, my centre of gravity was off kilter and I started to be buffeted from the path – was this the dreaded ‘umbles’? I had to deliberately plant my feet in feet-thick snow and bend my knees to avoid being blown over. It was thrilling. But thrilling in that nervous, try not to laugh hysterically, kind of way you feel as you slowly approach the top of a roller coaster.

With Paul whispering in my ear that he was the guy who may or may not come looking for me, I was relieved when the Guides made the decision to turn back.

We would not be ascending Cradle Mountain. We had been beaten by the Thundersnow.

Written by Kate Christie.
Have you read?
Which are the healthiest countries in the world for 2023?
Best Business Schools In The World For 2023.
Connecting With People On Linkedin: Understand The Ways Of Doing It.
Streamline Your Operations: The Key Points Of ERP Systems by Vangelis Kotselas.
Transitioning Back to the US: A Guide for Returning Expats by Tonya Towles.
Lessons Learned on a 13-Hour Road Trip by Jason Richmond.