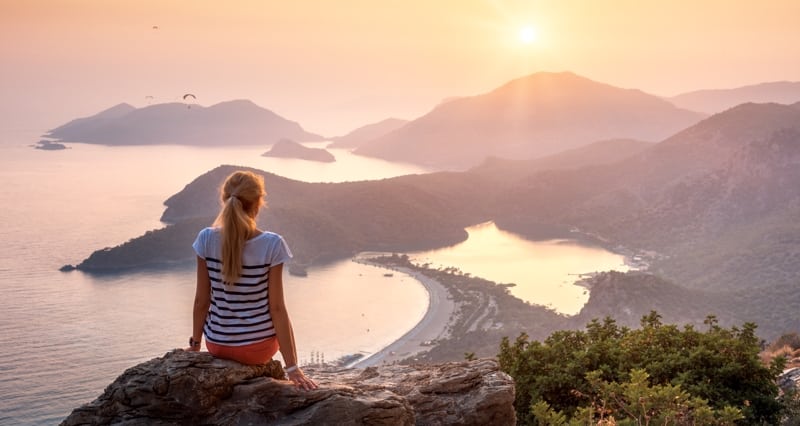 So whenever you decide to pack a bag pack to embark on a journey to travel around the globe, make sure to add the following places to your itinerary.

1. The Great Barrier Reef, Australia
Known as the largest of coral reefs in the world, the Great Barrier Reef spans over a massive 1400 miles. To give an idea of how large that is, the Great Barrier Reef can even be seen from space! With about 400 species of coral, 1500 types of fish and 4000 kinds of , the bio-diversity at this place is astounding. It is one of the Seven Wonders of the Natural World, and hence it is the place to go to if you want a one-of-a-kind diving experience, and a breath-taking display of underwater life.

The only one of the Seven Ancient Wonders of the World still (almost) intact, the Pyramids of Giza are unquestionably worth a visit. Going back to around 2,560 BC, the Great Pyramids of Giza remained as the tallest man-made structure for more than 3,800 years.

3. Antelope Canyon, Arizona, USA
The Antelope Canyon in Arizona is a picture perfect arrangement of crevices you wouldn’t accept wasn’t a photography gimmick until you looked at it for yourself. The manner in which water cut out the crevices several million years ago– combined with the way in which the light hits each wall– influences the stones to seem of diverse , making a stunning display.

4. Ladakh, India
Ladakh, the barren paradise, is a standout amongst the most sought out places to visit in the world. The charm of Ladakh lies in its high mountain passes, emerald lakes, transcending mountain pinnacles, Buddhism and the sand ridges of Hunder.

5. The Great Wall of China
This huge, man-made wall stretches thousands of miles long. Not solely will the marvellous structure leave several tourists scrambling to pick up their jaws knowing it really has been created by human hands, it’s atop a mountain ridge that delivers awe-inspiring views of the area.

6. Petra, Jordan
A city of rose-shaded stone, cut out of Mount Hor’s shake face by the Nabataeans in the third century BC, there’s no other place that provides an experience like Petra. On the off chance that it’s not on your bucket list as of now, it should be.

7. Aurora Australis, Antarctica
While the North Pole appreciates the Aurora Borealis, the South Pole has the Aurora Australis. The most astounding spot to see the Aurora Australis, or Southern Lights, is the wild and untamed mainland of Antarctica. It is just visible from the southern latitudes and has never been seen over the 30-degree latitude line. This wonder regularly shows up as a sparkling green or red drapery of light in the night sky. In spite of the fact that there is no authoritative aurora cycle, they are related to solar wind movement and most normal at the pinnacle of sunspot cycles.

8. Dolomites, Italy
The Dolomites are mountains in north-eastern Italy, and they’re one of the best climbing goals on the planet. The Dolomites are a piece of the Italian Alps and exceptionally famous among skiers and hikers. Guests will, in general, assemble around Rocca Pietore, close to the Marmolada ice sheet, just as in the valleys of Badia, Gardena, and Fassa.

9. Victoria Falls
Often described as one of the most spell-bounding sights in nature, there is no superlative that can match the wonder you’ll feel while standing in the wake of the Falls. Victoria can be visited from both, Zimbabwe and Zambia and holds the record for the largest sheet of cascading water, 1708 meters wide.

10. Machu Picchu, Peru
A UNESCO World Heritage site, Machu Picchu is located in the Andes Mountains, and is the site of the ancient city of Inca. You might find it a bit crowded during peak season, but as the most stunning collection of ruins on Earth, we can bet that it is worth it. Aside from the spectacular beauty here, this place also has a lot of tour companies offering adventure sports like hiking, biking, rafting, zip lining, and whatnot!

And, well.. you guessed it…

We hope to have fulfilled your inner travel bug’s appetite by putting together 10 places to see in the world before you die! Now it is your turn to set aside some moolah each month to check everything off of this list, one by one!

tweet
share on Facebookshare on Twittershare on Pinterestshare on LinkedInshare on Redditshare on VKontakteshare on Email
Bhavishya PahwaMarch 24, 2019