CEOWORLD magazine - Top Stories - Executive Education - Which Countries Will Have The Most Millionaires By 2023?

The number of millionaires may be the highest in the United States (8.68 million), China (1.88 million), and Japan (1.62 million), but that is not where they are growing the fastest.

According to Global research firm Wealth-X, Nigeria, Egypt, and Bangladesh are set to produce more new millionaires than China and India in the five years.

The report found Nigeria to be the front runner, set to see its high-net-worth (HNW) population balloon by a compound annual rate of 16.3% between now and 2023. Nigeria was followed by Egypt at 12.5% and Bangladesh at 11.4%.

The population of high net worth individuals – defined as those with a net worth of $1 million to $30 million — those worth more than $30 million are classified as ultra-high-net-worth (UHNW) and are not represented in this data set.

Which countries will have the most millionaires by 2023? 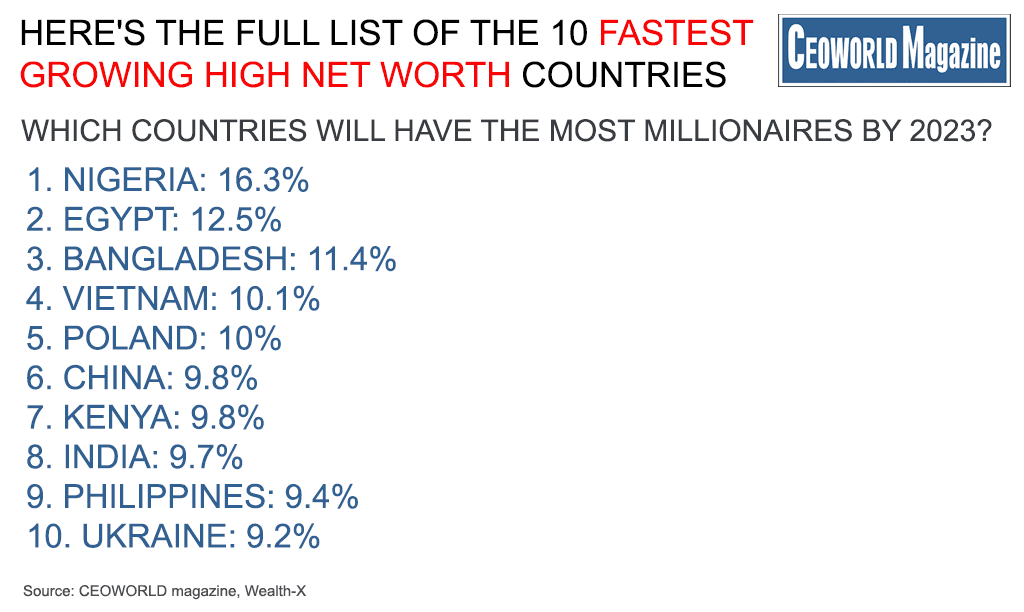 Here’s the full list of the 10 fastest growing high net worth countries:

CEOWORLD magazine - Top Stories - Executive Education - Which Countries Will Have The Most Millionaires By 2023?

tweet
share on Facebookshare on Twittershare on Pinterestshare on LinkedInshare on Redditshare on VKontakteshare on Email
Prof. Dr. Amarendra Bhushan DhirajJanuary 22, 2019