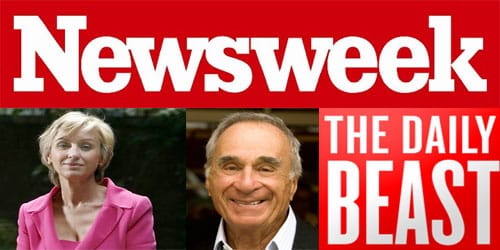 IAC/InterActiveCorp owns the news and commentary site The Daily Beast, agreed this week to enter into a 50-50 venture that would pair it with Newsweek.  Tina Brown will retain her title and also become editor in chief of Newsweek. According to The Wall Street Journal, The Daily Beast Web site is on track to lose $10 million this year. Newsweek — which was bought for $1 by the 92-year-old stereo mogul Sidney Harman in August — is expected to lose $20 million.

The new venture, The Newsweek Daily Beast Company, will be jointly owned by Mr Harman and IAC, which owns websites including Ask.com and Reference.com. Some will still question the financial benefits of the merger?

“The Daily Beast’s animal high spirits will now be teamed with a legendary, weekly print magazine in a joint venture, named The Newsweek Daily Beast Company, owned equally by Barry Diller’s IAC and Sidney Harman, owner (and savior) of Newsweek,” writes Tina Brown, the Beast’s editor in chief.  She is also quoted in the official partnership announcement:

“I see Newsweek and the Beast as a marriage between Newsweek’s journalistic depth and the vibrant versatility The Daily Beast has realized on the Web,” said Ms. Brown. “The metabolism of The Daily Beast will help power the resurgence of Newsweek and Newsweek amplifies the range of talent and audience The Daily Beast can reach. The two entities together offer writers, photographers and marketers a powerful dual platform.”

In her new at role at Newsweek, she likely will renew emphasis on the female reader. Brown has been a force for women through her high-profile positions and in recent efforts. This year, she partnered with Diane Von Furstenberg, Vital Voices and the U.N. Foundation for the first annual Women In The World Summit, a three-day event focused on the challenges faced by women around the world. Big names like Meryl Streep, Hillary Clinton and Queen Rania of Jordan were in attendance.

Tina Brown is regarded as one of the brightest magazine publishing minds around. So the former editor of Vanity Fair and The New Yorker returns to print.

Newsweek’s co-managing editor, Dan Klaidman, said the mere addition of Ms. Brown’s name to the publication’s masthead should help resuscitate the brand. Though he also talked about the potential value of the overall Daily Beast property, the message was clear: In Tina Brown we trust.

“She brings a certain amount of ad pages just walking in the door as editor,” Mr. Klaidman said. “Tina Brown has enormous talent. She can generate excitement.”

“The merger of The Daily Beast and Newsweek audiences creates a powerful global media property for the digital age.”

Why deals like the merger of The Daily Beast, a cutting edge website, with old-school magazine Newsweek, Is future of Print media- old sold or dead?

tweet
share on Facebookshare on Twittershare on Pinterestshare on LinkedInshare on Redditshare on VKontakteshare on Email
Prof. Dr. Amarendra Bhushan DhirajNovember 13, 2010