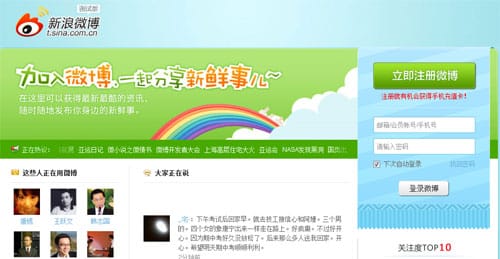 Sina Corp (SINA), a leading Chinese online media services provider, launched $301 million fund for developers to create applications for its highly popular Twitter-like microblog, Weibo (pronounced ‘way-bore’). Sina is one of the few micro-blogging services still around in China after the government banned Twitter and other competitors for refusing to monitor their content.

The developers will use an open platform interface to create applications for the microblog, the firm said in a statement.The fund is also supported by venture capital firms such as Sequoia Capital and IDG Capital and will encourage the development of applications for finance, entertainment and games.

Unlike Twitter, Sina Weibo is in Chinese, giving it a big edge with local users. It also allows users to attach pictures, video and audio to their postings — something you can’t do easily with Twitter. , Weibo was launched about a year ago and has around 50 million users.

Micro-blogging probably has bigger potential in China than anywhere else in the world. Although like Twitter, Sina Weibo imposes a 140-character limit on messages, 140 Chinese characters convey much more information than 140 characters in English or Spanish.

Major difference between Weibo and Twitter,  Unlike Twitter’s ‘replies’, Weibo’s comments do not appear independently in the feed; instead, they are listed under the entry, more like a traditional blog. All discussion around a single Weibo entry, therefore, can be seen easily in one place. Unlike Twitter, users risk having entries deleted by Weibo,  without explanation, if they contain anything deemed politically sensitive.

tweet
share on Facebookshare on Twittershare on Pinterestshare on LinkedInshare on Redditshare on VKontakteshare on Email
Megan BatchelorNovember 16, 2010