At Tencent, all talent and leaders are selected and assessed according to the company’s leadership model, particularly the focus on user experience. In the company’s lexicon, customer-centric means constantly paying attention to the details of products and services from a user or customer perspective. Everyone in the company strives to understand the most critical needs and concerns of the user. They do this through observation, review of user feedbacks, intuition, and systematic data analysis to identify the underlying problems in products that meet their core customers’ everyday needs.

Only by focusing there can Tencent people create exemplary products like WeChat Pay, which, as described earlier, builds on the Chinese custom of exchanging red packets during Chinese New Year; Honor of Kings, an immensely popular interactive mobile game; and WeSing, which offers customers the karaoke experience anytime, anywhere. A person’s user-centric orientation is one of the most important qualities assessed when Tencent is reviewing, training, and promoting talent, and customer focus has become the dominant attitude for all Tencent business teams.

When Amazon hires people, it uses its fourteen leadership principles as a basis for evaluating them. First among these principles is customer obsession. As people cycle through the rigorous loop of three to five interviews at Amazon, half of the interview centers around cultural fit, in particular, customer focus. Amazon bases all its decisions primarily on facts and data from customers. Within Amazon, the saying goes, “If you have data to support your case, you win. Otherwise, Jeff Bezos wins.”1

Alibaba also hires people by looking for evidence of their customer focus. And again, the customer is first among equals in Alibaba’s core six values. Alibaba’s chief strategy officer, Zeng Ming, has focused talent on a customer cocreation process.2 The company follows four steps to create customers. First, it makes sure the right people (who have customer-focused predispositions) are assigned to cocreation projects.

Second, it works with targeted customers to know both what they want and what they need. Third, it builds action plans to deliver customer value. Finally, it continually improves its customer interactions over time. The famous Single’s Day (celebrated on November 11, because of the four ones in the date 11/11) shopping festival is a highly successful output of such processes.

Huawei is unusually intense about training people in customer focus after they are hired. New hires are immersed in a week-long orientation program, with paramilitary exercises in the morning and then deep sessions on company culture in the afternoon.

The newcomers hear story after story, such as the one about the Huawei engineers who rushed to help Japanese telecom clients after the 2011 earthquake and tsunami that caused the nuclear power plant disaster. Stories like these make “putting customers first” come alive.

Facebook’s cultural values emphasize the individual impact of employees, and its efforts to recruit and retain talent encourage this impact. Facebook hires builders and entrepreneurs who can hack prototypes, test them quickly, and build businesses through cross-functional project or flash teams. Newly hired Facebook engineers are not pigeonholed into roles or even departments. They join Facebook, period. From the start, they operate in the larger Facebook playing field: the onboarding process exposes them to Facebook’s overall technical framework, tools, and work patterns. After this initial boot camp, they move into any number of opportunities, depending on their interests and the opportunities then available. Figure 9-1 profiles the work experiences of a typical engineer at Facebook.

This attitude of flexibility is expressed most strongly in the quarterly (or more often) hackathons in which engineers tackle new challenges in highly concentrated forty-eight-hour working sessions, teaming up freely with anyone in Facebook with the specific aim of coming up with breakthrough ideas. An amazing number of winning products—including chat, video, and mobile development architecture; the HipHop compiler; and Timeline—have come out of this process.

CEO Zuckerberg reviews the winning products and ideas personally. A variation on this theme is Facebook’s practice called Hack-a-Month. The practice allows engineers to participate in other teams’ projects for an entire month. At the end of the month, engineers and leaders of both sides can negotiate for changing groups. This model is so fundamental to both the engineer’s growth and the organization’s innovation that every leader helps subordinates find hacking opportunities and supports the move as part of leader’s responsibility.3

Further supporting these efforts is a dedicated internal home page in which everyone in the company can see vacancies and Hack-a-Month opportunities. To be eligible, a person simply needs at least one year of tenure and must be well qualified in his or her current position. Because many employees participate in Hack-a- Month to increase their personal experience (especially teamwork experience related to their own work), they will often return to their original team after their temporary situation. This mechanism encourages employees to participate in the exchange program, but it is not mandatory. Staying in one position for continuous accumulation is also recognized. Supervisors are obliged to support Hack-a-Month opportunities, but no employee is required to participate. Nor are people penalized, overtly or covertly, for not doing so.

Supercell, for its part, expands its personnel cautiously because very few people of great talent are required for outsized business success in the game business. Remarkably, only twenty new staff members were hired in Finland in 2016 (out of about four thousand résumés). The hiring criteria are, obviously, rigorous: new staff have, on average, over ten years of experience in the gaming industry and an outstanding track record. Many staff members can work in multiple modes as artists, planners, programmers, and more. This ability not only makes them flexible, but also gives them multiple perspectives on the games they are creating.

Like the philosophy at Facebook, cultural fit at Supercell is an absolute must on such small and creative teams. Passion for making great games (versus making money), a willingness to accept responsibility, keenness to express opinions and exert influence, and compatibility with team are all key factors.

Once an employee is hired and the work is under way, Supercell allows individuals and even whole teams to join another game-development team if their work seems more promising than the game they are developing. Internal mobility is a hallmark of Supercell. In fact, new projects emerge from the groups themselves as game leads attract internal and external people through their ideas, and staff are free to choose projects according to interest and ability. Nevertheless, even though teams’ establishment and operations are highly autonomous, all decisions are based on the maximization of the company’s interests.4

Companies cannot manage new ideas through the innovation pipeline if teams cannot be formed and dissolved with little friction. There are two reasons for this caveat. First, with rigid teams, the right talent cannot be sourced easily from different units in the organization or ecosystem once the idea proposal is accepted. Second, if the idea proves to be unfeasible, teams that cannot find job opportunities inside the organization. Will have a harder time dissolving themselves and failing forward. Idea pipelines and talent pipelines need to work hand in hand, as witnessed in innovative market-oriented ecosystems like Amazon, Supercell, Facebook, and Google.

Arthur Yeung is a Senior Management Advisor to Tencent Group, where he leads and facilitates organizational innovation and leadership development. Yeung is the founder and president of Y-Triangle Organizational Learning Oasis, a CEO learning consortium that has helped more than two hundred Chinese entrepreneurs and CEOs systematically build organizational capability since 2010. He served previously as Chief Human Resources Officer of Acer Group. He has sat on the board of seven listed companies and has consulted for major corporations in Asia, including Alibaba, JD.com, Mary Kay, Meituan-Dianping, TSMC, Tencent, and VIPKid.

Dave Ulrich is the Rensis Likert Collegiate Professor of Business Administration at the University of Michigan’s Ross School of Business and a partner at The RBL Group, a consulting firm focused on helping organizations and leaders deliver value. 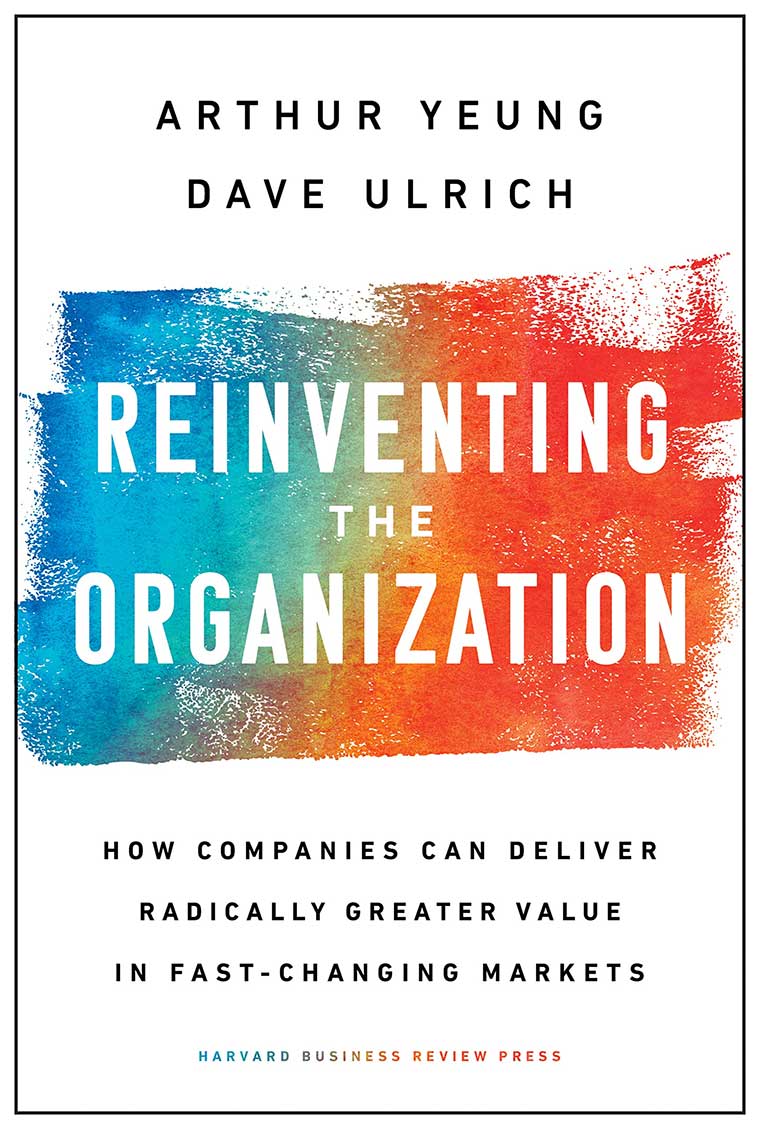 tweet
share on Facebookshare on Twittershare on Pinterestshare on LinkedInshare on Redditshare on VKontakteshare on Email
Featured columnistsOctober 14, 2019