Cockfighting: Solving the Mystery of Unconscious Sabotage at the Top of the Corporate Pyramid

The roles of CEO and chairperson are often filled with strong personalities who are motivated to compete for distinction. When conflict happens at the highest level of leadership in the corporate environment, everyone loses.

Today’s business world moves at breathtaking speed, with ever-increasing demands on leadership. Facing intense pressure not only from outside competition but also from within organizations, senior leaders often feel increasingly overwhelmed, and at the same time unwilling to betray any hint of vulnerability to their co-leaders or colleagues.

This pressure brings to light all sorts of fears and doubts that interfere with engagement and productivity, especially when combined with power games and conflicts among fellow leaders.

When psychological suffering is this intense, it bleeds out of the office into every aspect of an executive leader’s life, causing problems with family, chronic health issues, or a growing sense of despair and isolation. As their constant effort grinds against a mounting sense of hopelessness, far too many leaders never reach out for help, convinced that this level of stress and conflict is normal—an unfortunate but unalterable aspect of working within the upper echelon of business management.

However, they could not be more mistaken. Business does not have to be this way.

By increasing the level of awareness, leaders can use psychological insights to tap into their potential. It is possible to overcome the pressures of today’s business climate in order to thrive professionally and personally.

Most people have a basic awareness of their behavioral patterns, but little understanding of where these patterns come from and, even more importantly, how to overcome them.

The first step is understanding that conscious and unconscious drivers create layers of conflict. These drivers, and how they combine, make the high-stakes CEO/chairperson relationship challenging to navigate.

Drivers of conflict include:

A second layer of complexity overlays these drivers in the form of “intensifiers.” The intensifiers are the participants’ birth order and their levels of self-awareness.

Most business leaders are either the biological first-born child, or a functional first-born (FFB). Functional firstborns are either biological firstborns or people with an age gap of five or more years to the next older sibling (middle or youngest child)). Also included in this category are only children and children that stepped into the role of a firstborn (or had to) due to unusual conditions, such as a loss of a parent.

Knowing that functional firstborns, in general, are more likely to run into power and dominance struggles with other functional firstborns—that their issues with authority may stem from a fear of dethronement or a determination to protect someone as if they were a younger sibling—contributes to understanding conflict at its psychological root.

As I interviewed executive leaders for Cockfighting, I learned that many of the behavior patterns in co-leader relationships stem from experiences in childhood.

After the fifth or sixth interview, a new and significant finding emerged related to birth order. I was surprised to discover that 95 percent of my interviewees were “functional firstborns.”

Functional firstborns cannot be recognized simply by knowing about the numerical birth order (first, second, etc.). Instead, one must learn about the psychological birth order, which describes one’s self-perceived position in the family – the situation a child was born into and the way it interpreted it.

Questions about their role in their family led the interviewees to reveal that their upbringing marked them very strongly. Many added that they never reflected on their upbringing or shared it with anyone; however, once they started talking about it, it was hard for them to stop.

The patterns they revealed were anything but random—firstborn children and FFBs shared a set of characteristics that created a clear pathway to their behavior as leaders.

Many studies over the years have revealed that one of the standout characteristics of firstborns and FFBs is their tendency to exhibit higher IQs than later-borns. They generally are consistently more determined, responsible, reliable, and academically successful.

Firstborns and FFBs tend to be natural leaders. They grow up being goal-oriented, organized, and ambitious, as well as critical and overly sensitive about errors. Perfectionism is a common trait, and they are more likely to suffer from burnout or a midlife crisis.

Parents are generally stricter with firstborns than with their later-born children, so they tend to have more pressure on them to follow the rules. As a result, ideas of authority are likely to become quite important to them.

Firstborns also tend to be analytical and skeptical, less trusting, and less prone to respond reciprocally than later-borns. This combination of traits, along with the fear of dethronement occasioned by the arrival of siblings, breeds a tendency toward anxiety along with its physical manifestations, such as migraines, and stomach and back pains.

Their tendency to strive for power later in life is easy to link with an attempt to reclaim power lost in childhood.

In general, firstborns have a clear sense of right and wrong and are quite rigid with its interpretation. Their communication style tends to be more dominant and instructive, rather than collaborative.

Is it any wonder that two firstborns working together often find themselves locked in power struggles, both fighting for dominance and neither willing to compromise?

The important takeaway is that understanding birth order and the ways in which it might factor into your psychological drivers enables you to use your own traits and characteristics to your advantage.

Steve is a great example of a CEO who lacked self-awareness.

Steve’s employees knew him as a sarcastic CEO. His penchant for needling people, making cutting remarks, and sometimes outright attacking others made people afraid of him, preventing anyone from alerting him to the toxic effect of his behavior.

No one dared show weakness in his presence for fear of being ridiculed or attacked, and the productivity of the company suffered.

For his part, Steve had no idea how strong the effect of his sarcasm was. It was a habit he developed from growing up in a big family with a lot of competition among his siblings; harsh communications paired with a thick-skinned insensitivity to others were his methods of defense—his way to survive.

It took a coach for Steve to become aware of his negative behavior patterns and what triggered these responses in him. As long as he didn’t know what was going on, he couldn’t take responsibility for his actions and his behavior.

Steve could only change when he brought these behaviors from the unconscious to the conscious. He then saw how strongly they influenced his worldview and the way he affected others.

People like Steve often have no idea how their own experiences have affected them. They have no way to change their behavior until they develop self-awareness.

Self-awareness means deeply understanding one’s own emotions, strengths, and limitations. It involves recognizing one’s values and motives, and thinking things over rather than acting impulsively based on emotion.

To improve your own self-awareness, start by paying attention to feelings and the way they shape your perceptions, thoughts, and actions. Use self-awareness as a tool to help manage complex situations, both personal and professional.

Once you learn about the drivers of conflict (such as upbringing) as well as how the past shapes you, it becomes easier to look at your co-leader relationship objectively. You can begin to put yourself in the other person’s shoes more often rather than taking a defensive posture. You can take measures to strengthen your sensitivities and overcome reactionary responses.

Developing self-awareness doesn’t happen overnight—it takes time to step back and self-reflect. This is one reason why so few leaders have a high level of self-awareness until an impending crisis pushes them to think deeply about themselves.

Shedding light on your so-called darker sides can be an uncomfortable experience. The deep dive isn’t always comfortable.

However, it’s a crucial component of personal development that guarantees not only an improved work environment, but also enhanced job performance, company productivity, career prosperity, and psychological well-being—and it also benefits personal life.

In short, it’s work worth doing. Moreover, it can even be fun. 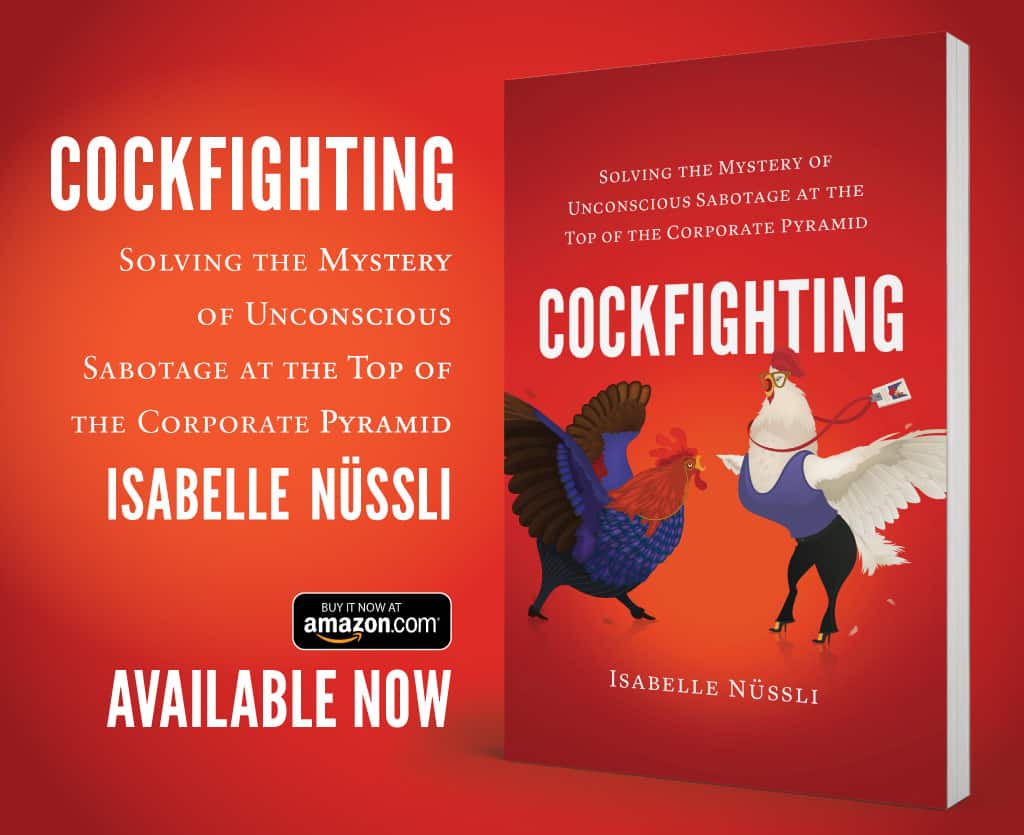 The following is adapted from Cockfighting: Solving the Mystery of Unconscious Sabotage at the Top of the Corporate Pyramid (Leverage YourSelf AG; November 13, 2018) by Isabelle Nüssli.

tweet
share on Facebookshare on Twittershare on Pinterestshare on LinkedInshare on Redditshare on VKontakteshare on Email
Isabelle NussliFebruary 15, 2019

An international senior executive, Isabelle Nüssli brings insider knowledge to her practice as a leadership and personal coach. As Chief Energizing Officer for leverage-your-self.com, Isabelle directs a team of experts in business, behavioral economics, and applied psychology that supports business leaders and startups in navigating changes and capitalizing on their organization’s full potential. Her skills as a relationship builder and team motivator are characterized by inclusivity, inspiring positivity, and a passion for developing strong organizational dynamics at the human level. Isabelle is a regular contributor to the CEOWORLD magazine.
view all posts