Meanwhile, Karolinska Institute ranked No. 14 in the CEOWORLD magazine’s ranking of the world’s top 50 universities for medicine and health science degrees, 2019.

This ranking highlights the best institutions that are leading across medicine, dentistry and other health subjects. Discover where to study with the CEOWORLD magazine university rankings by Subject 2019: Medicine And Health Science.

To create a list, the CEOWORLD magazine reviewed numerous national and international rankings to find the top 50 universities for medicine and health science degrees. Data and information are taken from publicly available information, research papers, academic studies, and the CEOWORLD magazine’s best universities in the world ranking. This list was condensed to what we considered the world’s top 50 best universities for medicine and health science degrees, 2019.

The University of Pennsylvania came in fifteenth place, followed by Duke University (sixteenth), King’s College London (seventeenth), University of Washington (eighteenth), and University of Edinburgh, ranked nineteenth. Out of the world’s Top 50 universities for medicine and health science degrees, 2019, the University of California, San Diego ranked No. 20th.

Here Are The World’s Top 50 Universities For Medicine And Health Science Degrees: 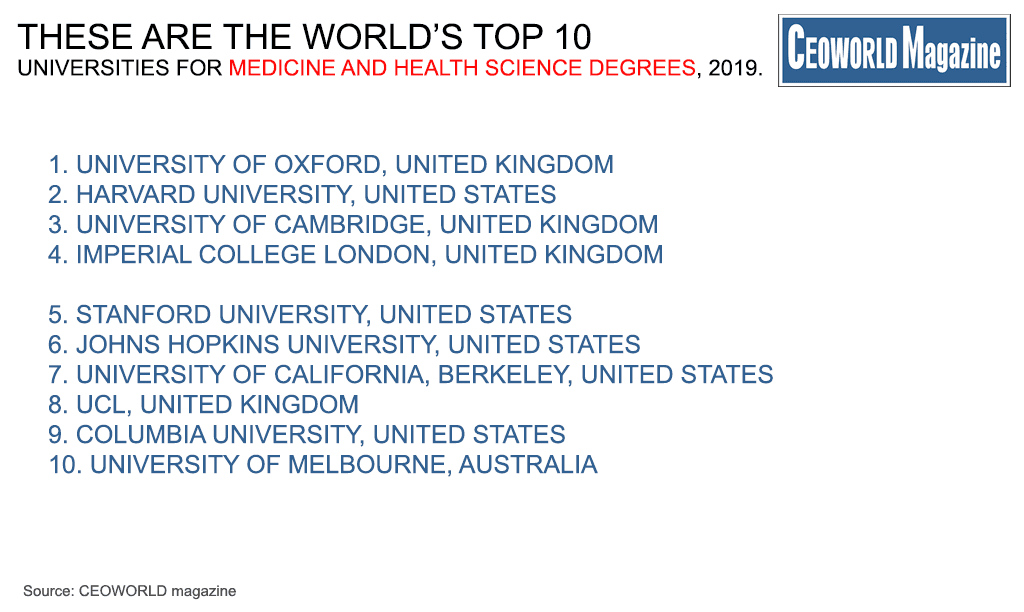 tweet
share on Facebookshare on Twittershare on Pinterestshare on LinkedInshare on Redditshare on VKontakteshare on Email
Sophie IrelandDecember 19, 2018