CEOWORLD magazine > The Latest > C-Suite Advisory > Meet Sushma Sharma Of Konversai, Who Is Creating A One-Stop Shop For All Human Knowledge [Profile] 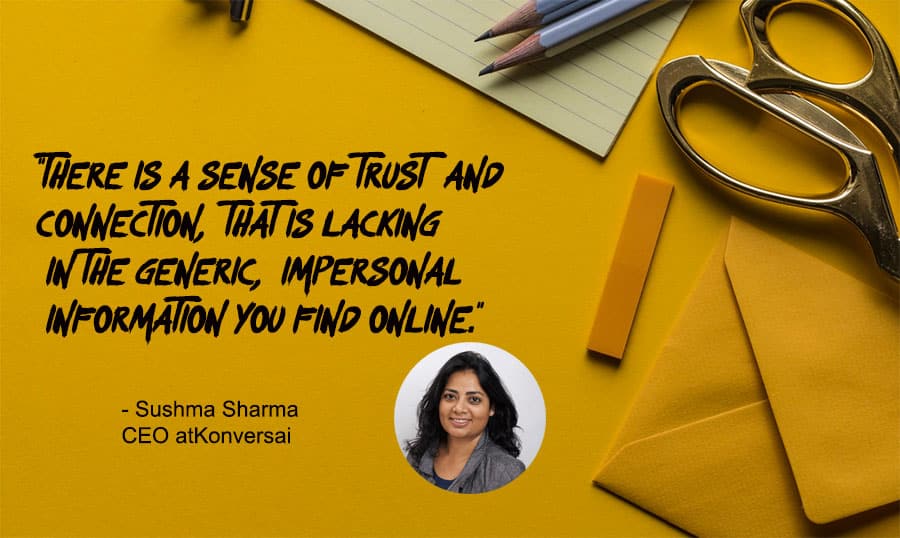 Sushma Sharma, the founder and CEO of Konversai, is on a mission to “democratize knowledge” and make the world a better place by facilitating meaningful connections and conversations. Her company, a live video-based knowledge-sharing platform that connects seekers and providers of knowledge or specialized information, enables one-on-one interactions with higher levels of personalization than those made possible by the competing firms in the burgeoning industry.

Ms. Sharma is both a lawyer and an entrepreneur. She also is somewhat of an outlier, being both a minority and a woman, as the leader of a technology startup. However, Ms. Sharma’s trail of accomplishments is meritoriously unchallengeable. She possesses the pedigree of a thoroughly credentialed leader striving upwards with passion and conviction.

Sushma has earned law degrees from three of the highest-rated schools worldwide. She holds two master’s degrees in law from Columbia Law School and the University of Oxford and a bachelor’s degree in law from Delhi University.

Preceding the founding of Konversai in 2015, Sharma was an associate at two major law firms in New York City. She worked at Kirkland & Ellis for one year and Shearman & Sterling for five years. She also spent six years leading a highly coveted post-graduate law program at City University of Hong Kong, during which time she had the opportunity to interact with, mentor, and learn from thousands of students.

Bringing Konversai into the Conversation

Ms. Sharma’s company is changing how the world shares knowledge. The innovative platform encourages all users to be both providers and seekers of knowledge on any and as many topics as they wish, no matter how seemingly commonplace or obscure. Any and all knowledge, skills, and experiences have a place on Konversai, and each and every user has something valuable to offer. You don’t have to be an expert, and you don’t have to have all the answers. According to Ms. Sharma, what you already possess is enough. Konversai allows you to come as you are, making authenticity a key ingredient to all interactions on the platform.

It is Konversai’s personal connection that distinguishes it from the competition, such as Khan Academy, Udemy, and Coursera, all of which only offer video-taped academic lectures that lack a live, one-on-one interaction. Konversai’s business model shows that there is power in conversations.

“When you speak with someone whom you are seeing, you actually learn from that person and retain what you have learned better than if you had just read a book or watched a lecture; there is a sense of trust and connection that is lacking in the generic, impersonal information you find online.”

What’s more, Konversai’s platform is not limited to academic subjects. Whether you are planning a trip and want to speak to someone who knows the place well, are looking to increase your proficiency in a foreign language by conversing with a native speaker, need some advice on engaging your special-needs child from someone who has walked the same path, or want to improve your public speaking skills in a non-intimidating environment, you can do all of it and more on Konversai.

A New World of Opportunities

Konversai effectively addresses the pain points of people who may not be able to easily capitalize on their skills to support themselves with flexible income-generating opportunities. This is a potential life changer for the disabled and elderly, who are skilled but challenged to earn money in a “conventional” manner. The same type of scenario may exist for people living in remote areas where jobs are not available or difficult to find. The platform also complements today’s rapidly growing gig economy. Anyone from anywhere can now earn a side income from the comforts of their own home. Konversai’s circular, self-sustaining business model allows users to spend money and earn money, thereby empowering themselves and others.

Character at Its Core

The purposefulness of Konversai is deeply rooted in Ms. Sharma’s personal belief that everyone in the world has valuable knowledge, skills, and experiences to share. There should be no barriers to accessing knowledge and information. In the long term, the company has the potential to be a sustainable, virtual, global village where everyone is equal and welcomed. It is not Utopia; it is Konversai.