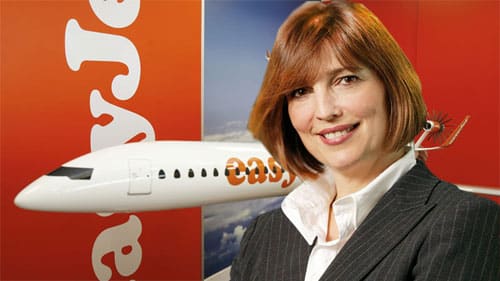 Guardian Media Group (publisher of The Guardian and The Observer newspapers) chief executive Carolyn McCall is to become the new boss at budget airline EasyJet. Carolyn McCall will replace the Andy Harrison, who is set to join hotel and restaurant group Whitbread PLC later this year.

McCall, 48, has headed the Guardian Media Group since 2006. The Observer had a £57million pre-tax loss last year after paying £11million in staff payoffs. GMG is seeking a further 100 voluntary redundancies.

Ms McCall said: “The Guardian has been my second family for a quarter of a century and I feel incredibly privileged to be part of such a wonderful and unique organisation.”

But she added the chance to take the controls at easyJet is “a once-in-a-lifetime opportunity”.

“I will leave GMG knowing that our journalism has never been more influential or widely read and with complete confidence that its financial position is secure,” she said.

In January, the company announced that EMI executive Chris Kennedy would become chief financial officer. He will replace interim CFO Mark Adams, who filled the post after Jeff Carr resigned in May.

The appointment completes a round of changes in the airline’s top management. Sir Michael Rake, chairman of BT Group PLC, took over as chairman on Jan. 1, following the departure of Sir Colin Chandler.

tweet
share on Facebookshare on Twittershare on Pinterestshare on LinkedInshare on Redditshare on VKontakteshare on Email
Prof. Dr. Amarendra Bhushan DhirajMarch 24, 2010