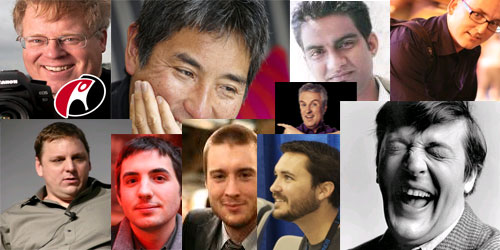 Britney Spears- an American singer and entertainer. Britney Spears is one of the most popular female artists on the planet, with worldwide sales topping the 20 million mark. While her biggest hit continues to be her first, “…Baby One More Time,” Britney’s music still invades the airwaves and MTV, and her face is constantly in the tabloids. Despite the personal and highly publicized breakdown she suffered, she’s back on her feet and in the midst of a world tour in support of her album Circus.

Ashton Kutcher- an American actor and former fashion model best known for playing Michael Kelso in the Fox sitcom That ’70s Show. He was the creator, executive producer, and host of the MTV celebrity prank show Punk’d.

Gov. Arnold Schwarzenegger- an Austrian American bodybuilder, actor, businessman, and politician, currently serving as the 38th Governor of the state of California. Schwarzenegger is married to Maria Shriver and has four children.

Demi Moore- an American actress. Moore took her professional name from her first husband, Freddy Moore, and is the mother of three daughters from her marriage to Bruce Willis. She has been married to actor Ashton Kutcher since 2005 and later took his last name in 2009.

Guy Kawasaki- a Silicon Valley venture capitalist. He is currently a Managing Director of Garage Technology Ventures, and has been involved in the rumor reporting site, Truemors, and an RSS aggregator, Alltop. He is also a well-known blogger.

Michael Arrington- an entrepreneur and founder/co-editor of TechCrunch, a blog covering the Silicon Valley technology start-up communities and the wider technology field in USA and elsewhere.

Pete Cashmore- a new media expert, technology consultant, and founder of Mashable, one of the top-twenty blogs in the world according to Technorati.

Amarendra Bhushan- A journalist, blogger and serial entrepreneur known for his work as Founder and CEO of ceoworld.biz and as editor of CEOWORLD Magazine

Darren Rowse- a blogger, speaker, consultant and founder of several blogs and blog networks, including b5media and ProBlogger.com.

tweet
share on Facebookshare on Twittershare on Pinterestshare on LinkedInshare on Redditshare on VKontakteshare on Email
Prof. Dr. Amarendra Bhushan DhirajFebruary 6, 2010