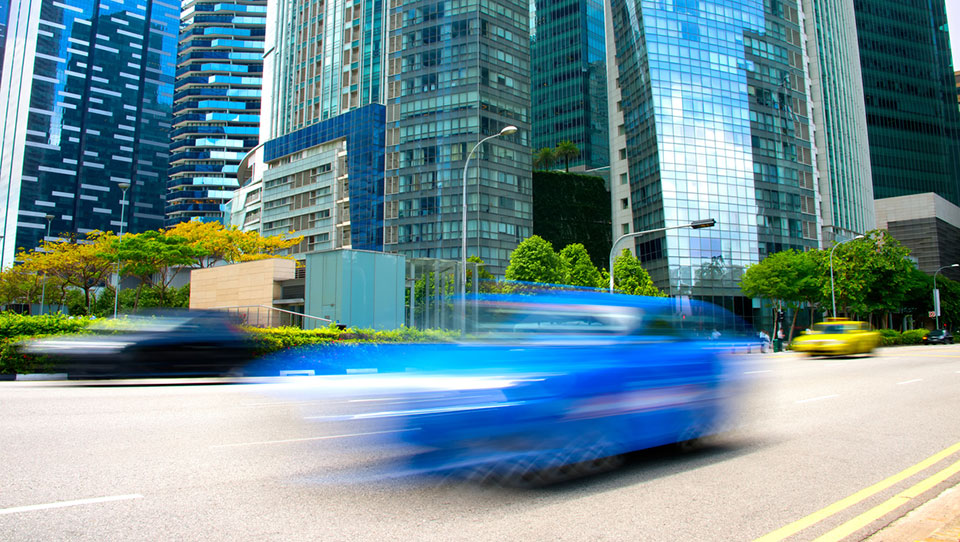 Prime Minister Lee Hsien Loong doesn’t want to be drawn into talking about the country’s response to the coronavirus – and is still warning about the ‘very grave’ challenge ahead. Yet, outside of the Lion City, others have got plenty to say about the response here. From thorough tracking to an effective – and early – lockdown to a ‘solidarity budget’, the measures have resonated with people in other parts of the globe.

We’re still at the early stages of events that are going to be analyzed and written about for years to come. Just as now it might pay now to be reading books such as When Genius Failed or The Big Short (both picked here as part of IG’s top trading books) to understand volatility and crises of days gone by, the works were written about the current period will be studied closely for decades to come. Put simply, the actions of today will resonate for a long time.

For a country that sits at the heart of global trade and prides itself on being attractive to overseas entrepreneurs and investors, it’s always important to understand what the world is thinking. Reputation will matter a lot – be that in the aforementioned history books of the future or when it comes to the ‘race to reopen’ later in the year.

A good gauge of the extent to which Singapore’s response has been recognized by the world overcomes not necessarily from policymakers, but the fact that even songstress Barbra Streisand is holding the country up as a positive example. On March 30th, Grammy award winner tweeted: “The Prime Minister of Singapore (a country that only has three deaths out of 6 million people) speaks such common sense. He tells people the truth and they did everything that needed to be done to be ready for this virus.” 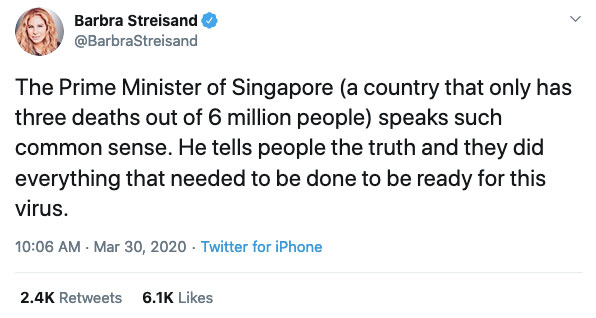 Still, while Streisand’s words may be nice – and a good sign of how widespread knowledge is of Singapore’s Covid-19 response – it’s perhaps in more serious circles that the most telling talk is happening.

Take Germany, for example. Despite being held up by European neighbors for its ability to test lots of people – and to avoid high numbers of deaths – this is still a country that is looking to Singapore for inspiration. Writing for Deutsche Welle, Christina zur Nedden argued: “This crisis is not only a health crisis but a crisis of management — from the late reaction to the implications for personal freedom. We should expect our leaders to secure both health and freedom, and we need to investigate why they have failed — and what we can learn from Singapore.”

Such is the admiration for Singapore in Germany, that the country is now looking to develop its own tracking app to mimic the approach taken here.

Writing for the World Economic Forum, Philip J Heijmans looked at what European nations could learn from Singapore. Although he highlighted the different circumstances that might prevent others from adopting the exact same blueprint, he concluded: “What Singapore is showing the world is that when all the stars are aligned, the virus may not be as uncontrollable as feared.”

In America, meanwhile, four epidemiologists at the Harvard T.H. Chan School of Public Health labelled Singapore as being the ‘gold standard of near-perfect detection’.

Yet the loudest voices in favor of Singapore have come from the World Health Organisation – the body at the heart of the globe’s efforts to combat the pandemic.

Indeed, Dale Fisher, chair of the World Health Organization (WHO) Global Outbreak Alert and Response Network “All the things that Singapore has in place, any country under lockdown will need to do these, or implement these during the lockdown, so that they can be safe afterward.”

Director-general Tedros Adhanom Ghebreyesus also told the media: “We are very impressed with the efforts they are making to find every case, follow up with contacts, and stop transmission.”

The virus is a huge challenge for everyone, right across the world. How it’s handled matters not just in the short term, to safeguard peoples’ lives, but also in the medium to long term from a reputational sense. In that case, at least, Singapore is performing well in the eyes of other countries.

Here’s the latest list by the CEOWORLD magazine Rankings. Here’s what you’ve missed?
Countries With The Highest Life Expectancy.
World’s Most (And Least) Religious Countries.
World’s Best Countries For Investment In Travel And Tourism Sector.

tweet
share on Facebookshare on Twittershare on Pinterestshare on LinkedInshare on Redditshare on VKontakteshare on Email
Ryan MillerJune 19, 2020