Spain has been recognized as the best country in the world for business expats in 2019, according to CEOWORLD magazine, while Singapore and Portugal placed second and third, respectively. The 2019 International Executives Mobility Study placed Japan in fourth ahead of Taiwan into fifth; while Finland ranked sixth, and Canada seventh.

Overall, among the top 10 best countries for business expats in 2019, the eighth, ninth, and tenth positions are held by the United Arab Emirates, Israel, and Portugal. Estonia took the No. 11 spot, followed by Australia (No.12) and Germany (No.13).

Rise of Finland and Portugal: According to the report, Finland (6th) and Portugal (10th) continue to impress expats with the quality of life and of family relocation (ranking 18th and 16th, in 2018, respectively). Nigeria ranks last once again, a position it also held in 2018 and from 2013 to 2016. 2018’s number one Canada, still features in the top 10 but drops to seventh place.

Meanwhile, Costa Rica ranked No. 14 in the CEOWORLD magazine’s ranking of the best countries for business expats in the world for 2019.

Spain is one of four European countries in the top ten with perennial top-ten regular Switzerland (in 3rd), joined for the first time by Finland (up from 18th in 2018 to 6th) and Portugal (up from 16th to 10th). Out of 68 best countries for business expats in the world for 2019, the Netherlands ranked No. 20th.

Best countries in the world for business expats in 2019 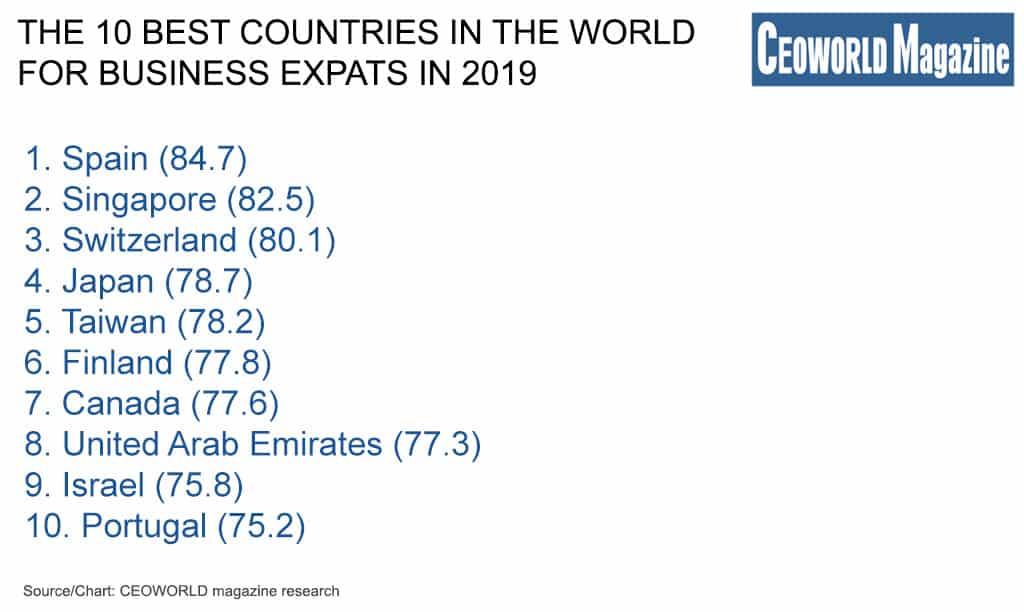 The rankings are based on six major metrics. Overall Score (100%) is the sum of:

* An expat (expatriate) is a person who lives outside their native country.
* There is two types of business expats (also know as business expatriates).
* Category A expats: Multinationals send employees to foreign countries to work in branch offices or subsidiaries.
* Category B expats: Independent expats for business abroad.
* The survey involved respondents from 95 countries and was conducted between April 12 and September 19 this year.
* Detailed survey data and information collected directly from 112,000 Individuals, across 6 data points.
* The overall score is numerical scores given to a country based on business expats and international industry recruiters feedback. Total scores are out of 100.
* Surveys completed by 105,000 business expats and 7000 international industry recruiters around the world.
* The Ratings for structures are then generated as follows:
* For group 1, scale AAA, AA, and A — For group 2, scale BBB, BB, and B — For group 3, scale CCC and CC
* The margin of sampling error for the full sample of 115,000 respondents is plus or minus 1.2 percentage points. In addition to sampling error, one should bear in mind that as in all survey research, there are possible sources of error—such as coverage, nonresponse, and measurement error——that could affect the results.

tweet
share on Facebookshare on Twittershare on Pinterestshare on LinkedInshare on Redditshare on VKontakteshare on Email
Anna PapadopoulosOctober 9, 2019