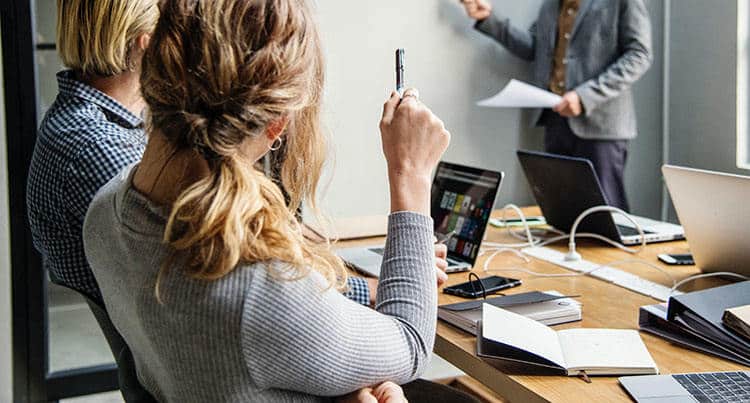 Promptly, at 7:30 am on the second Wednesday of every month, I meet with a small group of friends. All of them are CEOs. Of course, we have a lot in common. It can be lonely at the helm. So, we get together monthly to support each other.

During our last meeting, I wasn’t surprised when one of them told me he got a call from our alma mater’s fundraisers. He knew my business and he was familiar with the fact that I refer to myself as a ‘ticked-off donor’ so he figured he’d share his experience.

“What happened, Mike? What did she say?” I asked.

“She said she wanted to meet with me to update me on what’s going on at the school. She mentioned something about a big $1.5 billion campaign. She said it was called Fearless Ideas,” he responded.

“Ooooh, ahhh,” the five of us could be heard saying in unison as, together, we shook our hands near our wide-eyed faces as we chuckled.

“So, did you meet with her?” one of the others asked.

“No,” he responded. “I don’t have time. I really just like the sports teams and they’re not doing so well. And besides, I certainly don’t have $1.5 billion dollars to give them.”

Then, something happened at the other end of the table where Daniel sat. He’s the quiet one of the group who recently sold his business (so he could afford to give and spend some time on his philanthropic interests). He doesn’t say much at our breakfast meetings. But when he does, his words are always the most pointed and decisive. We could sense he was winding up to dispense some wisdom so, in unison, we turned our heads in his direction. His proclamation was poignant.

“Ouch!” I thought to myself as I sighed.

But why do they suck? In this instance, they approached the right guy. Mike is a successful serial entrepreneur. He’s not poor! The fundraiser was wise to call him, but she failed to appeal to his needs and provide value in a relatable way that would help her land an appointment.

I know that. Mike knows that. And you probably know that too. But does she? I don’t think so.

A chasm exists between too many fundraisers at well-meaning charities and the deep-pocketed CEOs they desperately want to solicit. Of course, their aim is to raise money for their employers’ good causes. But, too often they are poorly trained, underpaid, and overworked. Time and again their leaders press them to close big gifts quickly, so they focus on their personal and organizational needs, and neglect the needs of their donor prospects.

Never mind the fact that Mike didn’t want to be updated. He didn’t see the value of that offer. Plus, he got scared by the $1.5 billion figure.

“Gosh that’s big,” he probably thought to himself. “I couldn’t possibly make a dent in that amount,” is likely what he feared.

The exchange was empty and emotionless. It was all about the school and the solicitor when it should have been about Mike, his experiences at the school, and how they were interrelated with his business successes and his current life.

Of course, Mike didn’t take the time to review and psychoanalyze the brief conversation. Why would he bother? But I will, because this article is intended to help CEOs, like you, understand what’s going on and how they can help change the status quo.

The bottom line is that too many charities are under too much pressure. Their business models are complex. Not only do they have to figure out how to efficiently serve the beneficiaries of their supporters’ donations at low cost, but they also have to effectively serve their donors’, volunteers’, and board members’ pragmatic, emotional, and sometimes spiritual needs. Yet too few understand relationship-based selling because sales are a dirty word in the charitable sector.

“I’m not a salesperson,” a fundraiser might say indignantly. “I’m a do-gooder!”

Yet, salespeople know that it’s only after relationships have been established and cultivated that deals get closed. CEOs know this too. They know all about relationship selling and the value of patience.

But something goofy happens when they step in their beloved charities’ boardrooms. They stop asking about pipelines and stages of relationships and, instead, inquire about bottom-line dollars and cents. Plus, since their time is precious, they demand the briefest explanations possible. Then, in some instances, they only give fundraisers a few minutes to deliver their updates.

With such meager windows and such narrow leadership interests, is it any wonder that fundraisers focus too heavily on achieving results quickly and not enough on building relationships patiently and deliberately? All the while, donors like Mike and Daniel are left wondering, “What’s in it for me?”

Major supporters have needs and they want to gain value from the charities they support. They want to feel the warm glow associated with giving. Philanthropy lifts them up and makes them feel alive. In fact, many say it actually sets their hearts on fire and ignites their emotions. Giving can make them feel young again or provide spiritual sensations, especially if it helps support the practice of their religion. It can help them feel exponentially more connected with their communities and rid them of fears associated with loneliness.

Giving also provides some with notoriety while others benefit from an opportunity to right wrongs or give back. And don’t forget that many gain tax benefits, although they’ll rarely say that’s the sole reason for their philanthropic acts.

The bottom line is that giving helps people like you, CEOs, feel like heroes in their own life stories. Supporting others supports their pursuit of finding meaning in their lives and enables them to honor or memorialize others so they can live on in the minds of others for all time.

But all of this value cannot be derived through impatient, narcissistic updates and solicitations. No! Value can only be realized when relationships — based on trust and confidence — yield fair exchanges of dollars for good feelings, fulfilled aspirations, and enjoyable experiences. And the CEOs giving to charities or sitting on their boards need to recognize this simple, verifiable truth. To help bridge the chasm they need to stop pressuring fundraisers and start helping them understand the value of relationships.

#Engagement Fundraising: How to raise more money for less in the 21st century. MarketSmart (September 4, 2018).

The 10 must-read business and leadership books:

tweet
share on Facebookshare on Twittershare on Pinterestshare on LinkedInshare on Redditshare on VKontakteshare on Email
Greg WarnerOctober 9, 2018