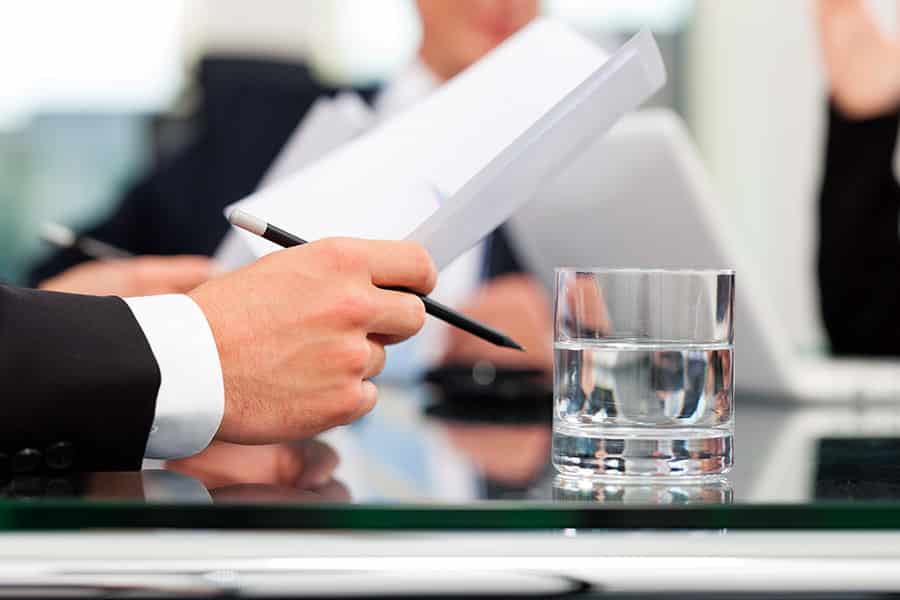 As a parent of two grown children I reflect back on some of the advice I gave to my daughters when they were growing up. One piece of wisdom that I shared was that there was a difference between book-smart and street-smart. They might love to read and achieve top grades in school yet they would be able to navigate the challenges in life to achieve their potential and accomplish their goals? Over the years I have learned that it is far more difficult to be a great leader than it is to understand the qualities of great leaders. One can be book-smart about leadership yet how does one achieve the street-smarts of leadership to actually become a great leader?

Having knowledge is one thing; having wisdom is yet another attribute altogether. “You can be the smartest person in the room, but if you don’t think through the situation in the moment, consider the possibilities and implications, and believe in where you are and where you want to go – the solutions will evade you. And one of the reasons followers follow leaders is because they offer solutions that make sense and seem reasonable…I believe it is imperative for effective leaders to step back from the hullabaloo of the moment and refresh themselves by reflecting” (Fickenscher, 2013, Loc. 571-577).

In ‘The Wizard of Oz’, “the Scarecrow thinks he has no brain, but in fact he is a highly reflective thinker and given a little time to think he produces amazing solutions to problems. There is a scene in the forest where Dorothy and the Scarecrow stop to pick some apples but the apple tree does not want to hand over the fruit so easily and puts up a fight. The scarecrow hatches a plan to annoy the tree and he taunts the tree until it becomes so angry it starts to throw apples at him, letting go of the very thing it desperately wanted to hold on to. Ultimately it is the scarecrow that puts together the plan to rescue Dorothy from the castle of the Wicked Witch” (Spectrain.co.uk, 2014).

The Scarecrow’s capability to reflect in the moment is a skill that helped to keep the team on a positive path to the Land of Oz. “Thinking is not simply about ideas. In fact, thinking may not even be the right word. It’s probably more accurate to say contemplating. It’s about collecting our thoughts, reflecting for a moment, and then moving forward. In life, far too many leaders fail to adhere to this simple adage of: think and reflect, then move on…it’s a guaranteed formula for failure if we don’t reflect…too often, the leaders hear themselves or listen to one another without paying attention to the questions being asked by their followers. Listening to followers is a difficult but important task – perhaps one of the most important tasks for leaders. Listening – whether you are in the midst of a storm or enjoying the quiet of the afternoon – is really, really important” (Fickenscher, 2013, Loc. 504-528).

While the Scarecrow, Dorothy, the Tin Man and the Lion were provided with very specific guidance to follow the yellow brick road in order to reach Oz to meet the Wizard, they did not anticipate the difficulties they would face along the way. Nor did they anticipate when they reached Oz they would be given the herculean task of returning with the Wicked Witch of the West’s broom in order to have the Wizard grant their requests. The task to acquire the witch’s broom is an adaptive leadership challenge. Adaptive leadership is “the practice of mobilizing people to not only survive difficult challenges but thrive. “Thriving” in this sense means growing, improving, capitalizing on the change” (Adaptive Leadership, 2014).

As the Wizard pushes our band of characters back into the forest in search of the Witch’s castle, they do not know how they are going to acquire the Witch’s broom, they only know they must get it. When faced with a very difficult and complex problem to which no one individual has ‘the answer,’ solutions will evolve over time through the group’s interaction and shared experience. There are many examples of how our heroes learn how to solve this problem together. For example, when the Wicked Witch orders the Flying Monkeys to mug the Scarecrow, Tin Man and Lion, then kidnap Dorothy and Toto, it is the Scarecrow with his straw pulled from him and laying all over the forest floor, who gathers the strength to urge his comrades to put him together.

Later, when Toto escapes the witch’s castle and races back to find the three of them together, it is the Scarecrow who figures out that Toto has come to take them to Dorothy. While the Tin Man struggles to climb the mountain to the Witch’s castle he figures out how to work as a team, to use the Lion’s strength and tail, to help him ascend. Upon reaching the castle, it is the Scarecrow who hatches a plan for how to enter the castle with the plan for the Lion leading the way. However, they must quickly adapt their initial plan when they are discovered by three of the Witch’s guards. They end up in a brawl where they knock out the guards and take the guard’s uniforms. This fight was not planned yet its outcome drew them closer to their goal. Next, because they have taken the guard’s uniforms they are able to easily slip into the castle marching behind the last guard as the draw bridge begins to close behind them. Together, they solve the difficult and seemingly impossible task of entering the well-guarded, mote protected castle through adaptive problem solving. 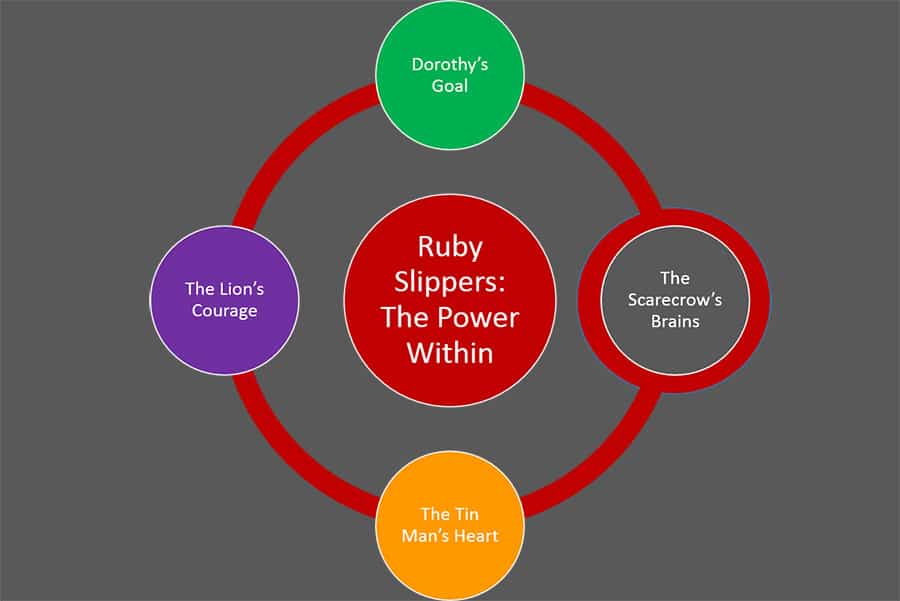 “Adaptive challenges are difficult because their solutions require people to change their ways. Unlike known or routine problem solving for which past ways of thinking, relating, and operating are sufficient for achieving positive outcomes, adaptive work demands three very tough human tasks: figuring out what to conserve from past practices, figuring out what to discard from past practices, and inventing new ways that build from the best of the past” (Heifetz, Grashow, Linsky, 2009, p. 69). This is illustrated again once in the castle. Through Toto’s well-timed barking they are led up the staircase by Toto and confronted with yet another difficult job, opening the massive, locked door that imprisons Dorothy. Our heroes improvise by using the Tin Man’s ax to break down the door, freeing Dorothy. Later, as they attempt to escape the castle, the doors slam shut and they are foiled again as the Wicked Witch and her castle guards move in; it is the Scarecrow again that notices the opportunity.

The fire lit chandelier is looming above the castle guards. In the heat of the showdown, the Scarecrow grabs the ax from the Tin Man and splits the rope holding the chandelier on high. The chandelier falls on the castle guards enabling our band of four to escape once again. A chase ensues through the castle and it is the Scarecrow who sneaks Dorothy, Toto, the Tin Man and the Lion away from the guards. Soon after they are trapped on the guard path of the outer castle wall. As the Wicked Witch attempts to burn the Scarecrow with her now burning broom it is Dorothy facing her own imminent death who grabs a bucket of water to put out the Scarecrow’s burning arm while at the same time soaking the Wicked Witch and unknowingly causing her death. The guards joyous and celebrating the Wicked Witch’s death graciously gift the Witch’s broom to Dorothy. From these examples we can appreciate that “leadership…requires a learning strategy. A leader has to engage people in facing the challenge, adjusting their values, changing perspectives, and developing new habits of behavior. One may lead with no more than a question in hand” (Heifetz, 1994, p. 276). In this case, the catalyst is the Wizard’s promise, “Bring me her broomstick, and I’ll grant your requests” (Screenplays for you, 2014).

This article, the fourth in a five-part series published by CEOWorld Magazine, examines leadership through the lens of L. Frank Baum’s ‘The Wonderful Wizard of Oz’. The author, Jonathan Stutz, believes a leader’s success is dependent upon a belief in oneself, having a goal for a better future, wisdom, emotional intelligence, and a willingness to take action. Throughout this series you will learn that developing these combined capabilities is a journey, a road filled with difficulties and obstacles. Stutz’s insights demonstrate that Baum’s fantasy provides a platform for leaders to reflect and gain perspective on their own journey down the yellow brick road of leadership.

By Jonathan Stutz is a Policy Director at the Microsoft Corporation leading a team in the Trustworthy Computing group (www.microsoft.com/twc). His 18 year career at Microsoft has encompassed Human Resources, Cultural Diversity and Inclusion, Global Readiness, Training, Community Building, Business Development, and Business Operations. Jonathan earned his B.A. in Political Science from the University of Washington (Seattle) and his M.A. in Leadership from City University of Seattle.  Jonathan and his wife live in Bellevue, WA, a suburb of Seattle where he is an avid runner and hiker. You can contact Jonathan on Twitter @jmstutz

tweet
share on Facebookshare on Twittershare on Pinterestshare on LinkedInshare on Redditshare on VKontakteshare on Email
Featured columnistsJune 15, 2014