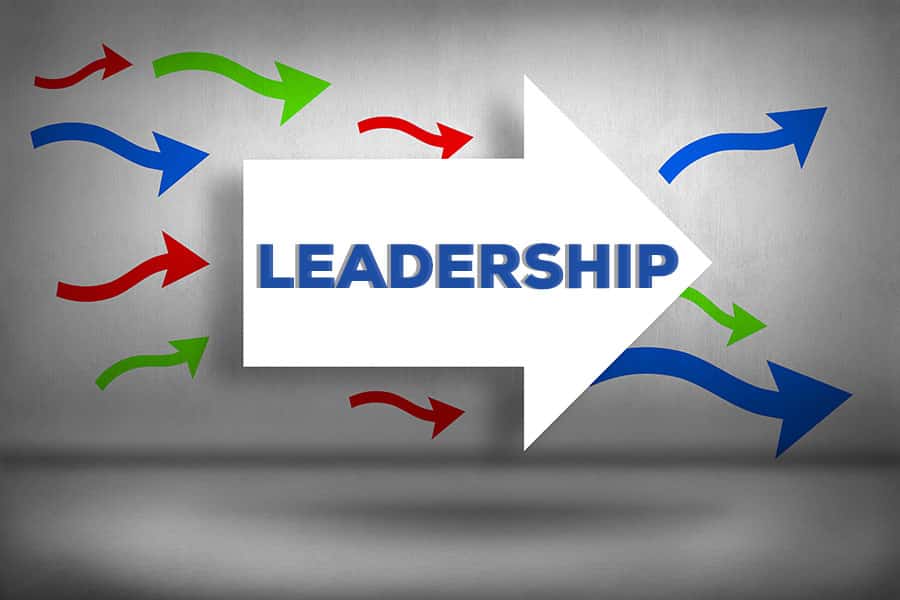 Seven years ago when my daughter was graduating high school she told my wife and me that she wanted to go to medical school one day. We had no clue at that time what obstacles she would face along the way. Katie faced many challenges over the years since that first announcement and through each obstacle, no matter how difficult or complex, she continued to repeat to us and anyone within ear shot that she was going to become a medical doctor.

There were many times where my wife and I were deeply concerned she might not succeed and as parents wondered how she would respond to a life-altering defeat. This past week Katie completed her first year of medical school. She found a way to overcome each of the hurdles that were put on her yellow brick road. Katie has direction and like Dorothy Gale in the Wizard of Oz, she never stopped thinking about her goal. Dorothy wanted to go home and no matter the size of the challenge she was determined to get there.

Dorothy and Katie have vision and clarity of purpose. Dorothy “overcame the many obstacles that she encountered, no matter how daunting. No menacing trees throwing apples would stop her. No poppy fields with sleeping potion could keep her down. No big, intimidating door would keep her locked up…nothing was going to stop Dorothy from moving forward toward her goal. She was focused and determined to get where she was going – home” (Power of Positivity, 2014). Dorothy also had clarity of purpose, telling everyone that she met there’s no place like home. “She came to realize this. With all of her incredible adventures and friendships along the way, this was her constant goal throughout the storyline. She never lost this very clear picture of the future, in spite of all the distractions” (LeadershipTraq, 2013).

In the book, “Toto’s Reflections: The Leadership Lessons from the Wizard of Oz”, the author writes in the voice of Toto. In Toto’s words we learn that [Dorothy’s] “values and beliefs were rooted in the notion of ‘home’ as a place of security. And so, we all got behind her to help make that dream of going home to Kansas a reality. We knew where she wanted to go, and we believed the dream with her. That’s the essence of commitment. When we believe something so much that we start telling everyone around us about it. Commitment is accepting the leader’s perspective and making it our own. When you’ve created commitment among those who follow you as a leader, you can change anything!!” (Fickenscher, 2013, Loc. 699-705). 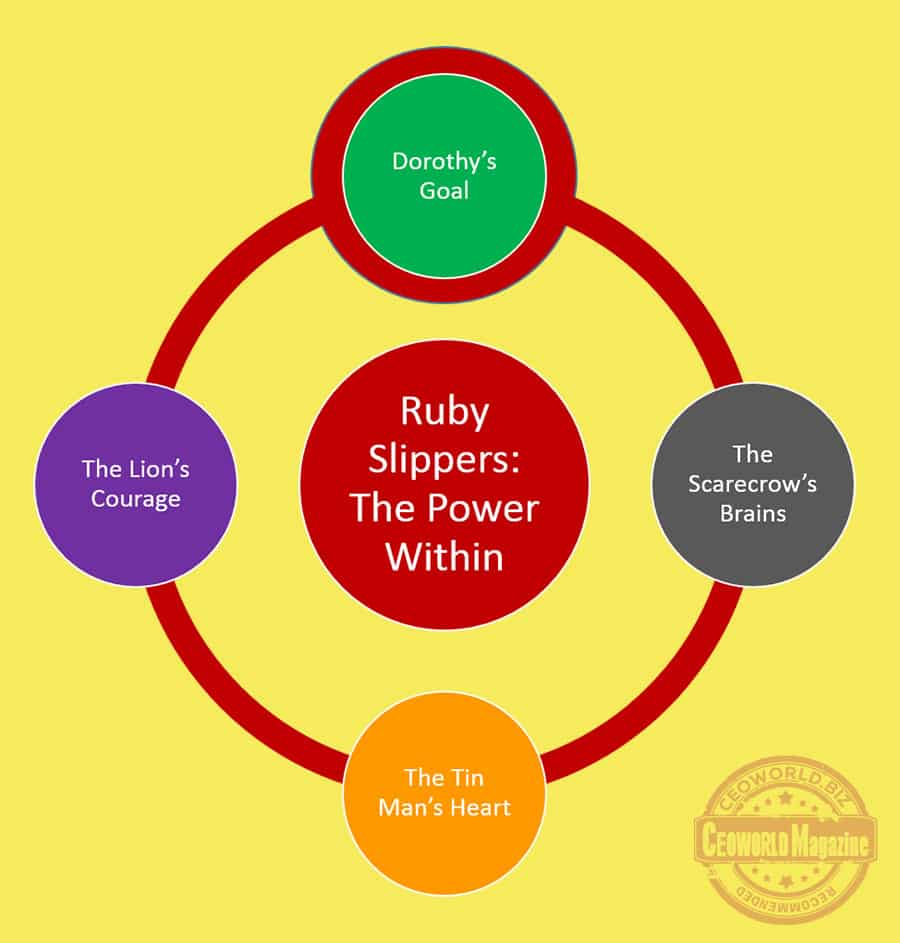 Dorothy had commitment to a goal that gave her direction. The goal motivated those around her to not only join her on the journey but also to do everything in their power to help her succeed. “Show you are committed – embrace your followers, share your thoughts and listen when your followers respond. Driving commitment requires repetition – if you say it over and over again, your followers will get what you are saying and start living it with you. Repetition helps drive the importance of what you are saying so that your followers will not lose sight of what you are attempting to accomplish over time. Furthermore, by continuously speaking up and sharing your commitment, you will be able to scatter the energy of those who would undermine your objectives” (Fickenscher, 2013, Loc.717-723).

Yet Dorothy did more than tell everyone she wanted to go home. Very importantly, she was able to align her individual goals with the goals of the group. Leadership is much more than telling people to go down the yellow brick road. It’s about authentically engaging them in the adventure. Effective leaders will invest the time to understand what individual team members’ goals can be achieved through the team’s goals. Why? Because individual team members will often ask themselves, what’s in it for me?

“Exceptional teamwork derives from aligned WIIFM (What’s in it for me?). The reasons why each of the protagonists want to go to Oz are different, but the destination is the same. Everyone needs to get to the Emerald City to see the Wizard. The journey is safer and more productive traveling together, and ultimately the Scarecrow, the Tin Man, Lion and Dorothy become a powerful team that defeats their nemesis and creates a better future for Oz. Great causes must accommodate individual purposes. Effective leaders seek to understand the personal needs and motivations of followers, and help to align individual purposes with the higher purpose of the organization” (Yusoontom, 2012).

To achieve alignment of her team Dorothy takes a participative approach to leadership. Participative leadership is “primarily a relations-oriented behavior [and] also has implications for achieving task objectives and implementing change” (Yukl, 2013, p. 106). Clearly all three are in play throughout Dorothy’s journey to Oz. At one time or another we observe all of the characters utilizing participative leadership as they face circumstances with variables that demand a custom approach to be effective. Sometimes the Scarecrow will make a decision without asking for the opinion of the others, such as the plan to enter the Witch’s castle to rescue Dorothy.

In this same instance the Scarecrow demonstrates delegation capabilities by telling the Lion that he will lead them into the castle. At other points in time the group makes a joint decision such as when Dorothy whispers to the Scarecrow about inviting the Tin Man to join them for the trip to Oz, and again later when the Scarecrow consults with Dorothy and the Tin Man about including the Lion on the journey to help him with his lack of courage. There are “four potential benefits [of participative leadership that] include higher decision quality, higher decision acceptance by participants, more satisfaction with the decision process, and more development of decision-making skills” (Yukl, 2013, p. 107-108).

The overall success of participative leadership for Dorothy in achieving her personal goals as well as the goals of her teammates is based upon their ability to each have a sense of ownership and accountability for the success of the overall journey to Oz. While the research indicates that the effects of participative leadership are mixed, “the lack of consistent results about the effectiveness of participative leadership reflects that each type of participative decision procedure is effective in some situations but not in others” (Yuki, 2013, p. 111). The varied and situational-sensitive manner in which Dorothy, the Scarecrow, the Tin Man and the Lion utilize participative leadership were contributing factors in their success. As well, they each bring unique characteristics (i.e., knowledge, skills and abilities) that the others are able to appreciate even when they do not see these qualities within themselves. It is the diversity of this team, the differences between each of them, which help to make them a strong and powerful force against the Wicked Witch of the West. The team’s awareness and then consideration for these differences in their work together is another key factor contributing to their overall success in achieving the team goal of meeting the Wizard of Oz as well as each individual’s personal goals of a heart, a brain, the nerve and a home.

This article, the third in a five-part series published by CEOWorld Magazine, examines leadership through the lens of L. Frank Baum’s ‘The Wonderful Wizard of Oz’. The author, Jonathan Stutz, believes a leader’s success is dependent upon a belief in oneself, having a goal for a better future, wisdom, emotional intelligence, and a willingness to take action. Throughout this series you will learn that developing these combined capabilities is a journey, a road filled with difficulties and obstacles. Stutz’s insights demonstrate that Baum’s fantasy provides a platform for leaders to reflect and gain perspective on their own journey down the yellow brick road of leadership.

By, Jonathan Stutz is a Policy Director at the Microsoft Corporation leading a team in the Trustworthy Computing group (www.microsoft.com/twc). His 18 year career at Microsoft has encompassed Human Resources, Cultural Diversity and Inclusion, Global Readiness, Training, Community Building, Business Development, and Business Operations. Jonathan earned his B.A. in Political Science from the University of Washington (Seattle) and is completing his Master’s in Organizational Leadership this June from City University of Seattle. Jonathan and his wife live in Bellevue, WA, a suburb of Seattle where he is an avid runner and hiker. You can contact Jonathan on Twitter @jmstutz

tweet
share on Facebookshare on Twittershare on Pinterestshare on LinkedInshare on Redditshare on VKontakteshare on Email
Featured columnistsJune 9, 2014