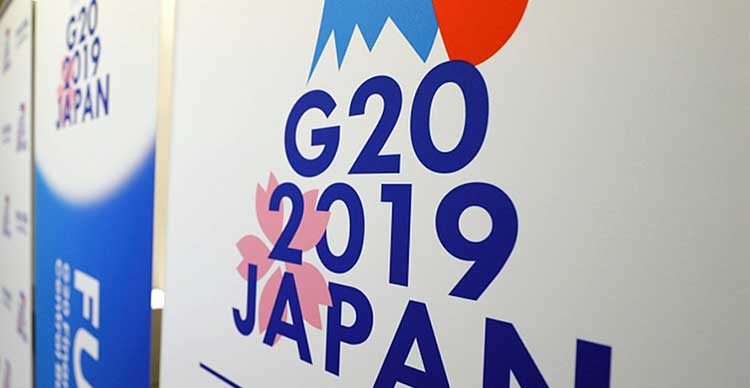 > With the words of Mr. Koji Tomita ( Ambassador, Representative of the Government of Japan for the G20 Summit).

> in his publication “On the upcoming Osaka G20 Summit.”

> for the Association of Japanese Institutes of Strategic Studies.

The G20 process started as a crisis management exercise in the wake of the Lehman Shock.

Since then, the global economy has enjoyed a relative calm, but now downturn risks are observed.

How to prevent those risks will be a key challenge for Osaka.

Priorities of the G20 Osaka summit :

First, efforts to achieve sustainable growth of the global economy; secondly, wide-ranging efforts to address global challenges; and finally, how to harness the power of technological innovation.

Sustainable growth in the global economy :

As mentioned earlier, the current economic situation is nothing comparable to 2008, but if the situation turns for the worse, the G20 leaders need to be ready to respond effectively.

Efforts to remove the existing uncertainties :

One of the most urgent tasks facing the G20 members is to regain confidence in the multilateral trading system, given the fact that trade tensions have started to weigh heavily on prospects for growth.

Reform of the WTO :

Although the G20 is not a negotiating forum, the G20 can and should provide strong political impetus for a better functioning WTO, attuned to rapidly changing global trading environments such as explosive growth in e-commerce.

Representing 80% of the global economy, the G20 members have to assume special responsibility by keeping their markets open and refraining from having recourse to such practices.

Japan aims to promote efforts for improved labor participation by women, as well as measures to foster environments conducive to greater empowerment, including education and entrepreneurship.

will be introduced to G20 debates as another important issue to be solved for more inclusive growth.

Despite very divergent demographic profiles, there has been strong support among the G20 members to deepening the discussions on this subject.

also remains an important concern, and the G20 will provide useful inputs to TICAD 7 hosted by Japan in August this year.

Japan would like to set forth effective international measures to tackle this problem.

is a crosscutting and overarching theme for the Osaka Summit …

There is a danger

that technological development will lead to a new divide within and across societies.

With these backgrounds, Prime Minister Abe, in his speech in Davos, expressed his determination to promote international debates on data governance.

The matter is serious enough

to merit the attention of world leaders, and Osaka could catalyze deeper and intensify global discussion in this area.

In conclusion, the common thread running through all these discussions is our desire to give people greater confidence in their future.

Regained confidence in the future is needed not only for sustainable growth but also for public support for multilateralism.

We very much hope that Osaka will make solid contributions to this end.