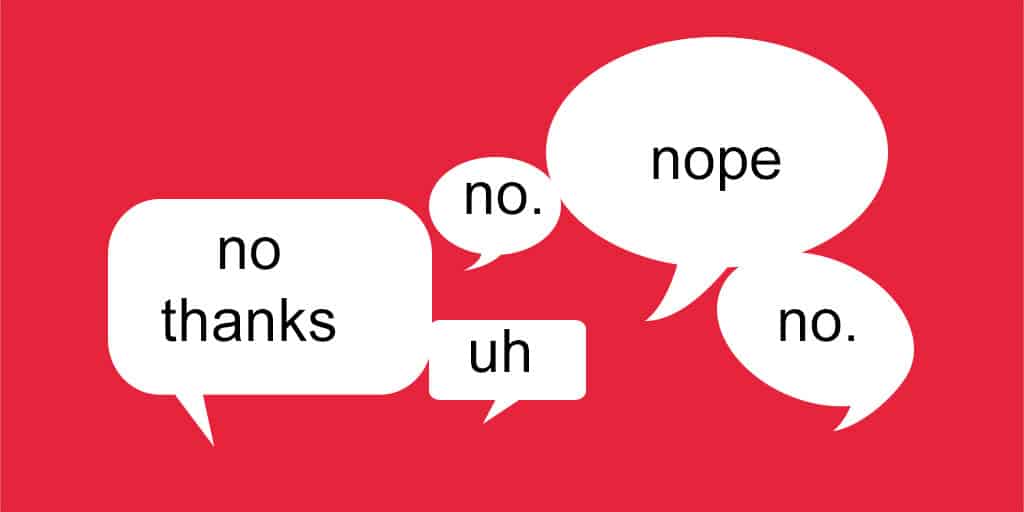 It wasn’t always this way, was it?

In 1982 First Lady Nancy Reagan famously coined and branded the phrase ‘Just say No,’ which was meant for children tempted by drug use in their lives. It was notably simple, and it worked for a while.  But somewhere along the nearly 40-year path since, “Just Say No” became “Just Say Yes,” and from my standpoint it’s not been a perfect panacea for business owners personally or professionally either.

Pouring through the research it appears that saying “Yes” frees you from the emotional reaction of saying “No” to someone, and hurting their feelings, or disagreeing with them, and making it look like you’re not on-board with the team, or not being fair. According to a recent Frontiers in Human Neuroscience study too much agreement, however, creates a culture of “conflict avoidance,” which in abundance is diminishing our objective critical thinking, over-whelming our busy lives, and weakening the impact of our authority.

As a CEO advisor these days I see a lot of Yessers. Each, like me, wanting to be liked and responsively amicable. Sometimes it’s straight-forward, other times it’s implied. As if being positive at every chance will make it so. But while “Yes” makes employees happy, what about the rest? Think about your business, your daily life. How many times a day do you say “Yes” in some way or another? Have you noticed the cumulative effect?

The Hidden Trouble with “Yes”

The trouble with saying “Yes” too much, which is to be excessively affirmative, is packed with hidden risk and exposure to other things which few likeable leaders seem to consider beforehand:

As a CEO, “Yes” should mean that you’ve already considered these, and all the other ramifications, risks & consequences, and agreed to them. But is that really true? Or are you saying “Yes” most of the time because it’s easy, and what you think everybody wants to hear from an approachable visionary leader?

In his article in Harvard Business Review: The Problem with Being Too Nice Michael Fertik offers a warning, “Nice is only good when it’s coupled with a rational perspective and the ability to make difficult choices.”

Too much “Yes”, and its hidden consequences, is therefore creating countless company cultures of affirmative risk-avoidance, and exposing you and your company to the negative effects of a fear-driven company culture that can’t say “No” to anything. And when that transformation is complete, precipitously bad and costly business decisions are not far behind.

The Path to “Less Yes”

The path to less “Yes” is to Just Say “No.” And by that, I mean to skip the trigger-finger temptation to use ‘being agreeable’ as your default communication method. My advice is to cut back on your exposure to Yesses each week. Easiest way is to reduce the number of staffers that report directly to you. Less direct-reports means less fire-fighting the little things and more delegating them. For upper management exchanges, try to be more like a friendly skeptic, like a doctor or advisor: a quick decision-maker who also has a contemplative restraint.

Nonetheless, having less direct reports and fire-fighting distractions will help you regain the real meaning and true value of saying “Yes” and reserving it for customers, and bigger issues with higher impact outcomes, Killer Decisions I call them. And be sure to use a decision-making tool for those, such as a Decision Ring that can help separate and weigh the options widely and evenly, not compulsively or emotionally.

Finally, if an idea to implement a lesser Yesser program sounds super amazing to you, then I invite you to join my new Just Say No – Practice & Training Club, wherein members can rediscover the meanings of “Yes” and “No.“ Upon graduation, on the one hand I expect you’ll be just as likeable if a bit less agreeable, but on the other hand pleasantly more able to identify and dispatch with the little Yesses and focus on the bigger ones. And when you do that, your new army of ninja skeptics may one day save your company, and make you a happier, healthier, and even more successful leader.

tweet
share on Facebookshare on Twittershare on Pinterestshare on LinkedInshare on Redditshare on VKontakteshare on Email
Rick AndradeMay 22, 2019