From the start of this year, there have been expectations on rising global growth including in Europe, but some indicators suddenly show something else.

In Japan and India, the new fiscal year started this month. In both countries, the governments have increased public consumption as much as politically and economically feasible. Further, in the United States, the massive tax reform contributes to even higher private consumption this year.

2018 started with growing momentum in global growth. Rightly, it came from a relatively low level but combined with the economic impulses from the United States, India, and Japan; there will be acceptable progress in global economic growth this year.

So, much that the International Monetary Fund (IMF) raised their global growth prospects with what I would describe as more than average compared to what they usually do.

The Eurozone has followed the same pattern with more economic activity in 2017 and at the entry to this year. But on Tuesday the 17th April, it happened – the German ZEW index plummeted for the second month in a row, and this time even quicker. It collides entirely with the mood from four months ago.

The ZEW index usually does not weigh heavily as an argument in my decisions. For the same reason, I, therefore, do not want to use it as a strong argument for a suddenly negative development.

The index includes a range of components that represent different developments in the German economy, but in total, it’s considered as a leading indicator. It also has to be said that ZEW publishes another index which showed a more sliding movement compared to the ZEW main index. But after all these reservations have been made, then the steep drop over the past two months is so significant that it gets my attention.

ZEW is an indicator of the current mood where the global trade dispute initiated by the United States is burdening, and the same applies to the situation in Syria. It is quite common that many in Germany react more negatively to this kind of developments compared to other countries.  A lower ZEW index is not unexpected and can be explained; therefore, it is not a big surprise. However, there are also other explanations behind the drop in the ZEW index, and they are worrying. 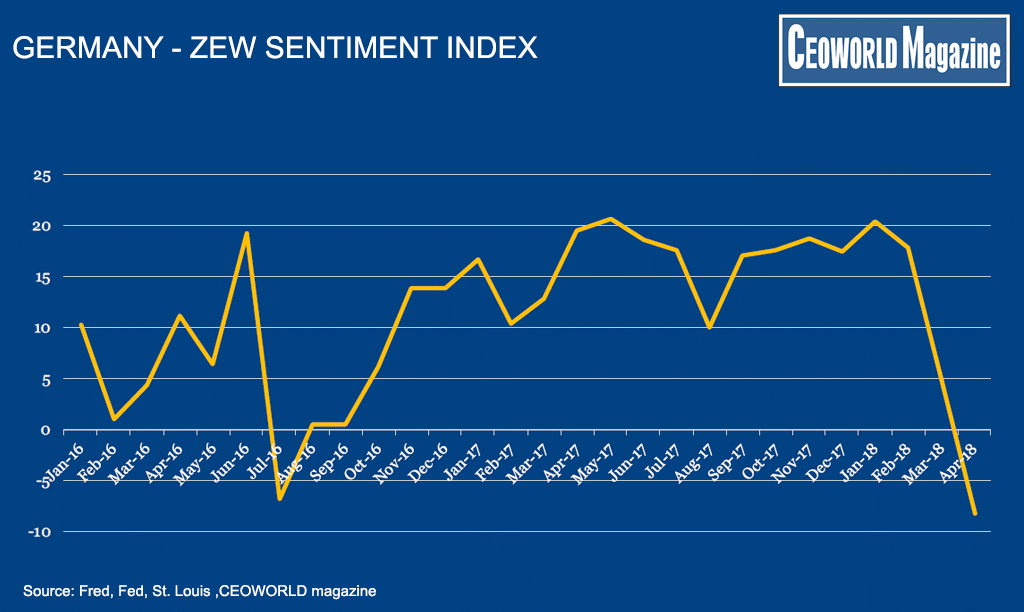 Decreasing industrial output, exports, and retail sales in Germany are also reasons for a lower index. Germany is of course, not equal to the Eurozone, but the country has a considerable weight in the basket, so I allow myself to give particular attention to Germany.

I have long been worried about the monthly change in the German retail sales as it has been negative every month from December to February.

A number of key economic indicators and expectation indices, such as business expectations and consumer confidence have also been weaker in the rest of the Eurozone towards the end of the first quarter. An example is shown in graphic two, with the change in industrial output for the entire Eurozone. It still a positive growth rate, but not as high as expected.

When I conclude on all these big and small fluctuations, then there has been a change from the last four months of 2017 compared to the last half of the first quarter of this year. I expect the financial market at the latest will respond to these developments when the GDP growth data for the first quarter are published. Though usually, economists begin to calculate the growth rate after a part of the economic data for March has been published- which should be pretty soon.

The economic impulses mentioned in the start of the article would normally support the European growth, meaning that 2018 should be a great year for the Eurozone. However, there is a growing tendency in many countries that governmental growth initiatives, including increased public spending, are primarily designed to promote domestic growth. A classic example is building infrastructure, but more and more spending is allocated to, for example, elderly care. Even the great American tax reform is designed to give families with lower middle incomes more room for spending. This extra disposal income might result in increased convenient restaurant visits, but not in buying a European-produced car.

One could say that global GDP growth today is not what it used to be, as growth doesn’t just spill over on other regions like earlier. For investors, it means that one must find growth sectors in the individual countries, which is demanding.

But the missing spillover does not explain Europe’s growth slow down alone – so what went wrong? 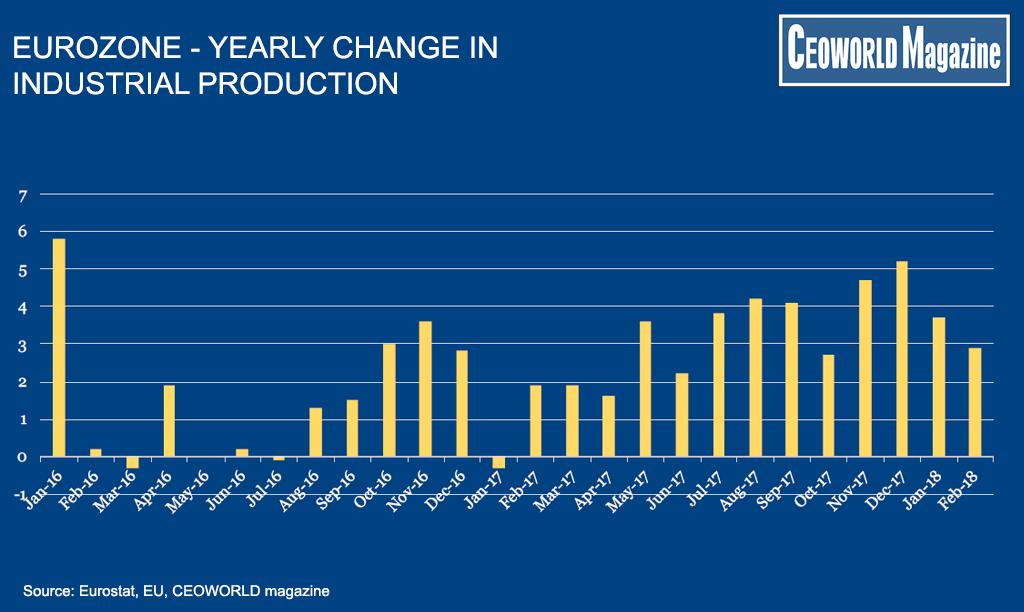 The improvement in growth last year was primarily due to increased domestic demand with increased business investments, continued progress in construction, and rising private consumption. For that wave to continue, it requires a robust recovery, but a lot of small hurdles emerged.

Like it has become modern among Eurozone governments to spend months on government negotiations after parliamentary elections – this creates uncertainty. There are strikes in several countries in Europe, and I have experienced economists pointing at causes such as the prolonged winter as well as the extensive epidemic outbreak of flu in Europe this spring.

All the hurdles may seem like small brakes, but if the Eurozone economy is fundamentally robust, it only means that the domestic-driven growth in the Eurozone is postponed to the second quarter.

I hope that is the case, then everything will be fine, but I have my doubts – though The European Central Bank remains optimistic as due to their latest reports, the central bank expects the Eurozone economy to grow with 2.5 pct. this year.