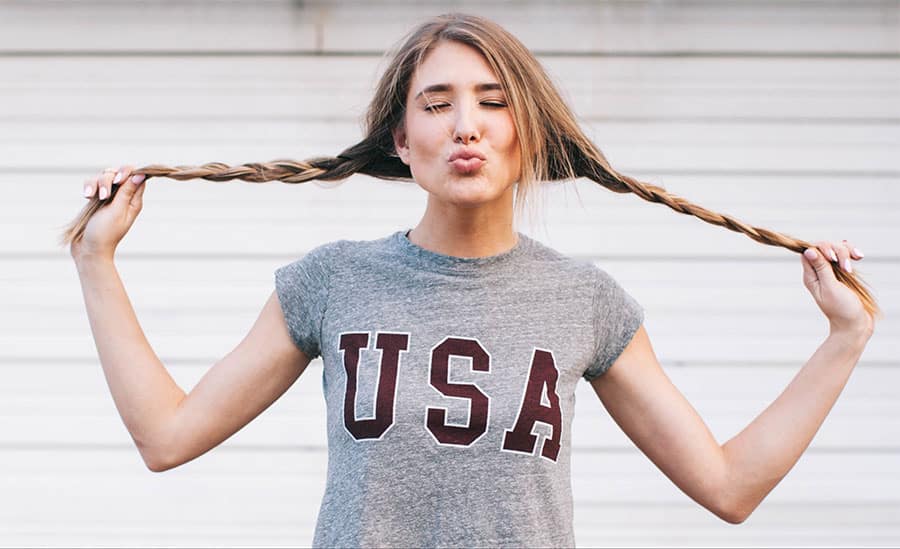 A recent infographic from career-matching platform Sokanu examined the happiness of workers in America, and how job satisfaction varies across both profession and location. According to the data, the happiest places to work include Hawaii, West Virginia, and Maine, while the states with the lowest career satisfaction are Washington, Rhode Island, and Vermont. The most satisfactory jobs meanwhile are mostly creative roles: film director, actor, DJ, choreographer, and video game designer, while those least happy with their careers have jobs such as debt collector, post office clerk, telemarketer, lab technician, and janitor. Looking at the kinds of roles with the highest and lowest satisfaction, we can identify two main factors that are the recipe for career satisfaction—creativity and control.

Indeed, one of Sokanu’s founders, Spencer Thompson, argues, “Creativity is vital to a satisfying career. The unhappiest category of careers on our list is law, with its notoriously stringent and unbending devotion to rules and exactness. On the other end of the scale, highly creative careers like those in film, music, and performing arts rate highly in satisfaction. The opportunity for creativity in a career may be more than just a bonus—it could be vital to your overall happiness.”

More creative roles, such as those within the film and music industries, allow people to express themselves and direct their unique personal qualities into their work. You could argue that the reverse is true of careers in law, or roles such as clerks and technicians. They are roles that in some ways encourage the removal of personal creativity, placing more importance on following rules or carrying out certain specific, repetitive actions. This can lead to diminished self-esteem and a feeling that their individual qualities are not being used constructively. Rather, they are simply there to complete a task in a fashion that has been predetermined. Athletes, meanwhile, after all their training, rely entirely on themselves to accomplish their goals.

This brings us to the second factor crucial to job satisfaction—control. This is something that tends to stem from being in a creative role. Although still working with others, directors and designers have a certain amount of control over how they work. As Thompson notes, “Control is something we tend to undervalue. Most people are told what to do, when to do it, and what to do it with. It’s not an accident that the most highly rated careers have atypical schedules or even set their own.” Having control allows us to better manage stress levels and productivity. This doesn’t just apply to those in highly rated or creative careers though. Many office workers now have the option, at least some of the time, to work from home, providing a degree of control that can contribute to higher career satisfaction. 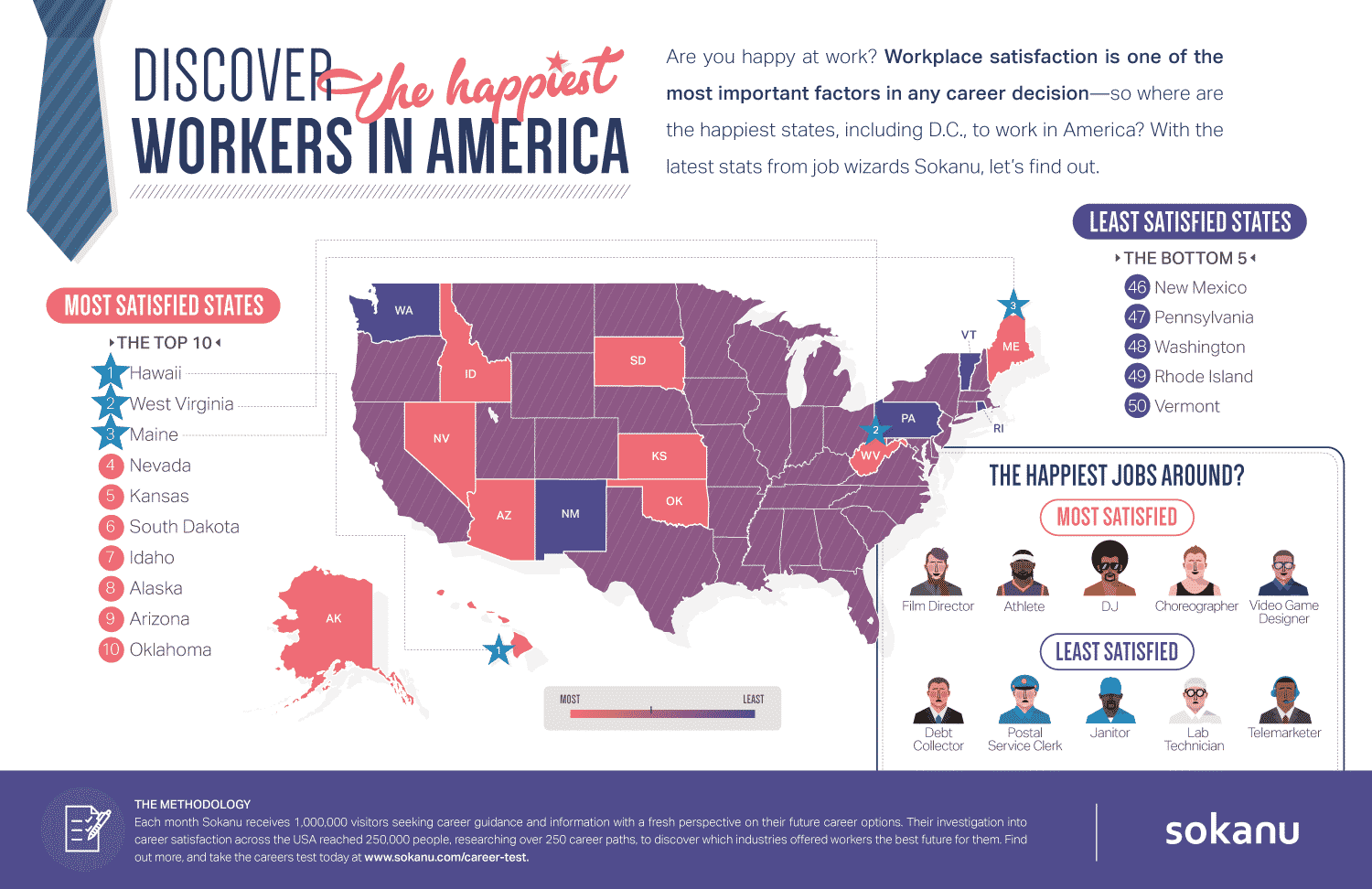 A lack of control is evident in those roles found to be the least satisfactory. Janitors, post office clerks, and lab technicians are all tied to their work locations—there is no leeway in their time spent onsite. The roles of janitors and clerks are also structured very much as Thompson describes—someone telling them what to do, when to do it, and how to do it. Lab technicians, meanwhile, work within strict guidelines, always performing tasks according to specific scientific methods.

The other least satisfactory roles are debt collector and telemarketer. These feature the same lack of control: following procedures and scripts, with the added disadvantage of their roles being perceived negatively by many. How many people are happy when a telemarketer calls? Or a debt collector? This negative perception is yet another aspect that is out of the hands of those working in these positions—something else they can’t control. They can’t influence what they do for a living. And compare the perception of their roles to that of, for example, a deejay, someone whose job it is to ensure everyone has fun dancing at clubs, parties, and bars. This highlights how having a job possessing even a moderate amount of control is indeed a privilege.

What can we learn, then, from those in creative roles? And can this be applied to jobs in less creative industries? Granting a certain amount of autonomy to one’s employees is a surefire way to make them feel more satisfied in their roles. Balancing autonomy and structure can be a tricky thing to achieve, but it’s worth it if it makes employees happier.

It’s best to start out slowly, and then gradually increase the amount of control an employee has over how they carry out their role. This should reduce any stress related to implementing such changes and prevent anything drastic from affecting their level of productivity.

Even if a role cannot afford the same level of control that, say, a film director enjoys, providing a perceived level of control within a set framework can still have a positive effect on someone’s happiness. As an employer, you can effectively set boundaries and still provide space within those parameters for an employee to work in a way that makes them happier.

Although creativity and control are not the only factors that determine career satisfaction, they certainly hold a significant amount of weight. This is also food for thought for those who have found themselves in roles they do not enjoy. Is there a way to gain more control over how you work? Is there a way to introduce more creativity to your role? If this creative input or increased autonomy is unlikely to materialize, you might want to consider a change in career.

Career tests can be a helpful tool to reveal what kind of job would suit you and give you the greatest satisfaction. Sokanu’s career test, for example, builds a psychometric model of who you are and matches it with potential career choices. Incorporating various factors, such as your ideal work environment, personality and interests, and skills preferences, the test matches them with positions that require your particular skills and interests, on-job activities, and other qualities in your desired workplace environment to provide as accurate a career match as possible.

A change in career is, of course, not possible for everybody, just as those living in the “least satisfied” states cannot necessarily suddenly move to the “happiest” ones. But happiness in your career is important, and any satisfaction or dissatisfaction experienced at work is sure to affect your life outside your job as well. Engaging yourself creatively, and being granted even a little more autonomy then, is highly important, and something to be pursued, whether in your current job or another.

Written by Irma Hunkeler, Head of Content at BlueGlass.

tweet
share on Facebookshare on Twittershare on Pinterestshare on LinkedInshare on Redditshare on VKontakteshare on Email
Irma HunkelerNovember 29, 2016

Irma works for BlueGlass, a digital marketing agency. Her experience includes working for clients in different industries such as travel, retail, recruitment, technology and charitable institutions. Extensive networking and meeting professionals across different industries, allow her to collaborate with industry experts for her writing.
view all posts