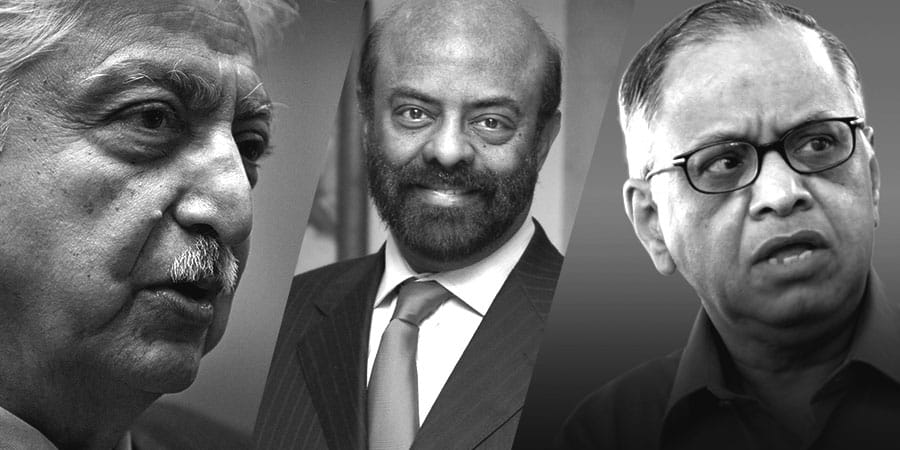 Technology is a combination of skill, technique, a method and above all a combination of all of these together. Technology has brought tremendous convenience to our lives by enhancing our abilities and therefore, has become an essential part of our everyday routine. Technology goes hand in hand with science to create a dynamic platform of endless advancements. Since technological developments have lifted the communication barriers to a matter of connecting globally within seconds, we are able to enjoy and benefit from this socially as well as economically. Internet, being the most outstanding achievement in the world of technology has contributed the most to businesses and their success. Technological innovations have brought about a new set of Billionaires. Here are the top technology based business successes of India as per the studies conducted by Economic Times and Forbes India.

1.  Azim Premji
Premji’s net worth is estimated to be 16.1 billion USD.
He continues to hold the top position year after year in the list of India’s Tech Billionaires. He is the Founder and Chairman of Wipro Limited, an international leader in the Software Industry. Apart from being a Founder of a leading Software company, Premji also owns a private equity fund that is worth 2 billion USD. Known as The Czar of the Indian IT sector, he is known to be a dedicated philanthropist and donates a good share of his personal wealth to charity on a regular basis.

2. Shiv Nadar
Net worth is estimated to be 11.7 billion USD.
Shiv is the Founder and Chairman of HCL enterprises, a multinational IT service company comprising of HCL Technologies, Infosystems and Healthcare. Nadar is sometimes also called as the “Magus” (a wizard) because of his efforts to develop the education system for India. Through his ‘Shiv Nadar Foundation’, his philanthropic activities are diversified in the areas of education, health and environment. Nadar is worth 11.7 billion USD and has been honoured with The Padma Bhushan (third largest civilian award of India) for his contributions in the IT industry.

3. NR Narayan Murthy
Net worth is estimated to be 1.87 billion USD.
He is the Co-founder of Infosys, a multinational corporation that provides technology, engineering and business consultancy services. Murthy withdrew from the board of directors of Infosys and became Chairman Emeritus in 2011 and rejoined as Additional Director and Executive Chairman of the board in 2013. He has been awarded with The Padma Vibhushan (second highest Civilian award) and The Padma Shri (fourth highest) and is described as the Father of Indian IT sector by Time Magazine. The Business pioneer is worth 1.9 billion USD and is the first Indian winner of Ernst and Young’s World Entrepreneur of the year award.

4.  Nandan Nilekani
Net worth is estimated to be 1.62 billion USD.
He is also a co-founder of Infosys and India’s National Association of Software and Service Companies (NASSCOM). He has also been a Chairman of the Unique Identification Authority of India (UIDAI). Nilekani is currently the Chairman of Ekstep, a non-profit literacy and numeracy platform. He has also been awarded with The Padma Vibhushan and named as Businessman of the year by Forbes Asia in the year 2006. His book Imagining India was one of the finalists in the FT-Goldman Sachs Book Award in 2009. For leading UIDAI, he has also won The Economist Social & Economic Innovation Award in 2014. Nilekani is worth 1.54 billion USD.

6. Binny Bansal and Sachin Bansal
These young Tech entrepreneurs are worth 1.24 billion USD each.
Bansal brothers are Software engineers and Internet entrepreneurs who together created Flipkart, India’s largest e-commerce platform. As their family names may suggest, they are not related but studied engineering together from Indian Institute of Technology, Delhi. The duo started the e-commerce company in 2007 for selling only books and years later became the top most e-commerce commercial platform. In 2015, they were ranked 86th in position by Forbes India Rich List.
|
7. K. Dinesh
Net worth is estimated to be 1.2 billion USD.
He is another Co-founder of Infosys is a self made tech billionaire who retired as the Head of Quality, Information Systems and the Communication Design Group in 2011. During his tenure at Infosys, he brought excellence to the company with his remarkable efforts in software quality processing. Since year 2016, Dinesh along with his wife is focusing entirely on philanthropy and recently funded a new Cancer centre in Mysore.

8. S. D. Shibulal
Net worth is estimated to be 1.1 billion USD.
He is one of the seven Co-founders of Infosys and he resigned from the position of CEO and MD in 2014. Following his stepping down as the company’s CEO, Shibulal along with Kris Gopalkrishnan, started a private limited company to support early stage entrepreneurs. He also oversees his family office, Innovations Investment Management and heads “The Tamara”, a boutique resort chain partnering with his daughter. 1.1 billion USD worth billionaire is progressing with building resorts in south India and working on hotel acquisitions in Germany. Shibulal owns two family foundations along with his wife and has donated 11 million USD to support various causes.

The list of Tech Billionaires has New Young Entrants who have attained remarkable success. Divyank and Bhavin Turakhia (brothers), founder of an internet domain- Directi, sold their six year old advertising technology firm Media.net to an association of Chinese investors worth 900 million dollars in August 2016. They have marked their international presence with offices in New York, Los Angeles, Beijing, Zurich and Dubai.  Bhavish Aggarwal and Ankit Bhati, another young duo owns an online car rental services in India called Ola are estimated to be worth 0.3 billion USD each. Channelizing their success further, they have also come up with Ola auto-rickshaw service. Vijay Shekhar Sharma, the founder of mobile wallet and e-commerce website Paytm, which had started as an online place for bill payments and mobile recharge and later emerged as a marketplace for all utilities to the customers. Sharma’s net worth has risen from 0.5 billion USD to 1.1 billion USD as per techfactslive.com. Sanjeev Bikhchandani, is a founder and executive vice chairman of Naukri.com, a highly successful job portal in India. He has won the Ernst and Young- Entrepreneur of the Year award in 2008 and has an estimated net worth of 0.5 billion USD.

There is a high possibility of witnessing increased number of Tech billionaires in times to come, powered entirely by developments in technology.