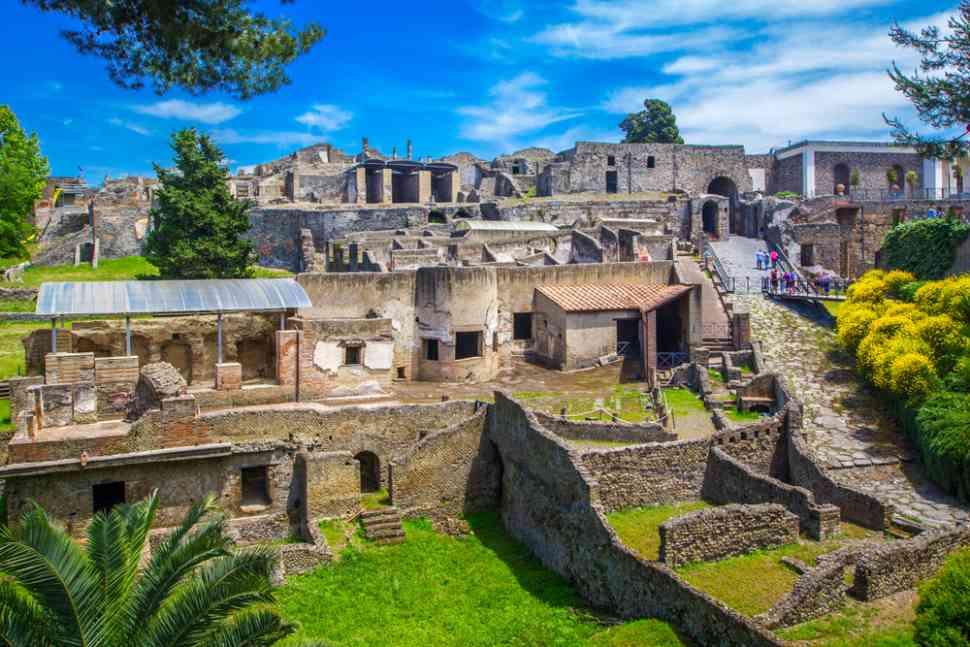 Pompeii was a city in southern Italy, on the side of the Tyrrhenian Sea, near Naples. The Greeks built Pompei on the coast of Campania. It was located at the foot of Vesuvius and had a population of 20,000-30,000 residents. It was conquered by the Romans and was much influenced by Greek and Roman culture. Due to its location and climate, it was the best resort in Rome. Many wealthy Romans had built on its vine-covered hills beautiful country villas, which they adorned with various works of art.
In 62 AC, there was a great earthquake, which shook this fine and rich city. This earthquake was the portent of the later-on total destruction of the place. Indeed, a few years later, on August 24, at 79 AC, after a terrible eruption of Vesuvius, a huge wave of ashes buried everything in a few hours. Until the eruption in 79, people considered Vesuvius a mere mountain. Strabo says it was a mere beautiful mountain, covered with fine fields, except the top of it, which was flat and black. Therefore they had concluded that the mountain had once taken fire and burned, but the fire was extinguished because it lacked the combustible material. Before the eruption, Vesuvius brought a lot of money to Pompeii because of the fertile soil around it. But, although its territory looked like paradise, in fact, it was an active volcano. The townspeople did not know that at the time. That morning the eruption of the volcano was so strong that gases and fragments were released from the crater, hiding the sun for about two days. At the beginning of the explosion, a loud rumble was heard, and a loud earthquake occurred. Immediately, a terrible cloud of ashes arose, which covered the city to a height of one meter. As soon as the inhabitants of Pompeii realized the disaster, they began to flee, taking everything they could to catch up with those shocking moments. Many, however, changed their minds and came back. Paralysis and panic followed. After the cloud of ashes, an unimaginable storm of volcanic eruptions flooded the city. This covered it at the height of 3 meters, and on them, a new layer of ashes and stones was superimposed so that the current backfill reaches 6-7 meters.
It is estimated that more than 2,000 people were buried alive and thus died of suffocation. The first discovery of part of Pompeii was made in 1592, by chance, during the work on the construction of the underground aqueduct of the town of Torre Annunziata located nearby. At that time, many important objects were found, which, together with what they discovered in subsequent excavations, are today a real treasure of art. The excavations brought Pompeii alive to our eyes, revealing many details of the everyday life of its inhabitants. Protected from the time where all the rich mansions, with their numerous frescoes, the marketplace, the numerous temples, the Little and Grand Theatre, The Arches, the fountains, the shops, and the private houses. Details that show us the sudden death of the city from everyday life abruptly interrupted are visible. People who died while eating, people who drowned in the fumes trying to escape the horrible death.
Some were trapped in buildings, while others were killed as they sought shelter for their families. But all of them were buried under one ash. All the skeletons were left intact, “trapped” in the posture they had when they died. The urban and architectural identity of the city was also reflected intact, thus offering scientists some of the most important findings of the Roman period. One question that arises, however, is what happened to those who managed to survive one of the greatest tragedies in history? The survivors of the natural disaster seemed to move to nearby places. They remained along the southern coast of Italy and specifically settled in areas such as Naples, Ostia, and Pochuoli.
Incomparably great is the value of the ruins of Pompeii, as they gave us an idea of a Roman city as a whole. These discoveries drew worldwide interest. Poets, prose writers, artists, and in general, the whole intellectual world turned to Pompeii, and this is how we know about it today.