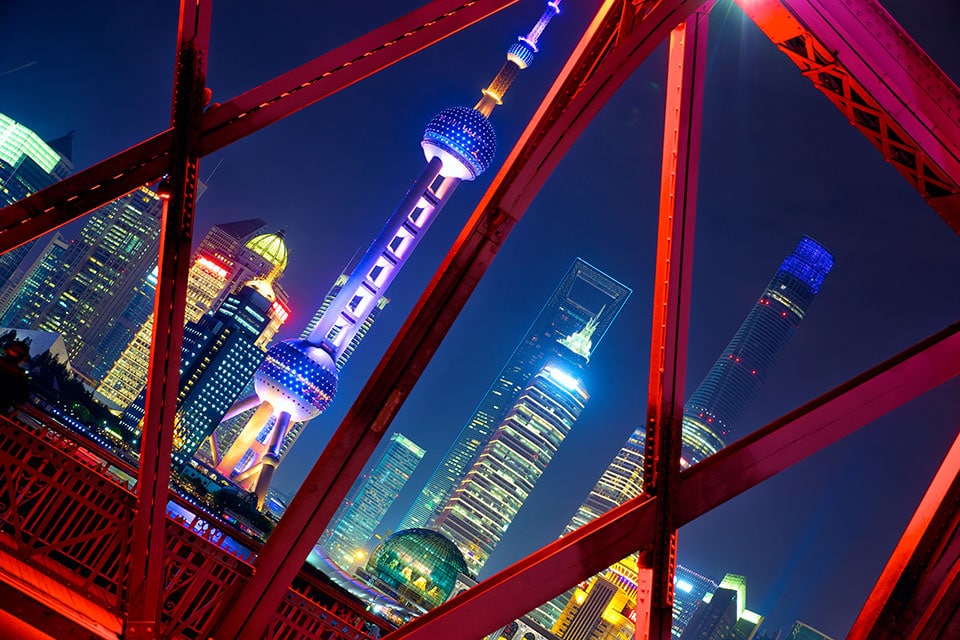 Soon, it will be Chinese New Year, and as always, many hope for a prosperous year- though it looks more like another year of hard work for China in order to move on, also at the political top-level.

On the 25th January, which is just a few days away, is the celebration of Chinese New Year, where a troubled year for the Chinese economy and leadership officially comes to an end. The zodiac that the coming year belongs to is the Rat, or more precisely, the Metal Rat, and a lot of good things are said about the Rat in the Chinese zodiac system.

It may sound like a relief for the Chinese economy, but if one uses the traditional Chinese calendar and zodiac in forecasting the economic outlook and stock markets for the coming year, then not everything looks so rosy. The tradition says that various elements create a big impact on the economy, and Water is currently the dominating element, which indicates weak growth and a bearish stock market. The crystal ball that I use as base for my own forecast is our conviction model for China, but neither does this model necessarily predict a new upbeat view when entering the new year.

The past week, however, represented at least a partial solution in the US-China trade war, as Chinese chief negotiator Liu He visited Washington D.C. to sign the so-called “phase one” agreement. In the agreement, the US will stop further raising of its tariffs towards China, but in return, China must buy additional $ 200 billion worth of goods in the United States over the next two years.

To take further air out of the controversies, the United States at the same time announced that it no longer considers China to be a “currency manipulator”. This predicate was awarded to China as late as last August, which was at the same time when the trade war between the two economic superpowers flared up again. I value the current development as positive, as there is no doubt that the new Chinese year starts with a more conciliatory situation between the US and China, and where the two parties have found a platform to find solutions on outstanding disagreements.

In 2019, the economic development in China was particularly affected by the trade war, whereas growth in 2018 wasn’t affected in the same way. The sales of cars reflect a part of this pattern, though last year luckily finished with some optimism (graphic 1). Back in 2018, car sales began a decreasing trend in China, but I do not believe that this was a close connection to the trade war with US. The decline was more closely related to a general slowdown in consumption, but the growing storm from the US trade war obviously reinforced all negative developments in the economy. The decline in car sales continued into 2019, with the annual decline reaching 17.5 pct. at the beginning of last year. It should be mentioned that many statistics include smaller vehicles for commercial use, but the statistics to which I refer to exclusively include passenger cars. 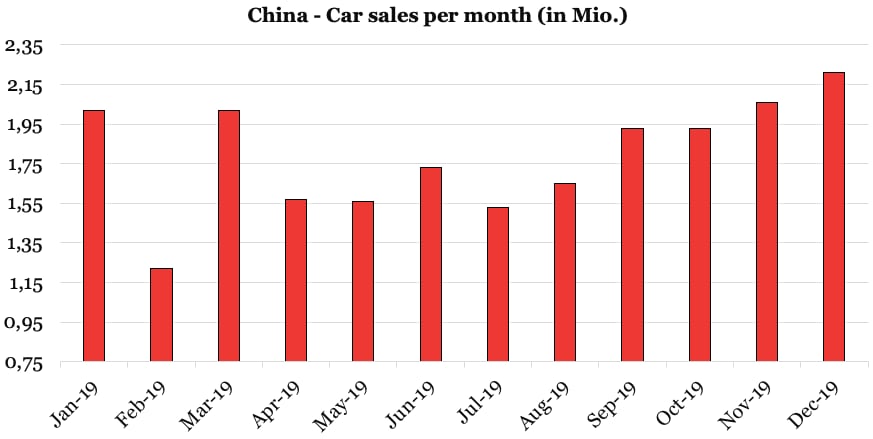 The sharp downturn a year ago clearly had a connection with the trade war, as consumers simply feared for their job security. Amplifying the decline in sales of new cars is the increasing tendency to buy a used car in China. In addition, a subsidy for electric cars in China has been removed, so electric-driven cars become less attractive to acquire. Thus, it is not only the trade war with the United States that pressured car sales down, and it is even more interesting that car sales gained so much momentum in late 2019, that the annual change ended at just minus 0.9 pct.

That is not even status quo, which in absolute terms is less impressive, but it is a significantly improved momentum that is brought into this new year, compared to 12 months ago. The latest numbers for China’s exports also confirm improved developments in November and December (graphic 2). In December, the export increased with 9.1 pct. compared to 2018, but a part of the increase can be explained, as so-called statistical base effects, which do not represent a real increase in the export of goods or services. However, there is also a real progress hidden in the data, just more modest than the headline numbers.

Just as with the trade war, the situation for China’s economy has improved compared to the start of 2019, but conversely, nothing really bubbly. However, one should not neglect that in 12 months, China’s economy is about 6 pct. larger than today. It emphasizes that China is always offering a wealth of opportunities for investors and companies, but more humble work is needed to find the successes.

The same will be the key for the leadership in China, where the United States may have been welcoming this week by signing the “Phase one” trade agreement, but vice versa, US has also formed an alliance with the EU and Japan in the World Trade Organization (WTO) against China’s state aid to the country’s corporations.

I see it as an affirmation that even at the political top-level in China, they also have to take another turn with pretty tough work. This applies to both creating more trade negotiations with the United States, and to stimulating the domestic economy, where I argue that a tax reform is needed to create further movement in private consumption. In my assessment of the economic outlook of the Chinese economy, I also include that this year is the last year in the current five-year plan. 2021 will also be the tenth-year anniversary of prior President Hu Jinto’s goal; that by 2021, China’s GDP should have doubled compared to the total GDP in 2012. I consider that the current President Xi does not feel 100 pct. obligated by that goal, but interestingly enough, China can achieve the goal if the GDP growth is running at the current level– so the 100 pct. increase in GDP will probably be the result when the Year of the Rat is over.

tweet
share on Facebookshare on Twittershare on Pinterestshare on LinkedInshare on Redditshare on VKontakteshare on Email
Peter LundgreenJanuary 19, 2020