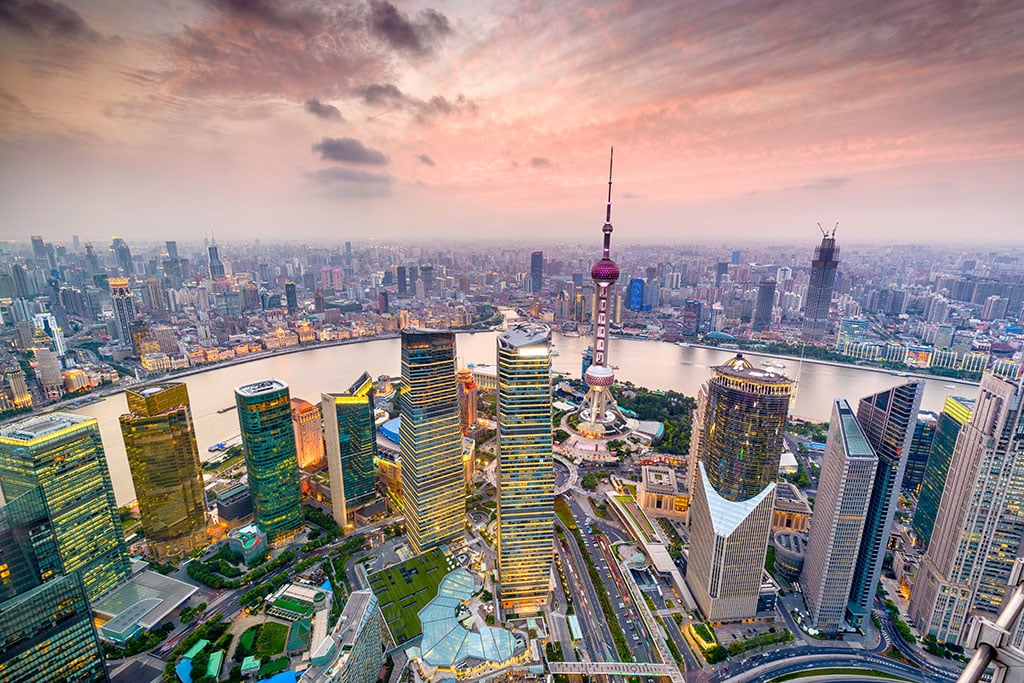 The details of the Chinese GDP growth in the second quarter reveal that private consumption has boosted growth in China, and is the bulwark against Trump’s trade war. The US trade war against China has sent financial markets on roller coaster moves several times during the past 1½ years. Of course, the Chinese stock market has been most exposed to vigorous movements, wherein China’s economic development, at the same time, has been in particular focus.

Special attention remains on how hard the trade war with the US affects China’s economy, though seen from a broad perspective, the damage is modest, so far. One of the reasons is that China’s economy is constantly moving and changing, which is quite fascinating.

The second quarter GDP growth was 6.2 pct. (graphic one) i.e. the figure lived-up to expectations. In many headlines, it was described as the lowest growth since 1992, and that story will continue for some quarters, as the growth rate is still on the decline. 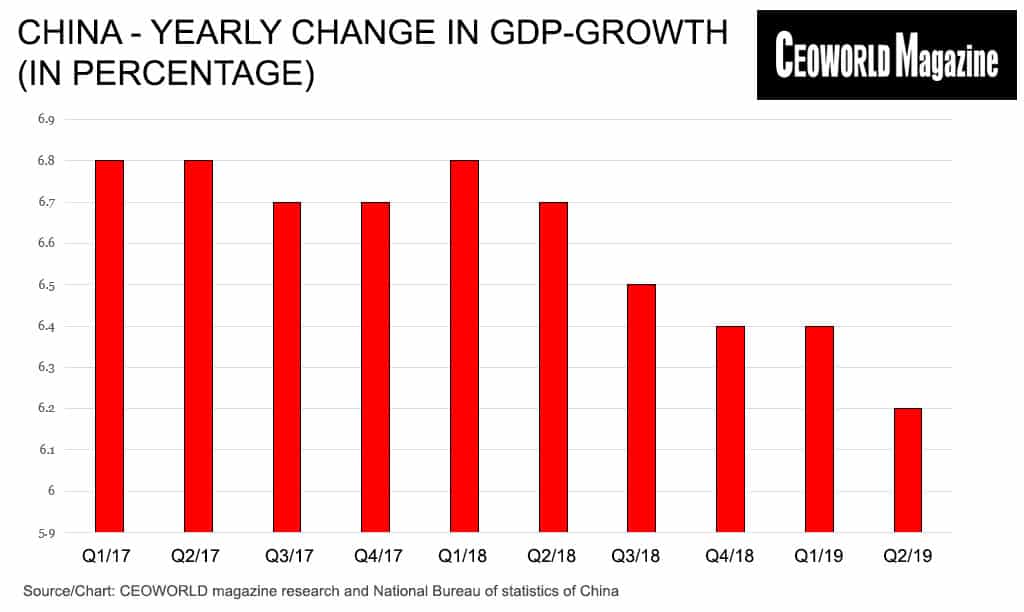 My view remains that the GDP growth in China will drop to six pct. faster than the financial markets expect, but it will no longer be a shock to anyone.

The main reason behind the decline in growth rates is simply mathematical. China’s economy is growing, measured in absolute numbers, but it gets more difficult to maintain the same high growth rates as it simply requires a different growth level. The interesting part is how the growth is composed and what it contains.

Trump’s trade war has left its mark, especially in June, when China’s total exports fell compared to the same period last year. But overall, and throughout the first half of this year, China has seen a decline in exports to the US.

Another business that contributed less to growth in the second quarter was the construction sector, though one has to remember the government initiatives that have been taken to cool down the real estate market.

Nevertheless, it always causes worry when the reverse in the market comes, which is quite natural.

A downturn in the construction sector also has a derivative effect on the service sector. In particular, large properties generate a need for a various number of services related to the operation of the property.

However, the economic data for the second quarter also included several very important and positive developments. As graphic two shows, consumers spent money, and overall retail sales and private consumption contributed further to growth in the first half of 2019 compared to previous years. 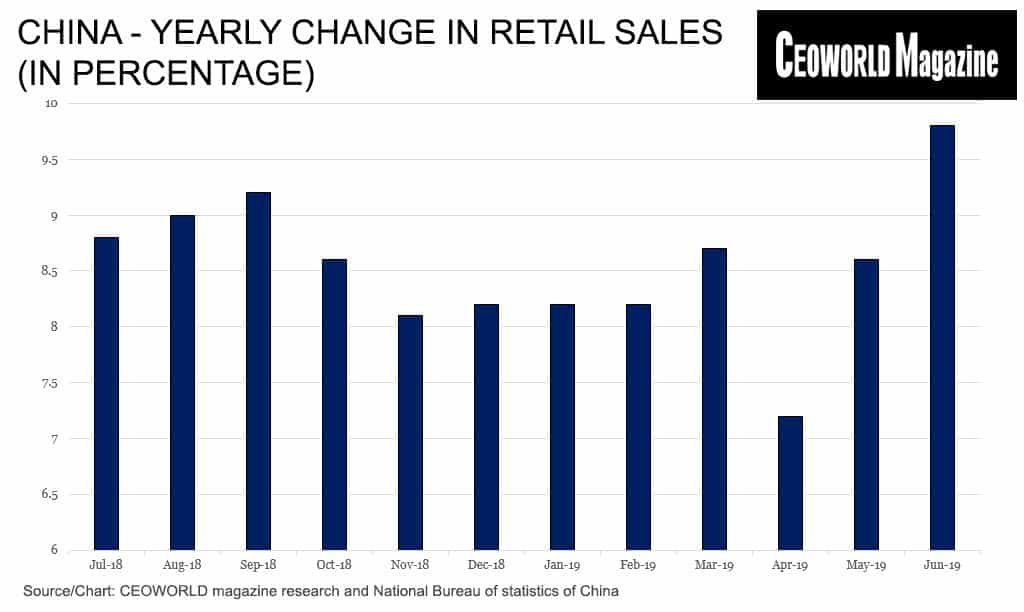 In order to counteract the negative economic effects of the trade war, China’s government implemented major tax cuts for households towards the end of 2018, in addition to the tax cuts granted to corporations.

I was actually very curious about whether the Chinese consumer would convert the higher disposable income into consumption. The plan seems to have succeeded better for the government than some economists have expected.

The development contains several good news, where it is quite positive that a tax reform which gives a higher disposable income had the desired macroeconomic effect. Particularly because the Chinese households are known for their ability to save, but this time, they leaned towards consumption.

Moreover, it is extremely affirmative that the domestic economy has been able to compensate for the negative effects of the trade war, so far. In my view, this reinforces the development of China as a single market and economic zone with increasing domestic focus, and where growth is generated domestically.

Naturally China’s future growth will also be a function of the global economic growth. But many have realised that China’s dependence on exports is rapidly decreasing, which largely has to be compensated for by domestic growth.

I argue that the GDP growth figures, as well as other data, from the first half of 2019 confirm that this change in the economy is still on track. In my view, this is quite good, given the global turbulence that is after all, surrounding China.

Compared with the two other dominant economic zones in the world, Europe and the United States, this is a further reason why I claim that the Chinese economy is showing better resilience and flexibility in order to maintain economic growth.

I see no reason to change my assessment of Europe, which is moving towards even lower growth in the coming years.

Though I have never shared the prediction of a coming recession in the US, and I still don’t. But I note that the US central bank is again considering giving the American economy monetary emergency relief.

In that comparison, it is my view that China is dealing with its challenges in a fairly satisfactory manner, though the country has its problems as well.

The extreme high corporate debt is a distinct Chinese problem and the biggest drag on future growth. I find it hard to believe that a debt reduction wouldn’t hamper investments in the corporate sector, which again hinders economic growth.

Nor do I believe that one should underestimate the risks linked to the trade war with US President Trump. Since the introduction of the increased tariffs, my main scenario has been that some sort of agreement will be reached, though not a sustainable peace that will last for a long period.

But in just a few months, there is only one year until the next US presidential election. It means that President Trump’s decisions will follow election tactics, thus, everything can happen. A further increase in US tariffs on Chinese goods will burden China’s economic growth. Such a move will not only hit China, but the “Kingdom in the Middle” surely will feel the toughest headwind.

Interestingly, another “trade wind” from the United States will probably also affect China. It is the expected US interest rate cut where my best bet is that China’s central bank will follow the American move. Since lending and credit play a major role in China’s growth, I expect a lower interest rate to have a bigger positive effect in China than in the US.

# 6 Things You Might Not Know About Japan’s Shinkansen.
# These are the countries with the largest number of immigrants.
# Interview With Robert Strzelecki CEO Of TenderHut Group.
# 5 Ways to Build a Winning Team: It’s not easy by Laura Freebairn-Smith.

tweet
share on Facebookshare on Twittershare on Pinterestshare on LinkedInshare on Redditshare on VKontakteshare on Email
Peter LundgreenJuly 29, 2019