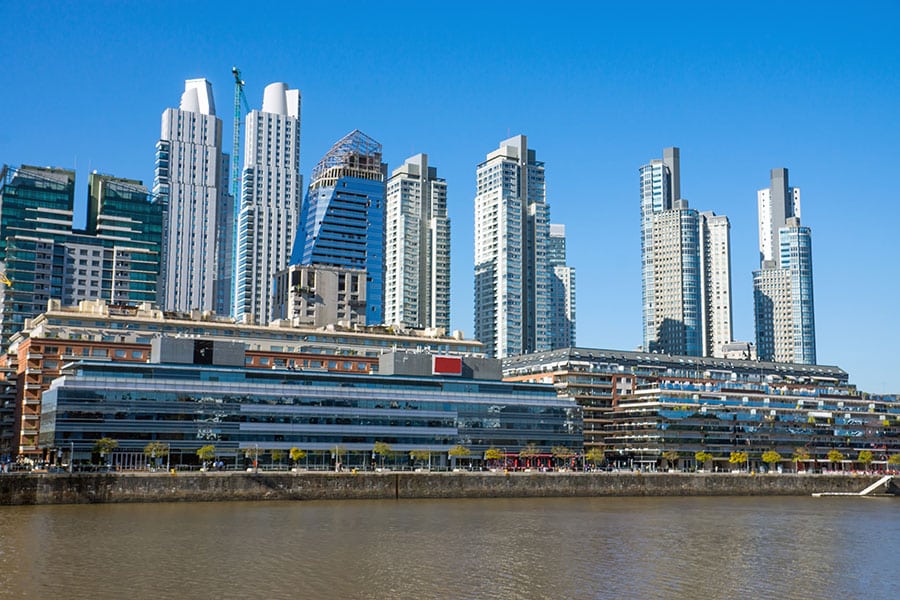 Extending from the frosty ice sheets of Chile right to Cartagena’s Caribbean coast, South America is a goliath continent. The diverse nations in this beautiful continent are brimming with cities waiting to be discovered by the masses. Some are colonial, while others are cosmopolitan; some are staggering, while some have an increasingly raffish appeal to them.

With such a large number of cities to choose from, it very well may be somewhat overwhelming to decide where to visit. We’ve trimmed it down for you to the best 5 cities in South America to travel to and what they bring to the table.

Buenos Aires, the capital of Argentina has been recognized as the best city for business travel in South America 2019, according to a survey by the CEOWORLD magazine, while Brazil’s Rio de Janeiro and Sao Paulo placed second and third, respectively.

The data come from an annual survey of 74,000 business travelers and 22,000 expert business travel managers in 42 countries commissioned by the CEOWORLD magazine. The study was conducted over three months from January 20 – April 19, 2019.

The 2019 rankings placed Cartagena in Colombia in fourth ahead of Ecuador’s capital Quito into fifth; while Chile’s capital city Santiago ranked sixth, and Bogota in Colombia seventh.

Overall, among the top 10 best cities for business travel in South America, 2019, the eighth, ninth, and tenth positions are held by Lima in Peru, Caracas in Venezuela, and La Paz in Bolivia. 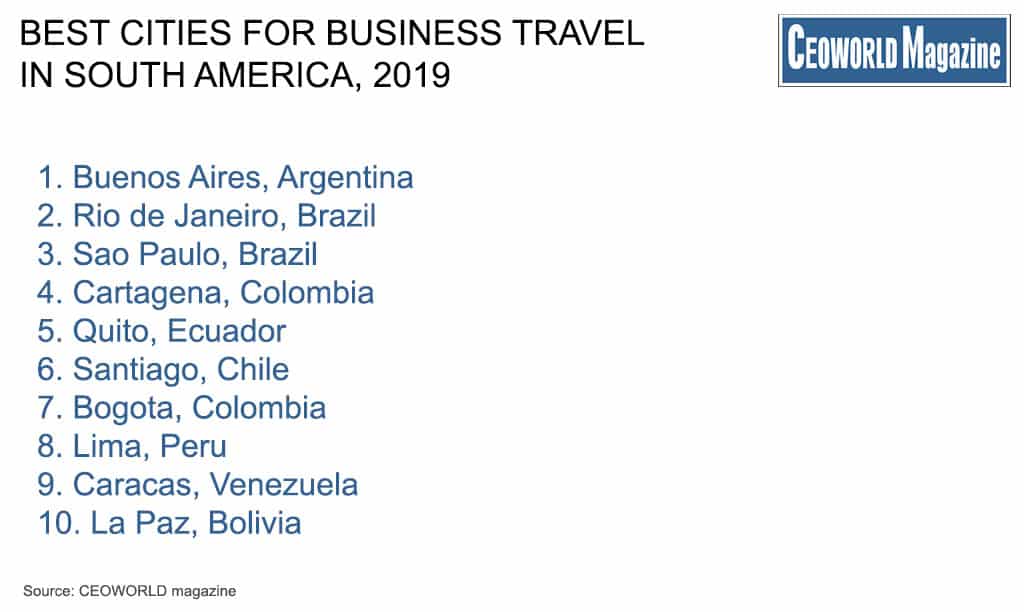 The biggest city in Brazil, São Paulo will take you by surprise. It might take you a few days to get your head around the world’s third biggest city. For São Paulo, you need to make some space in your schedule because you’re going to want to stay here for at least a week.

São Paulo is a sophisticated city with a blend of a lot of cultures. With influences from Germany, Japan, Italy, Lebanon, and an increasing number of Peruvians and Bolivians, the city has an interesting combination of culture. This fabulous accumulation of cultures makes for an incredible list of restaurants where you can try basically anything from around the world.

Buenos Aires, Argentina
Buenos Aires is exhilarating. This cosmopolitan capital throbs with an unbelievable vitality and energy. Also, when the sun goes down, things truly heat up at the milongas (tango lobbies) and boliches (dance clubs). Similarly compelling as the late-night boogie sessions are the flawless wonders of architecture—from Belle Epoque tourist spots like Casa Rosada and Teatro Colón to the Kavanagh Building, a tall Art Deco skyscraper, to the colourful exteriors of Caminito in La Boca—a visual narrating of the city’s rich history.

Rio de Janeiro, Brazil
One of the most sought out places in South America is Rio de Janeiro – a spot that truly touches hearts. This city is brimming with everything you could possibly ask for- delightful shorelines, great mountains, open markets, and foot tapping beats of the samba. It’s also famous for its 98-foot-tall Christ the Redeemer, the biggest Art Deco statue on the planet, and CarnQaval, a yearly celebration of drinks, food, music, dance, and sheer joy.

While a great many people like the city because it offers pleasant shorelines and absolutely insane parties, however, Rio offers hidden benefits too! You’ll get the opportunity to appreciate an intriguing blend of African-European culture and top-class mountaineering. Rio flaunts the world’s biggest urban forest. The city has many trails too, so we definitely recommend going up to the mountains and getting a view of the city from above!

Quito, Ecuador
Quito has been named by a few as the most beautiful city of South America. While this is a title with some hot competition within this list itself, Quito’s dazzling setting is unquestionable. This city is found in a valley in the middle of 2 active volcanoes, blessing the city with a heavenly view. For the best views in this hilly city, just hop in the TelefériQo, the famous gondola lift. Beginning at 2,950m height, the gondola takes you up another 1,000m for sensational views from the highest point of Pichincha Volcano. The world’s absolute first UNESCO World Heritage city, the status granted in 1978, Quito was established on the remnants of an Inca city, in the sixteenth century.

We hope to have helped you shortlist the best cities to travel to in South America. The appropriate blend of beauty and food with an unmatched lifestyle, South America is a trip worth a thousand words. The fabulous monuments, forests, lakes, mountains, coastal areas with kind, friendly and helpful people will make you tempt to visit this place over and over again. So pack your bags and let the wanderlust in you do the talking!

tweet
share on Facebookshare on Twittershare on Pinterestshare on LinkedInshare on Redditshare on VKontakteshare on Email
Anna PapadopoulosJune 3, 2019