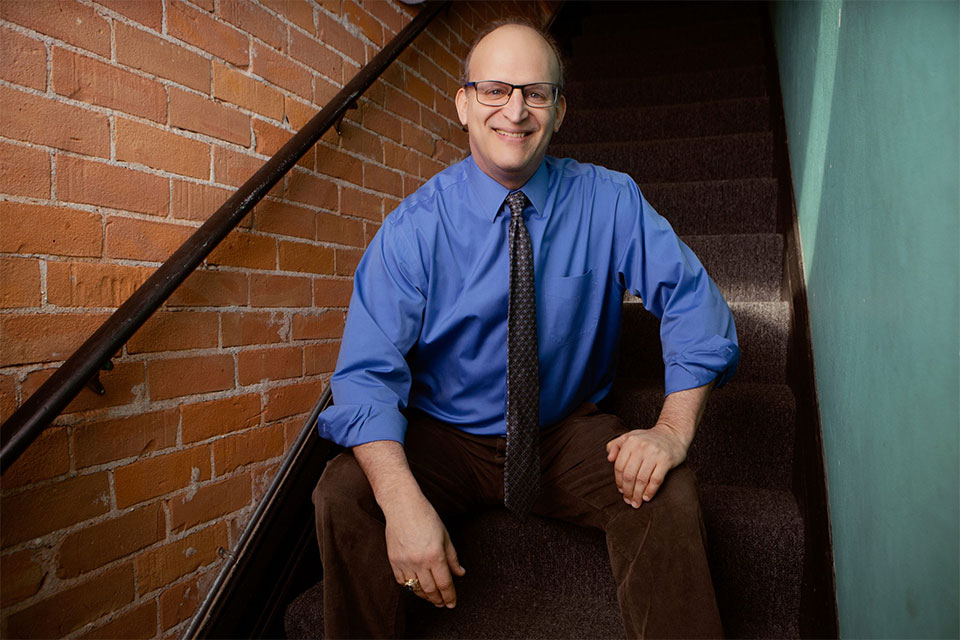 Transforming organizations takes years, is hard work, and often leads to disappointing results.  This is common wisdom.  It’s been proven time and again.  It goes with the territory.

But it doesn’t have to be that way.

Most approaches to organization transformation are littered with flawed paradigms.  Paradigms that inherently lead to these efforts falling short of the mark.  Want different results?  See the world in new ways.

Uncommon wisdom makes it possible to achieve faster, easier, better results with any transformation effort, in any organization, made by anyone.  The approach I am describing is chockfull of new paradigms, fresh perspectives on problems that have plagued organizations for years.

Welcome to the world of Leverage Change.

Leverage Change: Leverage Change is a flexible approach to applying eight ways for individuals, teams and organizations to transform faster, easier, and better than you believe possible.  You can use it to turbocharge a change method you’re already using or as the foundation for one you’re developing.  It applies equally well to simple efforts involving a few people to complex ones engaging tens of thousands.  Benefit from it as you launch a transformation effort and reap rewards if your work is already underway.  Be the “go to” person when it comes to change, advancing your career and organization alike.

Adopt the paradigm of leverage and accomplish more with fewer hassles, headaches and problems.  Archimedes, a third century B.C. Greek mathematician described the power of leverage when he said, “Give me a lever long enough, and a fulcrum on which to place it, and single-handed I shall move the world.”  You can move your worlds in the arena of transformation by changing your paradigms about how it happens.  Leverage Change is your guide map along this journey.

Leverage Change is comprised of eight levers, or smart, strategic actions, that yield profound results.  Each addresses a common problem that prevents transformation efforts from succeeding (see Table 1.)  While there are eight powerful ways available in creating effective transformations, I am going to focus on one that addresses a frequent frustration of leaders:  change taking too long.

Organizations pay a steep price for slow transformation efforts, even when they can eventually claim victory from their work.  While you are toiling away, competition is winning new markets, commercializing leading-edge technologies, making valuable process improvements, and creating cultures that lead to advantages in recruitment and retention of top talent. 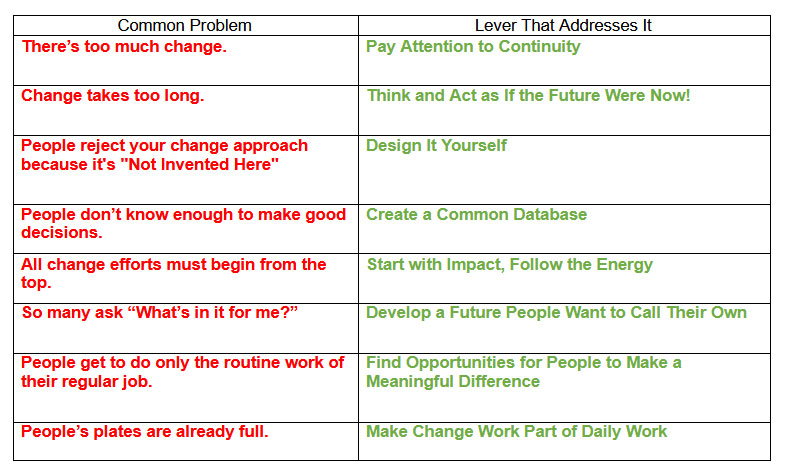 Living in a Leverage Change World

How can you reduce the time it takes to transform an organization from years to months?  Embrace a new paradigm, the lever noted above of Thinking and Acting as if the Future Were Now!  Instead of seeing the future as something “out there” that will occur at a later point in time, choose to live it today.  Here.  Now.  When you and your entire organization make this shift, transformation occurs rapidly, even in some cases instantaneously.

Your old paradigm told you that transforming culture takes years.  Plenty of experts will tell you the same.  Don’t buy it.  Your new culture will take years to create because you believe it will.  If you want a more participative culture, think and act as if this close collaboration already exists.  This paradigm shift immediately changes the game.  In this new reality, who should be in the room for the meeting you’re in now?  What criteria should you be using to make decisions today?  How much power should different stakeholders hold in this moment?  Stop talking about the future.  Start living it.

Then encourage others to join you in this journey.  Create an organization that subscribes to this new paradigm.  Benefits of effective change work accrue to the bold.  Colleagues previously reticent to jump aboard the transformation train see and hear change occurring all around them.  Their belief that this time it’s for real increases significantly.  As they begin thinking and acting as if the future were now, their colleagues’ faith in the future being real creates a virtuous cycle of ongoing transformation.  At the same time, you’ll be collecting financial, quality, customer satisfaction and other “winnings” sooner…and being able to reinvest them, further stoking the engine of your transformation efforts.

You have a new strategy implementing end-to-end improvements in all your core processes.  It’s smart, innovative and sure to give you a leg up on the competition…if you implement it before they make their next competitive move.  But how do you get that job done well?  And done now?

3 Steps to Jump Starting the Transformation of Your Organization

How does the lever Think and Act as if the Future Were Now! accelerate implementation of your new strategy?  I outline how to do this, providing answers to the above implementation effort as examples.  Pick your own transformation work – for yourself, your team or your organization – and respond to each of the steps for your own benefit.

Step 1:  Describe the essential elements of the preferred future you aspire to create.

Step 2:  If you were already living in this preferred future, how would you be thinking and what actions would you be taking right now?

Step 3:  Invite others to join you in Thinking and Acting as if the Future Were Now!

Introduce this new paradigm to the rest of the Executive Committee at our next meeting and list all the ways we can begin “living the future today” – both individually and collectively – immediately.

This article was adapted from the book Leverage Change:  8 Ways to Achieve Faster, Easier, Better Results by Jake Jacobs.

tweet
share on Facebookshare on Twittershare on Pinterestshare on LinkedInshare on Redditshare on VKontakteshare on Email
Jake JacobsAugust 14, 2021

Jake Jacobs is an award-winning author, consultant and founder of Jake Jacobs Consulting, a global consulting firm that enables you to achieve results from change work faster, easier and better than you imagined possible. Over the past 35 years Jake has worked in 61 industries, from high tech to manufacturing to hospitality to entertainment to financial services. During that time, he’s consulted to 96 organizations, from Fortune 50 companies to New York City, national non-profits and the U.S. Army and Navy.

Other Books by Jake Jacobs: Leverage Change: 8 Ways to Achieve Faster, Easier, Better Results; You Don’t Have to Do It Alone; and Real Time Strategic Change.

Jake Jacobs is an opinion columnist for the CEOWORLD magazine. You can follow him on LinkedIn.
view all posts