CEOWORLD magazine - Top Stories - Business Luxury Lifestyle - Living Like Royalty: The Five Best and Most Luxurious European Castles For Your Next Holiday 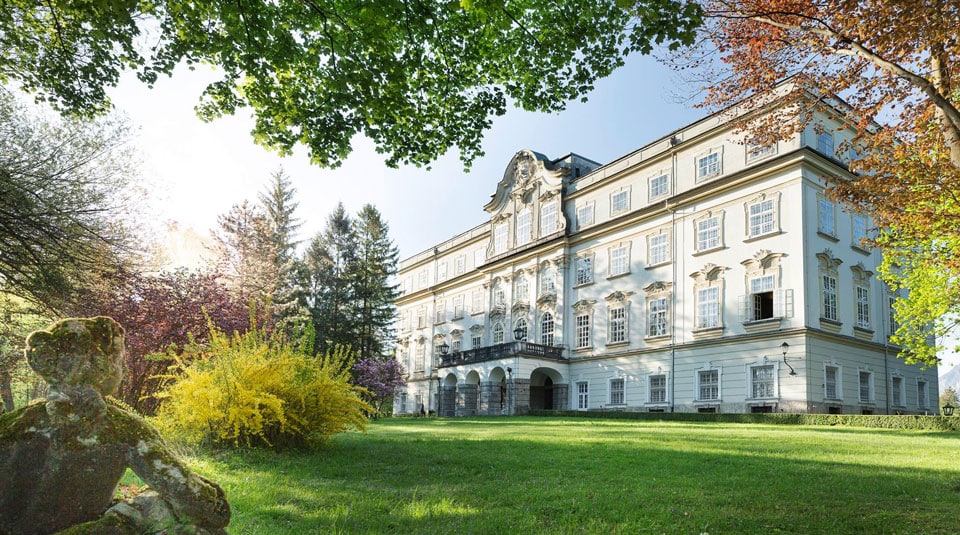 For the handful of travelers that can afford the finer experiences in life, musty old lodging, with outdated amenities and poor service is the last thing they’re looking to encounter when traveling in and around Europe.

Modern travelers that are willing to dish out a pretty penny for gourmet living and luxury accommodation are constantly looking for something unique and different, without compromising on quality.

With travel and leisure making a full rebound after more than two years of lockdowns and restrictions due to the global health crisis, hotels and guesthouses have found themselves pent up with soaring consumer demand, against the backdrop of rising prices due to higher inflation and soaring operational costs.

Middle-class travelers are perhaps most vulnerable to recent price hikes. In Britain, the average daily rate for a hotel room in May 2022 was up by 12% compared to the same period in 2019. In Ireland, where international travel has made a dramatic return, hotel prices are up by as much as 21.4%.

Other top travel destinations including Portugal, Spain, and Italy have seen the highest increase in accommodation prices since 2019, with prices climbing 15%, 17%, and 23%, respectively.

Luxury accommodations and residences have also fallen victim to higher rates over the summer.

An article published by Bloomberg back in September showed that Le Bristol, one of Paris’s most expensive hotels, hiked their nightly rates by as much as 20%. Prices for an entry-level room went up by €300 to €2,290, with the top Imperial Suite costing close to €30,000 per night by the end of August.

The sudden hike in prices comes as American tourists, with their strong dollars, have returned en masse to popular destinations such as Paris.

With demand steady, hotel and lodging prices are set for yet another hike in the coming year, as experts suggest that consumers will continue paying top dollar for cultural experiences even as inflation eats into their disposable income.

With the summer travel chaos now starting to fizzle out, the upcoming holiday season could see an uptick in foreign and international travel now that nearly every country has scrapped pandemic-related restrictions and quarantine protocols.

“For high-end travelers, busy hotels and crowded cities are all but last on their list of experiences when planning their upcoming holiday.Soaring demand and sudden price increases for entry-level rooms in popular cities have meant that some travelers are looking to book their accommodation in more unconventional places, where they can indulge in fine dining and gourmet living without the hustle and bustle of tourists,” says David Stewart, CEO of Guide To Europe, an online travel and bookings aggregator.

The splendor of the many castles in all the top cities in Europe offers more than an exclusive stay, but rather encapsulates an atmosphere of opulence, rarity, and extravagance.

From dining extraordinaire, a selection of private wellness retreats and exercise programs, to exotic treatments and never-ending complementary Dom Pérignon – these are the five best castles in Europe to consider for your next holiday.

Located roughly two kilometers from the center of Old Town Salzburg, Schloss Leopoldskron is an 18th-century hotel, situated next to a small lake, manicured gardens, and neighbors an 11th-century fortress.

The hotel boasts a selection of modern and traditional amenities, and guests have access to the Leopoldskron Palace, the Max Reinhardt Library, and a chapel, most of which are not accessible to the general public. 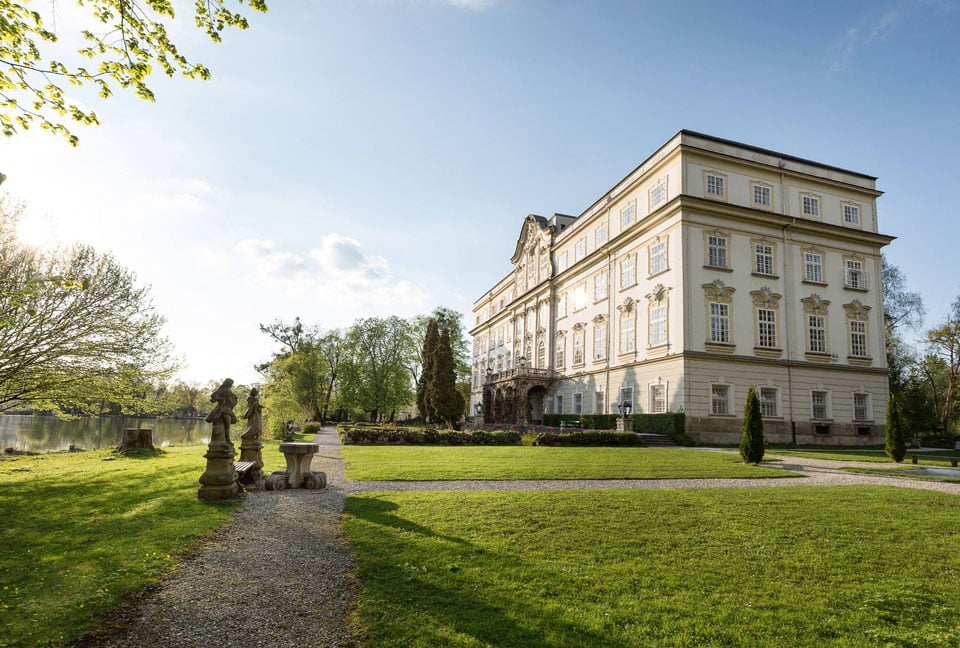 The sprawling grounds have a mix of fauna and flora native to the region, overlooking a small lake that creates a picturesque setting. In total there are 55 rooms in the Meierhof Hotel, and 12 suites in the Palace. The majority of the hotel and the grounds are not accessible from the public, which allows high-paying guests and a more private and enclosed experience.

The 300-year-old Baroque-style Schloss Bensberg is a five-star palace located near the cities of Cologne and Düsseldorf and is considered one of the finest and most luxurious palace hotels in Northwest Germany.

Each room is crafted to the old and native European Belle Epoque era design and architecture. Aside from its breathtakingly sophisticated interior, the sprawling gardens allow guests the freedom to roam the grounds freely.

The hotel is also home to the Three Michelin Star Vendôme restaurant, considered to be one of Germany’s best dining experiences. 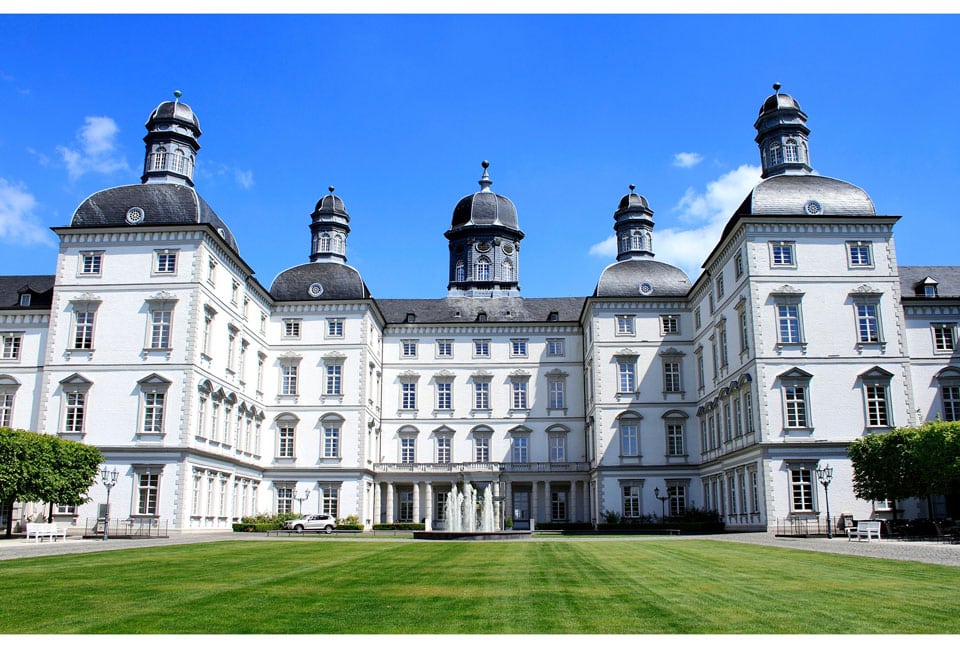 Rooms at the Althoff Grandhotel Schloss Bensberg range from entry-level deluxe suites that feature contemporary interior architecture and design. More affluent guests will enjoy the 12- sq meter Presidential Suite that has a private sauna, and pool and overlook the Rhine Valley and Cologne Cathedral.

While the Swiss Alps boasts a selection of luxury hotels and resorts, a new contender, the Grand Hotel Kronenhof, located in Pontresina near St. Moritz has in recent years taken the title to become one of Switzerland’s most elegant castle hotels.

The 19th-century neo-Baroque castle is nestled between the foothills of the Bernina glaciers and the Engadine Mountains. The hotel has built quite a reputation for its immaculate service, and some of its amenities include the highly formal Grand Restaurant and the Kronenstübli restaurant. 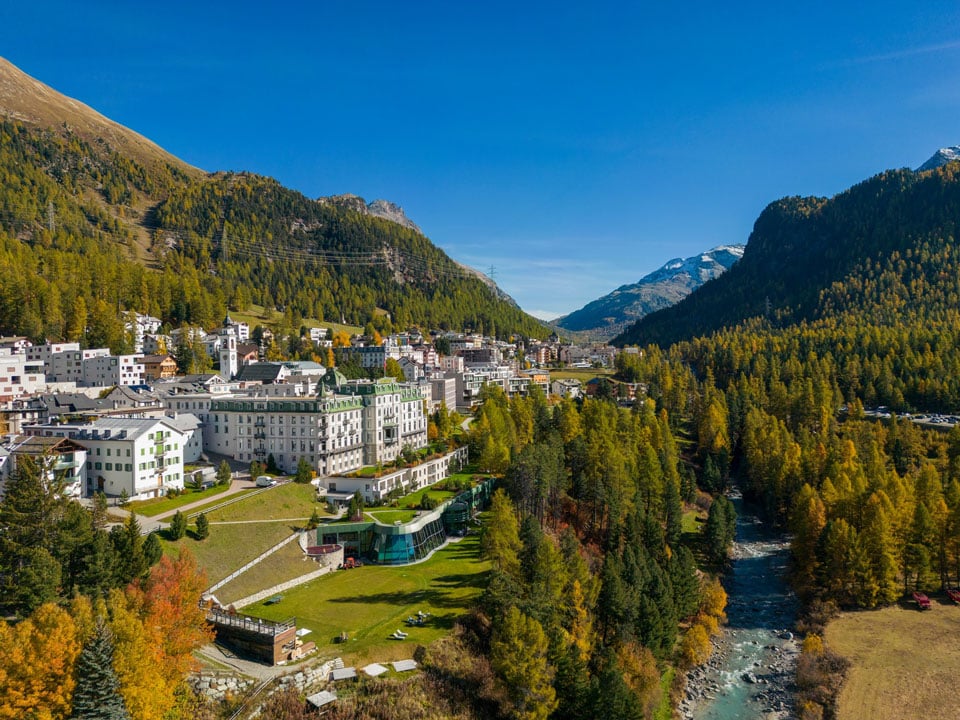 Aside from the award-winning dining experiences, guests will also have access to a spa, pool, wellness bath area, a saltwater grotto, the Kneipp footpath, yoga center, and treatment rooms.

The more than 100 available rooms range from the Grand Premium Junior Suite, a 48- sq meter standard bedroom, to the finer Grand Classics and Grand Premium rooms that offer various amenities, mountain views, and outside space.

A bit more off the beaten track, The Xara Palace in Mdina, Malta is a modern, yet stylish 17th-century palace that is surrounded by Baroque architecture and features 17 luxury rooms and suites.

Each of the rooms has in recent years been restored, and now reflects the contemporary standing of its rich cultural history. Aside from its exterior offerings, the palace has become a beacon of innovation and sustainability, looking to become more environmentally conscious and encouraging guests and other hotels in the area to do the same. 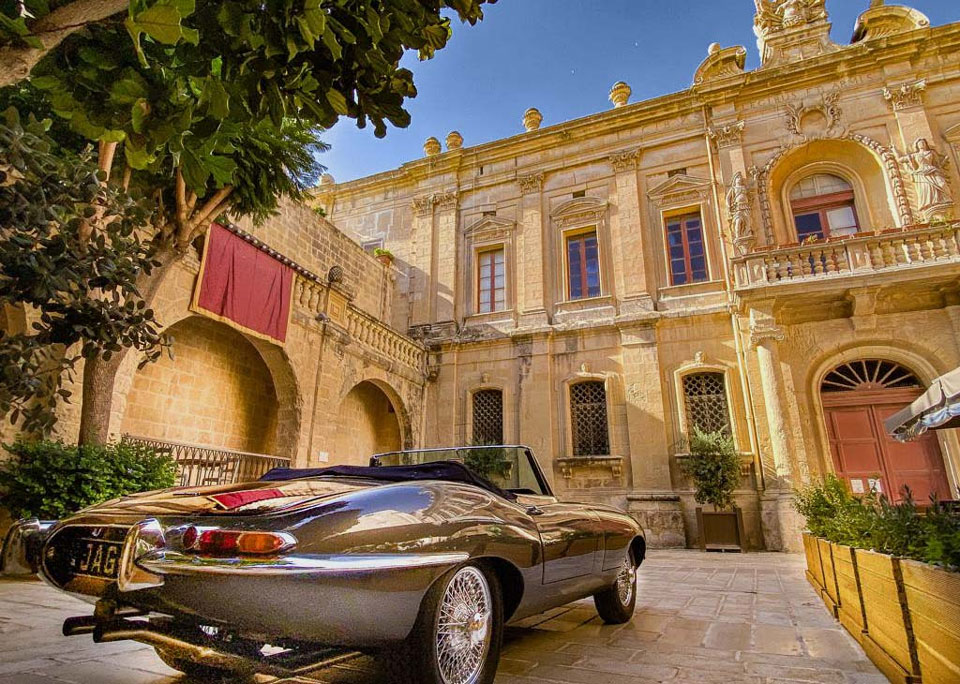 From the kitchen to their hydroponic system, nearly 40% of waste is used to grow quality ingredients that are used in the hotel’s One Michelin Star Restaurant, The de Mondion, which has a largely Mediterranean-inspired menu.

Xara Palace is a forward-thinking hotel that takes pride in its eco-conscious efforts as they look to inspire and drive the local hotel industry towards more environmentally-friendly practices.

Regarded as one of Scotland’s most luxurious and sophisticated hotels, Inverlochy Castle, located at the foothills of Ben Nevis, considered to be the highest peak in the Scottish Highlands is a lochside baronial mansion that has hosted members of the royal family, political dignitaries, and celebrities.

The first royal guest was Queen Victoria, who spent a week at Inverlochy Castle back in 1873. Other royal guests were the former Queen, HM Queen Elizabeth, and HRH The Duke of Edinburgh. Aside from royalty, prominent figures who have also called the castle home include Charlie Chaplin, Sean Connery, Sir Elton John, and Anthony Hopkins.

Not only does the castle have a rich history, but it features one of Scotland’s most award-winning restaurants, led by Chef Albert Roux and his son, Michel Roux Junior. 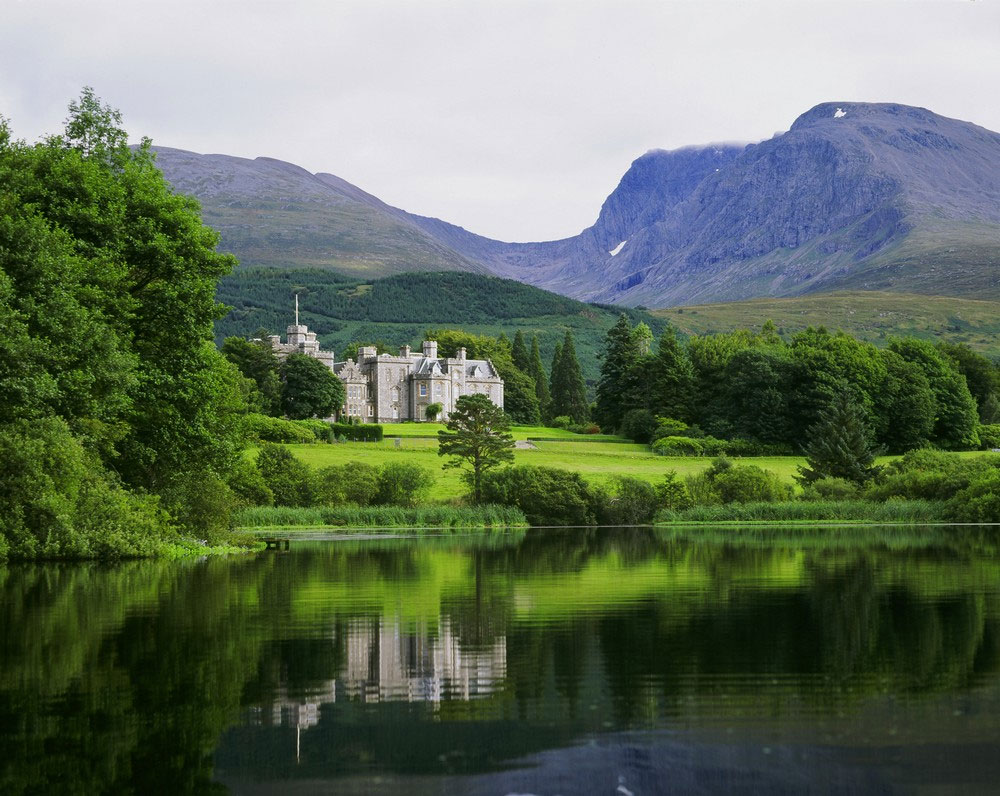 While there is a lot to experience and enjoy at Inverlochy Castle, this is perhaps one of the most culturally profound and sophisticated experiences and travel will enjoy while in the Scottish Highlands.

It pays to be part of the top percent of travelers that can enjoy the finer and more luxurious things in life. From private like-side accommodation to dining among royals and well-known dignitaries, or enjoying award-winning experiences at secluded resorts, luxury living doesn’t get any better than this.

Written by Jacob Wolinsky.
Have you read?
Unproductivity arising from a planning fallacy by Riccardo Pandini.
The Best Time Is Now: Dr. Wendy Borlabi, Performance Coach for the Chicago Bulls, Talks About Writing Her Book by Kim O’Hara.
Why senior roles need to be more flexible too by Belinda Morgan.
We don’t choose our holiday memories, but they choose us by Michalis Kostopoulos.
Nikos Koutsianas, Founder of Symbeeosis/ Founder of Apivita.

CEOWORLD magazine - Top Stories - Business Luxury Lifestyle - Living Like Royalty: The Five Best and Most Luxurious European Castles For Your Next Holiday

Lisa BrownStats Gate
As of November 26, 2022, Guillaume Pousaz was the wealthiest man in Switzerland, with an estimated net worth of 23.0 billion...