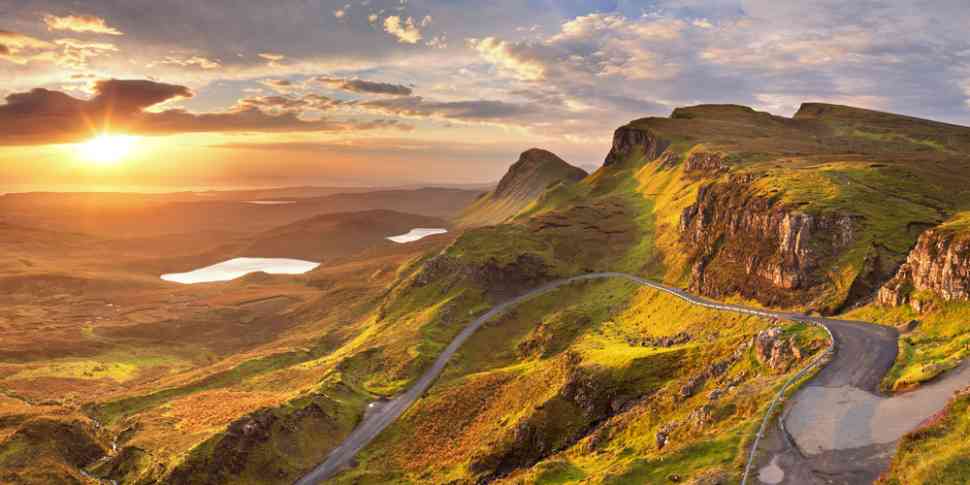 Sunrise over Quiraing in Isle of Skye, Scotland

The Highlands differ from the lowland part of Scotland the so-called Lowlands. which include both the largest cities, Glasgow and Edinburgh. Unlike the Lowlands where we find megacities and a strong sense of urbanization, in the Northern Highlands there are few inhabitants, sparsely populated towns and villages, frequent bad weather and relatively cut off from the culture of today’s areas.
In these places, the inhabitants adhere strongly to the unique elements of their language and often find it difficult to observe it not only the English but even the Scottish Lowlanders themselves. This played a role in the special prehistory of the tribes that dominated the Highlands. The tribes in question were considered savage for many years and are descendants of the Celtic Gaels whose culture dominated and dominates even today too, clearly, to a lesser extent. With the succession of centuries and the waging of wars, as well as the great waves of emigration, we came to the cleansing of the tribes by the English in the 18th century and the thinning of the population. The inhabitants of the highlands of Scotland, also known as the Highlanders, honor their history and thus the Customs and traditions of many centuries are reverently preserved and observed.

The “orgies” of nature
The area of the Highlands is offered to nature lovers everywhere for difficult but enjoyable excursions and hikes. The difficult weather conditions, with frequent alternations of snow, heavy fog, and rain, as well as the lack of airports can make the work of aspiring travelers difficult, but the sight they will face compensates them without any doubt. In the Highlands, Visitors can see lush green meadows, steep cliffs, deep U-shaped valleys, and breathtaking gorges. The most famous of them is the Glen Coe Gorge, which passes through the Coe River and is of volcanic origin. It is surrounded by wild mountains and is an ideal choice for mountaineering. Continuing the tour, the Traveler has the opportunity to admire huge forests with an area of 5000 square miles. Wherever there are forests, there are also wild animals, such as rare species like the white-tailed eagle and the Red Deer. Of course, the total area of the Highlands is home to a wide variety of animals, such as in its marine parts, where whales, otters, and dolphins dominate.
Despite the freedom of natural influence, little human intervention in the region has also helped to upgrade it. There are two National Parks, the Cairngorms, and The Trossachs, in which various animals such as deer and Falcons coexist in natural landscapes consisting of hills, lakes, waterfalls, rivers, and forest paths. Outside the two national parks, there are also 43 nature reserves in the Highlands.

The imposing castles
If anything, the harmony of the Highlands is also due to human activity, always in association with nature. The existence of a large number of scattered castles and fortresses throughout the highlands is spectacular. Eilean Donan and Dunrobin Castle stand out among others. Eilean Donan is regarded as Scotland’s finest and grandest Castle and is built on an islet in Lake Duich. It was built in the 13th century and was a major stronghold in the battles fought in the surrounding areas over the centuries. Although in 1719 it was destroyed after the burning of English ships, it was reconstructed and took its form today in the 20th century.

The capital and the beautiful villages
Inverness is regarded as the informal “capital” of the Scottish Highlands. It is the administrative center of the Highlands and with a population of 46,869, it has 1/4 of the total population. It has a number of cathedrals and cultural monuments that have been preserved since the Middle Ages. In addition, it is the city that enables travelers bound for the Highlands, to settle and choose from a wide variety of hotels and rented rooms with excellent quality accommodation. After Inverness, the most popular destinations are the lovely villages of the area. The most famous of them are Fort-Willian and Fort Augustus-Lochness, which has become famous for its lake and mainly for the mythical and famous “Lochnes Monster”.

A walk through the settlements of the Highlanders
As for the settlements and the daily life of the inhabitants, the traveler will come across the ”traditional” Scotland. The traditional bagpipe and accordion dominate the musical tastes of the Highlanders, while adherence to tradition is also present in their costumes, which allude to earlier times. Among them, one can meet even the famous “kilt”, spectacular skirts with the color designation.