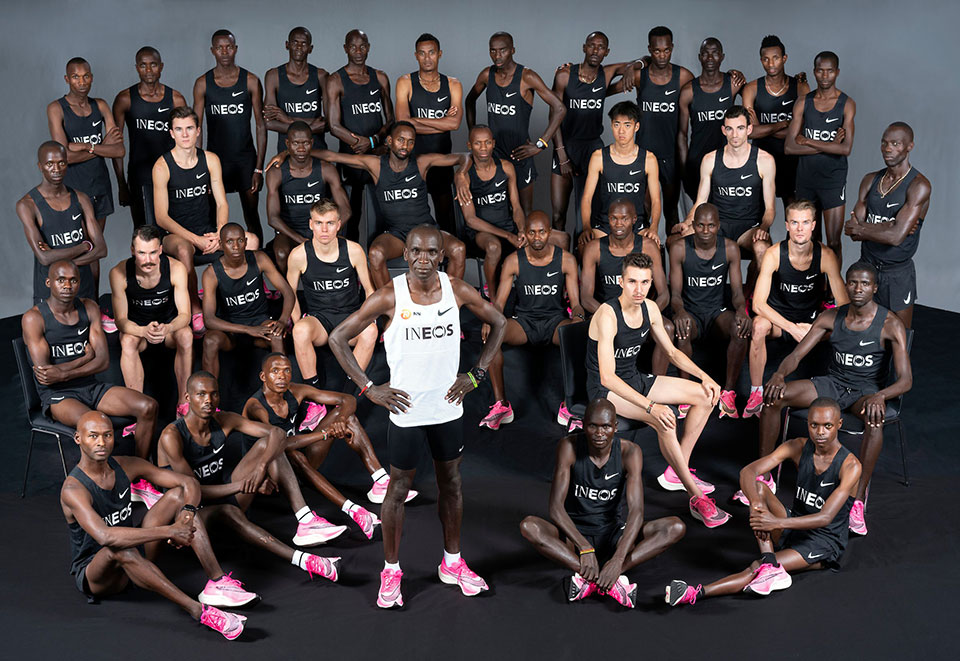 On a recent flight from San Diego to Toronto, I decided to explore the Air Canada entertainment options and discovered a documentary titled, Kipchoge: The Last Milestone. It was described as “a cinematic portrait of world record marathon holder Eliud Kipchoge as he prepares to break one of the last milestones in sporting history: the sub-two-hour marathon.” Having run 13 marathons myself, I thought it would be amazing to watch the current world record holder embark on an endeavor that I had always regarded as unthinkable during my lifetime.

To put this in perspective, go to your local track and try to run one lap in 68 seconds. The chances are good that you won’t be able to do it. Then try to wrap your head around what it would be like for a human being to run at that pace for an entire marathon (105 laps) – mind-blowing.

It Takes a Team

While Eliud Kipchoge is likely the only runner alive today who could have broken the two-hour barrier, I found the team that helped him achieve such an astonishing goal equally impressive. In addition to the group of 35 pace runners (and six alternates) working in shifts to help Kipchoge maintain his pace and reduce wind resistance, there was much more happening behind the scenes. The engineers, physicians, nutritionists, physiotherapists, coaches, meteorologists, public officials, and other event managers were responsible for attending to all the meticulous details required to optimize human performance.

To give you an idea of what we’re talking about when it comes to details, consider this: If the pace car had run 0.1KPH too slow for the two hours, it would have taken two hours and 34.3 seconds to run the marathon distance, an error big enough to have derailed the entire Challenge. As a result, the INEOS 1:59 Performance Team had to ensure that countless other obstacles didn’t stand in the way of achieving peak performance. If you’re interested in learning more about what was involved, check out.

A Masterclass in Team Leadership

INEOS 1:59 Challenge CEO Sir Dave Brailsford brought a rich background in cycling. Being a former rider, he led Great Britain to unprecedented performances in multiple Olympic games and helped two different riders win Tour de France. However, his charge in leading the 1:59 Challenge was not to win a race but to test the bounds of human physiology and performance by creating optimum conditions and developing strategies that would put Kipchoge in the best position to break the 2-hour barrier.

Speaking on an episode of the Leaders Performance Podcast, Brailsford described his approach to leading a multidisciplinary team. He talked about getting them started, warming them up, and helping them perform at their best. The team would only be together for a finite period for a singular purpose before going their separate ways. Brailsford built and led the team for the task at hand.

It reminded me of my days working in political campaigns where you brought together talented, passionate people to do a job to achieve a specific goal in pursuit of a larger purpose. The winner of a US Presidential election, for example, goes on to be the leader of the free world; the loser joins the citizen ranks like everyone else. There’s no in-between. In the case of the Brailsford team, they would make history, or it would all be for naught.

Brailsford’s approach reminded me of the A Time for Three Words CEOWORLD article I wrote in January. My three words for 2022 are Purpose, Clarity, and Intentionality. Brailsford clarified the team’s purpose – not simply to help Kipchoge break two hours (the goal indeed); he saw it as something more significant. The overall purpose was to test and expand the bounds of human potential in a way that would inspire the world and show countless people that they have no limits. Moreover, he asked each team member, one by one, what the team’s purpose meant to them personally. By creating an emotional connection to the work, he inspired a heightened level of engagement for all involved.

Brailsford also required what he described as “hyper-level communication” so the team members would get to know one another deeply. With experts from so many different disciplines, it was inevitable that they would have to collaborate in ways they could barely imagine. They needed to possess the courage to ask for help and understand whom they should ask at any given time.

One of the more fascinating examples was the creation of a new formation for the pace runners who surrounded Kipchoge during the run. Rather than the V formation familiar to watching birds in flight, the team discovered that a Y formation reduced drag more effectively. Unfortunately, it would require my writing an article about this one innovation to explain it fully, so I invite you to visit for a complete description of the science and what was involved in discovering a whole new way to run marathons.

On October 19, 2019, in Vienna, Austria, Eliud Kipchoge crossed the finish line in 1:59.40.2. While the official world record for running 26.2 miles remains at 2:01.39 (Kipchoge – 2018 Berlin Marathon), to minimize the accomplishment in Vienna would be to miss the point entirely. Kipchoge not only opened our minds to the power of human potential but also showed us how it required a team to make breaking the 2-hour barrier possible.

Behind every world-class athlete is a team of people who supports their success. During this week’s Masters, we’re seeing something no one would have predicted a year ago – Tiger Woods walking Augusta National, not to mention shooting an opening-round 71. Tiger Woods can’t say enough about the team who made this comeback possible despite his extraordinary individual effort.

I invite you to watch the Kipchoge documentary, appreciate Tiger’s comeback, and bring your team a healthy dose of purpose, clarity, and intentionality. Go team!