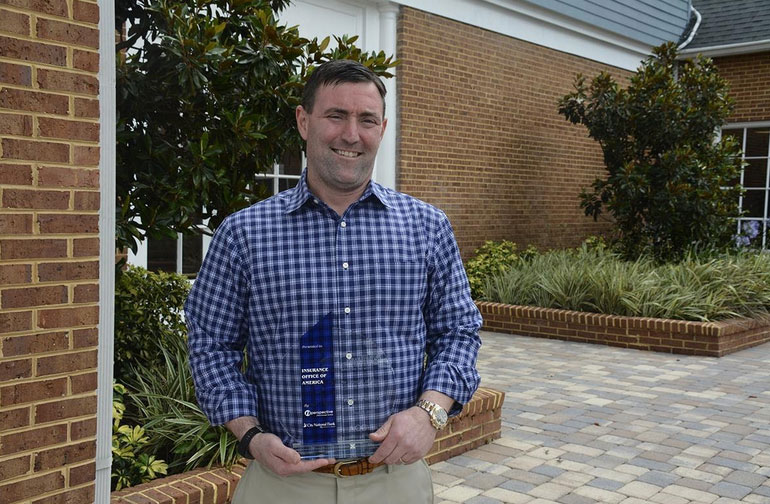 Running a full-service insurance brokerage is generally a straightforward proposition. The company’s agents prospect for clients and write targeted insurance policies for those who come on board. Agents earn commission for the policy sales and retention.

As chairman and CEO of Insurance Office of America (IOA), Heath Ritenour oversees a different type of full-service insurance brokerage. Agents have an equity position in their books of business, which encourages them to maintain an entrepreneurial mindset.

In addition, the IOA culture places a high value on work-life balance. Agents who want to coach their child’s sports team, or otherwise spend time with their family, are encouraged to do so even if it means they are in the office less frequently.

Insurance Office of America (IOA), co-founded in 1988 by John and Valli Ritenour, is a full-service insurance brokerage. The company is based in Longwood, Florida, part of the Orlando metropolitan area.

Over 1,300 associates staff more than 60 IOA branch locations in the United States. In addition, IOA maintains an overseas office in Belfast, Northern Ireland.

Currently, IOA is one of the United States’ most rapidly growing independent insurance brokerages. In fact, IOA is ranked 11th on the Insurance Journal 2020 Top 50 Commercial Lines Agencies list.

Today, John Ritenour is enjoying a well-earned retirement. Since 2008, his son Heath Ritenour has served as IOA’s chief executive officer, and he became chairman of the board in 2019. While building on his father’s success, Ritenour has embarked on a mission to bring the insurance industry into the 21st century.

As the Insurance Office of America chairman and CEO, Heath Ritenour sits in the executive suite. He is knowledgeable about personal and business lines, specialty market coverage, and risk management. He is equally comfortable consulting with individual policyholders or providing complex coverage to large companies.

To reach this pinnacle of success, Heath Ritenour started at the bottom. In 1996, he joined IOA as an intern while attending college, later joining IOA as an insurance agent.

Rather than capitalizing on his father’s name, Heath Ritenour took time to learn the nuts and bolts of the insurance industry. To build his own book of business, Ritenour spent 12 years making up to 100 cold calls a day. He focused on building relationships rather than making sales, an approach that gradually gained him loyal clients who provided referral business.

Today, Ritenour says he would not trade those grueling years for anything. The experience gave him valuable knowledge and industry exposure he could not have otherwise obtained.

While Heath Ritenour continued to learn the complex workings of the insurance business, his father, John Ritenour, was grooming him to take over IOA’s operations. After Heath had spent 10 years with the company, his father felt it was time for the younger Ritenour to take the reins. In fact, John Ritenour had praised his son’s leadership skills.

However, Heath repeatedly turned the opportunity down. Although he had excelled as a leader on his sports teams, he did not feel ready to assume the CEO role. Heath very succinctly explains his reluctance to take this major step. “I’m a sports guy, not a sales guy. It scared me.”

John made one final request, and asked Heath to pray about the answer. During his prayers, Heath stated the reasons he was not the right fit for the CEO role. Looking for an easily defined answer, he discerned only a question: “If not you, then who?”

After more careful reflection, Heath Ritenour realized that taking the IOA leadership role would ensure the preservation of the company’s innovative culture. In 2008, Heath Ritenour accepted his father’s invitation to step into the CEO office, and in 2019, Heath Ritenour was named as chairman of the IOA Board of Directors.

A Typical Day in the CEO Suite

Heath Ritenour’s CEO role means he performs many executive oversight functions. The company’s other businesses in the family of companies may also require attention. As a result, each workday includes a different mix of responsibilities.

By staying organized and using a good time management system, Heath Ritenour accomplishes his daily goals. He also remains advised on changing situations in every aspect of the business, enabling him to better plan IOA’s path forward.

The Launch of the SimplyIOA Digital Platform

As Heath Ritenour looks to fine-tune IOA’s operations, he and his management team have reinvented one of the most complex and time-consuming processes in every insurance brokerage—the path for purchasing personal lines insurance. He and the IOA team created SimplyIOA, a new way to compare and purchase home and auto insurance online or over the phone in minutes.

On visiting SimplyIOA.com or when speaking with an agent, consumers provide just five essential details. Then, SimplyIOA searches its network of trusted insurance companies to find the highest-level coverage at the best price.

SimplyIOA is available in Florida, Georgia and Texas and ultimately will be made available nationwide.

Advice for Growing a Business

Becoming a successful entrepreneur generally begins with developing high-level expertise in a specific area. Making a long-term commitment to the business and devoting the necessary resources to achieve preset goals are also important.

During his IOA career, Heath Ritenour has demonstrated all of those attributes. In addition, he has developed a singular habit that he believes will be useful to all entrepreneurs.

Ritenour strongly emphasizes the value of curiosity. By confidently analyzing situations from that point of view, emerging opportunities (and challenges) will likely become clear. Creative solutions and alternatives may also present themselves.

The “Highest and Best Use” of Time

To enable IOA’s continued expansion, Heath Ritenour focuses on projects that represent the best use of his time. If he determines that his current task does not meet this “highest and best use” criterion, he switches to one that moves the company forward.

The Value of Organic Growth

Heath Ritenour firmly believes that business owners should grow their companies by building customer relationships and generating sales. “In terms of business growth, I believe the true measure of any successful business is its organic growth rate, rather than how many other businesses they can leverage up to purchase.

“Natural growth focuses on building strong leadership teams that will successfully handle whatever comes with eventual growth. It focuses on developing the internal infrastructure needed to expand successfully. These facets are crucial to not only attaining growth but sustaining it.”

Finding an Industry Ripe for Change

For entrepreneurs searching for a viable business idea, Heath Ritenour recommends finding an industry that still operates with an outdated mindset and antiquated systems. He lists the insurance industry as ripe for disruption and change.

Before jumping in with both feet, however, an entrepreneur should undertake careful market analysis and determine that there is still demand for the product or service. Then, the entrepreneur should automate and/or otherwise utilize technology to provide optimized customer service experiences.

This timeless quote from Albert Einstein illustrates that finding new ways to do things is essential for many aspects of life: “We can’t solve problems by using the same kind of thinking we used when we created them.”

In 2015, Heath Ritenour faced a life-altering challenge that had nothing to do with IOA’s operations. A healthy, active man in his 40s, he was unexpectedly diagnosed with cancer. Fortunately, the disease was caught in the early stages, and Ritenour’s doctors were optimistic that surgery and chemotherapy would lead to a good prognosis.

Instead of keeping his health crisis a secret, Heath Ritenour shared a company-wide message about his cancer battle. He emphasized that IOA operations would continue as usual, and he would maintain his CEO responsibilities.

After viewing this sincere message, other male employees with similar symptoms were also diagnosed with early-stage cancer. Ritenour was grateful that he could use his personal challenges to help his fellow team members. In addition, once he acknowledged his lack of control over his situation, he was able to appreciate the positive parts of his life.

Currently, Heath Ritenour continues his roles as IOA’s chairman and chief executive officer. He also serves as president of the IOA Foundation. This nonprofit organization helps to give back to central Florida through fundraising events, charitable programs, and sponsored sporting competitions.

In his free time, Heath Ritenour spends every available moment with his family. Reading is also a priority, as he feels it’s important to keep learning and growing.