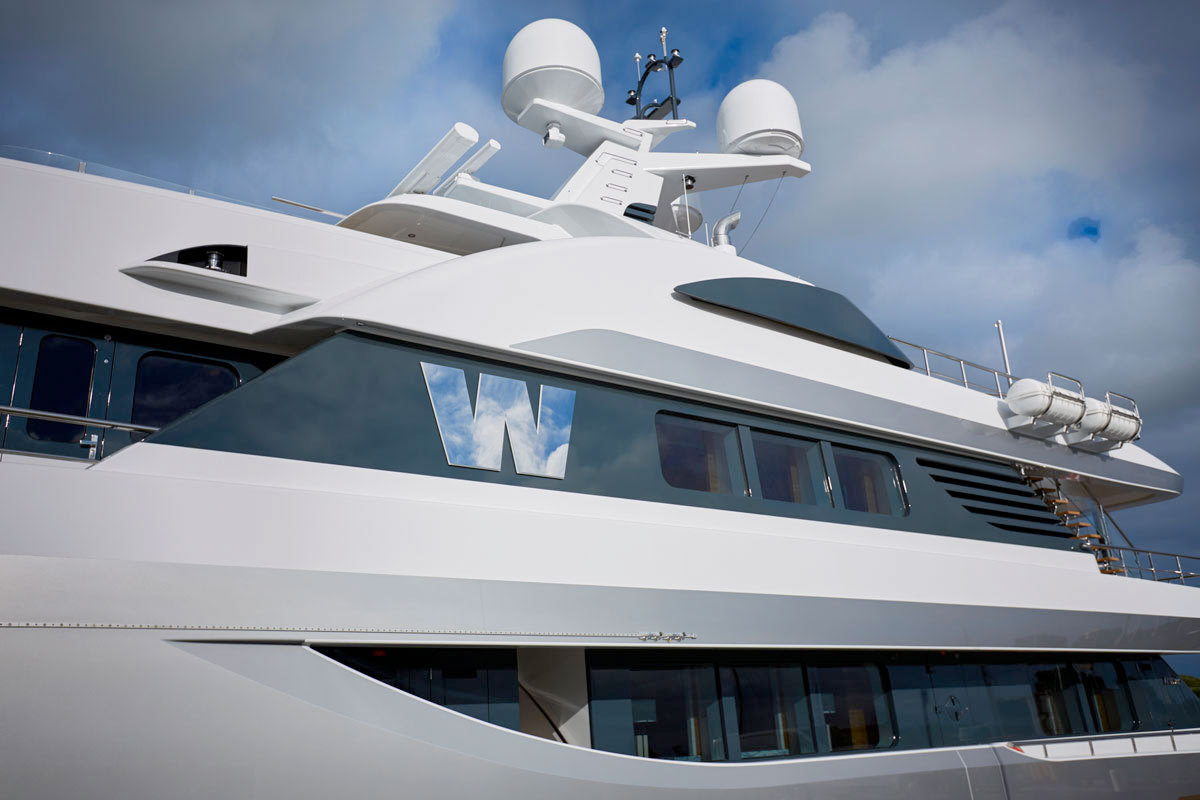 Feadship has completed a major refit in its home base of the Netherlands of the 57.60-metre superyacht W, originally launched as Larisa seven years ago. Her striking new metallic silver hull glistened in the Dutch sunshine as this contemporary classic Feadship completed her post-project sea trials and was handed back to her delighted owner on Friday 17 July.

The new livery and antifouling were part of an enormous range of alterations made to W over the past ten months to reflect the ways in which her experienced owner likes to enjoy life at sea. “After buying W in 2019 I set out to not only refit my newly acquired Feadship to my specific requirements but to also renew her in every possible respect while ensuring that she remained 100% a Feadship,” he explains.

“Owning a Feadship gives one an enormous sense of pride and I am convinced that the only way to retain full Feadship pedigree is to access the formidable talents and capabilities of the entire Feadship organisation. It was wonderful to be able to bring her back to the Netherlands and know that she would be upgraded by many of the same people that actually created her seven years ago. No one in the world knows a Feadship like the people that actually built her and that shows in the exceptional results of this refit project.” 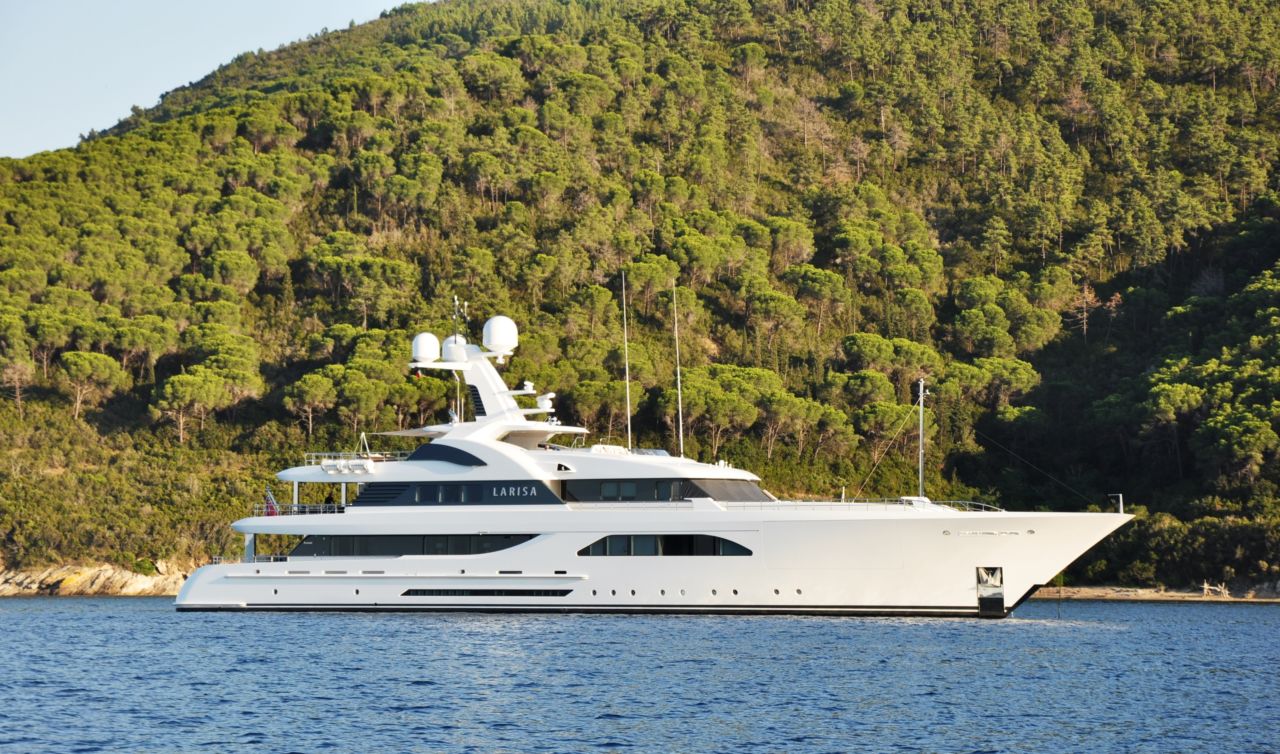 From four to six staterooms

The foremost renewal activities included placing a larger Jacuzzi on the sun deck and implementing major modifications to the interior layout. An inspired improvement to the main deck lounge has fashioned a far more open and uniformed space, while the number of staterooms available has been increased from four to six. This allows four extra guests to now enjoy the pleasures of W and increase the total POB capacity with crew from 22 to 26.

The former VIP stateroom on the lower deck has been converted into two equal-sized and equally luxurious guest suites to port and starboard. A double Murphy’s bed has been installed in the bridge deck lounge and the adjacent powder room refitted into a dedicated marble-clad bathroom for those times when the lounge is used as a suite for guests, who will enjoy the best of views as well as lots of space. The fine interior style developed by Bannenberg & Rowell Design in 2013 has been largely retained, complemented by various personal touches made by the owner together with Fort Lauderdale-based A La Mer, Inc.

On the technical front, the starting point for the owner was to ensure that all major systems on W were dialled back to ‘zero time. The wheelhouse on W has been given a comprehensive upgrade with all-new screens. All on-board lighting has been switched from halogen to LEDs, which necessitated the removal of all ceilings and relaying of all cabling. The AV and IT systems have been totally renewed and a new sewage treatment unit fitted. Both MTU main engines have been completely overhauled and all other systems reviewed and modernised where required. Many other smaller maintenance jobs were also catered for, from sprucing up areas of the bridge coloured by the sun to adding new glass inserts to all the interior cupboards.

This impressive refit involved close cooperation with the owner’s team and between two different Feadship yards. The project was initially started in Aalsmeer with the dry-docking phase taking place in Makkum. This enabled all the extra work requests from the owner’s team to be fully met without having any impact on other ongoing timetables.

It also showcases the benefits of Feadship’s flexibility to operate between several locations with shared resources and know-how.

The projected delivery time was extended due to a doubling of the scope of the activities and the need to take the coronavirus into account. The latter did lead to a slight lowering of the work pace as yard shift patterns were staggered to enhance safety, part of a rigorous series of measures implemented across all four Feadship yards in the Netherlands to ensure they continue to operate in a Covid-secure manner.

“An additional challenge was the need to have travel restrictions lifted before key crew members could rejoin the vessel,” explains project manager Hans van der Wiel. “The owner was very impressed with how these unprecedented issues were handled, especially because much of the refit had to proceed with only ‘remote’ consultations possible with his team. The owner’s original decision to send W from the Med to the Netherlands for the project based on Feadship’s unrivalled reputation for keeping to agreements has been fully validated.”

The second reason why W was placed in Feadship’s hands was the client’s desire to ensure that his newly acquired Feadship remained just that, a Feadship. “The owner and his team are very pleased with the final result,” adds Van der Wiel. “They asked for a wide array of additional activities to be carried out once the project was underway confident that this would be money well spent. And the owner is delighted that the end result does not look like a refit – you really would feel that W was built this way in the first place.”

As W now gets ready to embark on a new season of adventures, she will also be awarded the Feadship Authenticity Certificate. This confirmation of premium Feadship quality is granted to Feadships refitted and/or maintained under the auspices of the My Feadship programme managed by Feadship Refit & Services or to those that have been inspected and approved by the Feadship Authenticity Committee. Offering official recognition of a Feadship’s tip-top condition, this certification and any related warranty clauses adds to the resale value as well as giving complete peace of mind to owners.

tweet
share on Facebookshare on Twittershare on Pinterestshare on LinkedInshare on Redditshare on VKontakteshare on Email
Emma LondonJuly 20, 2020