CEOWORLD magazine > The Latest > Stats Gate > Countries With Best Scientists From IT Industry, 2020 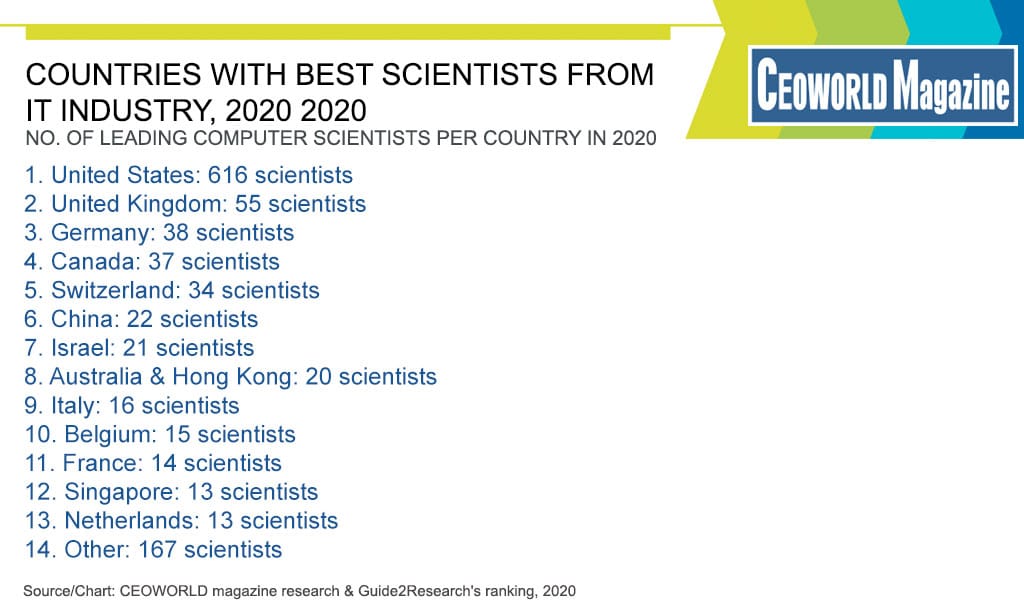 There are some countries that have a particularly significant number of leading IT scientists. The United States comes first in the list with the countries globally with top scientists in the area of computer science and electronics for 2020. More specifically, the United States has 616 scientists representing 61.6% of all leading scientists. Eight out of ten scientists in the top 1% come from the United States, the other two are from Canada. The dominant position of the US remains almost the same since 2018. For the third consecutive time, Professor Anil Jain, from the Michigan State University, US, tops the list of leading scientists with a high h-index of 188. Professor Jain is famously known for his seminal work in biometrics.

The above first place for the United States emerged from Guide2Research’s ranking for 2020, including the countries with the top scientists in the area of computer science and electronics. The evaluation was based on the University in which they serve and not on the country of origin.

Note that Guide2Research is a leading source of information for computer science and electronics. In fact, more than 6,000 profiles are being evaluated in order to be compiled the list of top scientists in the industry. The ranking is based on the important contributions of each scientist based on the Google Scholar h-index, which is the largest and most widely accepted bibliometric database of its kind available to the scientific community.

Asia has seen a significant increase in the number of scientists presented on the list with 55 scientists listed in 2020 in comparison to 37 in 2018. Countries in which the number of leading scientists has decreased include Germany (44 scientists in 2018 and 38 in 2020) and France (a decrease from 17 to 14). For Europe, Professor Andrew Zisserman from the University of Oxford, UK is ranked first in the region with a world ranking of 11. At the same time, Professor Guanrong Chen from the City University of Hong Kong leads the top list in Asia with an h-index of 149 and world ranking at 16.

Greece may not be in the top 10, but it is included in the first 20 countries with the best scientists from the IT industry. Greece has a strong community of scientists in the critical field of electronics and computers. The country is distinguished globally for its performance in terms of the number of leading scientists in the field of IT industry, surpassing many other countries in the world, which have a large scientific potential in this sector.

Greece’s performance is excellent, taking into consideration that the position it holds for 2020, is much better than countries – leaders of digital technology.

share on Facebookshare on Twittershare on Pinterestshare on LinkedInshare on Redditshare on VKontakteshare on Email
Maria GourtsilidouJune 18, 2020