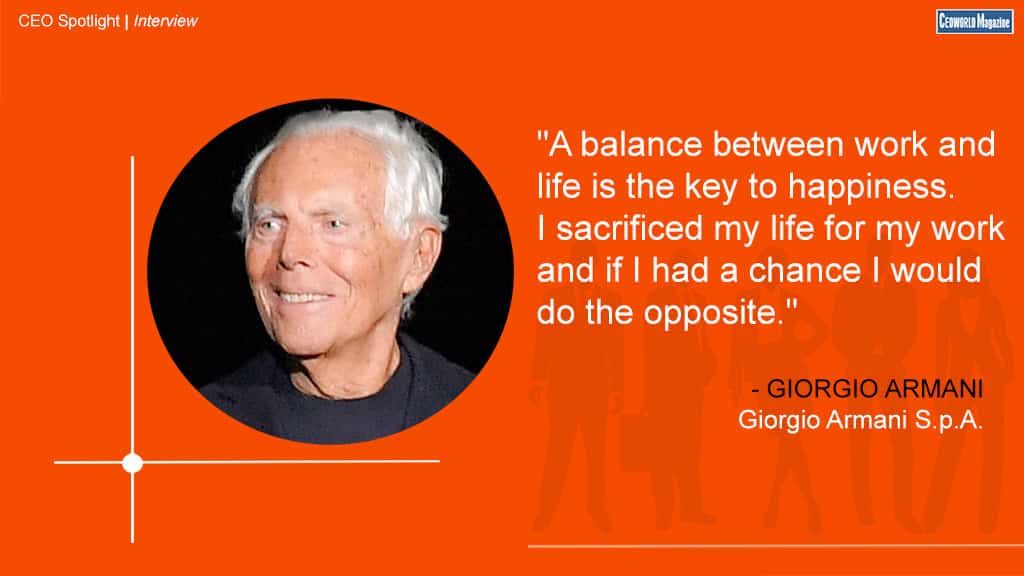 In the world of luxury fashion, Giorgio Armani is the name that inspires awe. He is an Italian fashion powerhouse who has established his reputation through his many labels each catering to high-end, critically acclaimed fashion areas and generating lots of profit. But, any well-made fashion designer has a story of his or her own and cannot be solely identified with how much sales their labels make in the market.

Giorgio Armani is one of those who could have been a medical practitioner but chose to be something else. The decision to change his career plans and step into the world of the fashion industry is what brought in a fresh wave of change. It is about this man and the labels which we are going to talk about. I am going to give interesting details, 5 in number, about him and his world. So, here we go!

Cinema, if given a chance

Giorgio has experimented with careers a lot in his life. He was once inspired to become a doctor, attended Med School for three years, dropped out and moved to join the Army. But, then, that life did not suit him and he shifted his focus to an unconventional career at the time: fashion. However, if you asked him today whether he would do fashion again, he might have a different answer.

With time, he developed a strong interest in the world of cinema. He is known to have expressed his desire to become many things in the film industry such as an actor, producer, and director. Whatever may be the case, he would have been wonderful, whatever course he took.

It is his and his business alone

If you know anything about luxury fashion, then you would know that many fashion brands are known for their large-scale acquisition such as LVMH. In fact, fashion brands like the prospect of being marketed under a stronger and more reputed label. However, Giorgio Armani has resisted that temptation long and will most likely continue to do so in the future. His empire is massive and all of it is owned and operated by him. He controls everything his labels produce or market, from cosmetics, watches, to branded hotels; it is his standalone business—no one else’s.

It is not uncommon to find businesses, even the most well-established ones, reel under the pressure of debts. Expanding operations or making up for losses require financing, but there are businesses like the ones under the aegis of Armani which self-finance themselves. Giorgio Armani claims that he does not owe or has ever owed anyone anything. He is quite clear about who he has been: he would finance other businesses but would not take a single penny from them.

He offers the entire package

In case you thought that Armani is just about high-end clothing, then you do not know him well. Ever since his explosive debut in the fashion industry, he has expanded his business into other areas which he thinks should be associated with fashion. Today, he owns and operates multiple labels each dealing with specific areas of fashion and beauty. Today, his labels cover kids’ clothing, sweets, flowers, hotels, and cosmetics. The names of some of his labels include Dolci, Armani; Fiori, Armani; Casa, Armani; Armani Junior; Armani Jeans; Emporio Armani; Armani Exchange; and Armani Collezioni. He also tends to offer combinations of products, such as his hotels and cafes are always coupled with his stores.

The first one to go live on the Internet

Giorgio Armani may have started late in his life as a fashion designer but he caught up with the latest trends like no other. One example is such that it went on to create history. In 2007, Giorgio Armani became the first fashion designer to go live on the Internet. You may say that there is nothing spectacular about it, but it sure was a new and daring thing at the time when he did it. Many commented that the move would enable quicker fabrication of his styles—but, Armani knows that no matter how well-guarded you are with designs you cannot protect them from imitation. He knows that his creations will sell where they should.

tweet
share on Facebookshare on Twittershare on Pinterestshare on LinkedInshare on Redditshare on VKontakteshare on Email
Ayushi KushwahaMarch 12, 2020