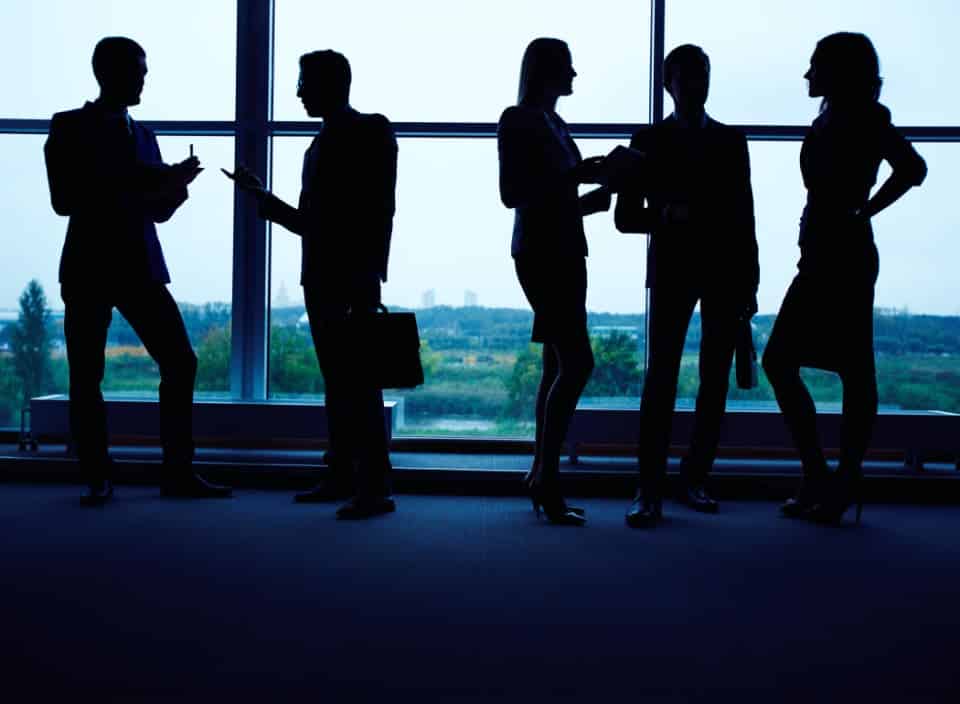 The first CEOs in history, or rather pre-history were clan and tribal leaders thousands of years ago, notable Greek, Roman and Persian leaders like Alexander the Great, Julius Caesar, and Persian King Xerxes the Great were all the rage. These heads of state were also CEOs, responsible for the successes and failures of the actions and decisions they made each day while in control. Similarly, as is the case today these ancient leaders often confided in a select few advisors: personal, military, and political to help them craft a winning plan. Today we call these advisors the Board of Directors, a body originally designed to advise, monitor and champion the CEO. Later as public SEC rules matured the BOD became focused foremost on maximizing shareholder wealth and has become like the Oracle Temple at Delphi the historic corporate institution leaders must look to for wisdom and guidance. 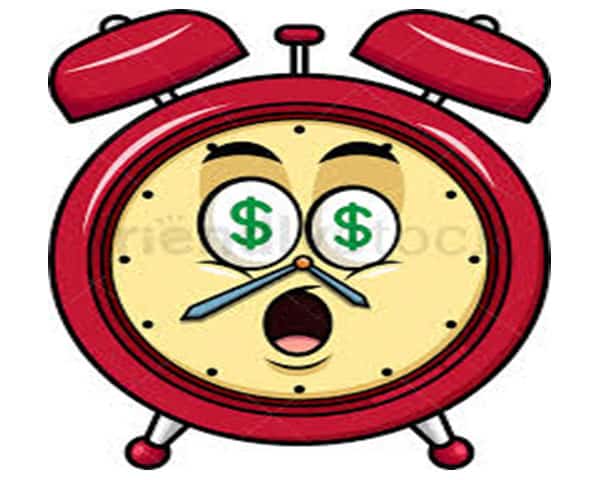 Nevertheless, as time passed into modern history it was the Monarchs and Czars essentially who inherited the conquests and properties of their forefathers taking the reins of power and responsibility to acquire more. Most ruled from the time they became top dog until their death, which was by most accounts violent and synonymous with regime change and significantly more unpleasant than early retirement of CEOs today as a rule of thumb. Nonetheless, back then CEOs were far more in control of their own destiny, and to stay on the job meant stacking the deck in your favor.

In the early days of American capitalism, the icons of the day aka Robber Barons also ruled the roost of empires and for good reason, they created them. For these ruling class business tycoon-elites the thinking was simple. Many will benefit from their creations hence such rare birds should be left alone. This translated the idea that maximizing ownership-wealth was the very essence of western capitalism, the American Dream. A CEO decision then was thought to be always in the best interests of the business and its workers. And if workers are happy, the community is happy. If the community is happy, the politicians are happy, and when politicians are happy there are fewer rules, fewer regulations, and a boundless field of opportunity for industry and their leaders to grow and control massive wealth and power. In fact, the US government had to ask JP Morgan to help bail out the US treasury in the bank Panic of 1907, exemplifying that such concentration of wealth and power in a single corporation meant something had to change. And by mid century US corporations, while still big and controlled by dynamic commanders-in-chief, began to face growing concerns about who the real winners were in their world. In the 1950s a typical CEO earned 20 times the average worker salary. That might not seem fair to some. But today, that gap is more than 360 times average worker wages according to Executive Paywatch reports.

As CEO compensation continued higher through the 1970s the average tenure turn-over rate for the top gun was still 10% of Fortune 500 companies, 11% in the 1980s according to Kaplan & Minston research, at Chicago Booth, and the main focus through the 1990s was the same. CEOs would be measured by stock performance. And stock performance was measured by (3) things according to Kaplan & Minton 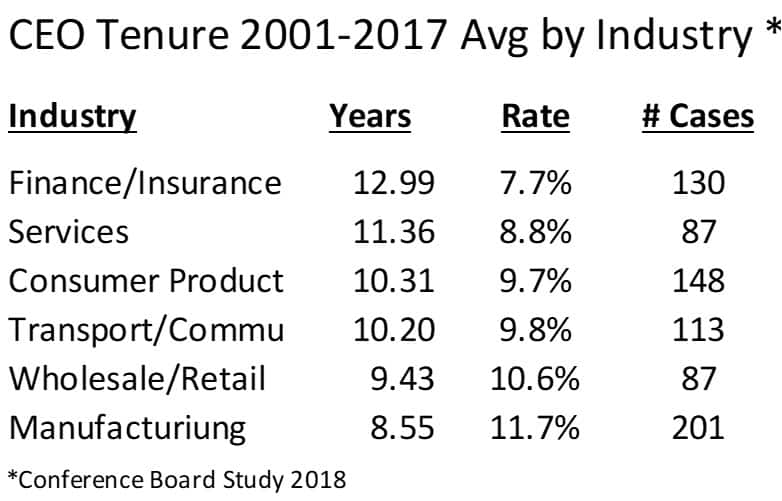 In the 2000s, a disparity in tenure-ships by industry was evident. While finance and insurance CEOs lasted the longest in the job (13 yrs), manufacturing company CEOs had even less time. Part of the pressures came from Sarbanes Oxley Act (2002) after the corporate fraud accounts and collapse of notable icons Enron, Worldcom and Tyco required independent Board of Director members, not just friends and allies, which in turn caused a significant drop in tenure the following year in 2003. Five years later the financial crisis and Great Recession (2008) hit after the collapse of the real estate loan market caught banks off-guard and resulted in both a recession and a bevy of new regulations on our financial and lending practices in America. And when all was considered many thought the game was up for CEOs whose collective tenures in 2009-10 dropped to 7 years. But like a spring rose after a cold winter they bounced back. Over the 17 years from 2001 to 2017 the average CEO tenure for large public companies was 9yrs according to the Conference Board CEO Succession Practices annual report on CEO Tenure.

This means that over the last 50 years CEO tenure has not trended downward for long, rather it’s become more stable as the chart shows, even considering the impacts over the last 20 years.

Still, while many long-term CEOs have been on the job for decades including Les Waxler of L Brands (55 yrs), Warren Buffett of Berkshire Hathaway (48 yrs), Al Miller of Universal Health (39 yrs), Jeff Bezos (21 yrs), despite the increase in lifespan, CEOs today face even greater pressures.

Today CEO tenure is still principally based on delivering the goods, that is profits and higher stock prices. According to 2019 Equilar research on CEO Pay Trends since 2014 CEO performance-based incentives have risen from 52% to 58% of total compensation today. This increasingly myopic short-term focus on stock performance makes for happy shareholders, and has rewarded CEOs with millions in executive pay for a long time. But there is a growing new question hitting the streets from activists, institutional shareholders, and independent directors these days all asking the same question. Are “shareholders” still the most important constituents in corporate America?

This past August 2019 the Business Roundtable (a group of 200 CEOs from America’s leading companies representing $7 Trillion in annual sales) issued a new Statement on the Purpose of a Corporation that pledged to include “stakeholders” alongside shareholders in their collective bond to recognize more fundamentally the wider swath of contributors to their success over the long term. For the last 20+ years the Roundtable mission was to generate “economic returns” to its owners. That has now changed.

In response to the new announcement CEO Alex Gorsky of Johnson & Johnson said “This new statement better reflects the way corporations can and should operate today.” In a separate interview (Nov-2019) with CNBC tv commentator Jim Cramer, the CEO of Salesforce.com Marc Benioff said the new CEO mandate can no longer just focus on the “stockholders,” rather the new model must include “stakeholders,” essentially everyone that has a stake in the success of the business including those in the business, in the community, and on the planet. And that also means to take “sustainability” as a core product message. Because it’s no longer just about ‘earnings per share,’ it’s about ‘impact per share,’ noted Bank of America CEO Brian Moynahand and Nestle CEO Mark Schneider. But, as to how they would be measured by the new statement… Crickets.

Nonetheless, this unprecedented acknowledgment by the CEO Roundtable may reflect times to come. And while it has yet to trickle down or across the business landscape, it’s too early to see how it will impact CEO tenure rates going forward.  Critics argue there was no mention of ESG.org (Environmental, Social & Governance) issues specifically, no targets, no measurements, and no time commitments specific to more contemporary concerns like the lack of diversity and the personal and ethical behavior of senior leaders these days. Nevertheless, the revised statement could make its way into the compensation calculus measures for CEOs in the years ahead. At the moment 60% of CEO comp is stock-driven or time-based option incentives. And adding a new layer of cost not tied to performance is a significant push-back. ESG is nice, but no one doubts that profits must still come first. Without those caring more about stakeholder concerns won’t hold much weight in the boardroom, or the corner office.

At the private company level, CEO tenure is even more of a bumpy ride, and turnover is less predictable. According to Mike Keeland a Vistage CEO Group Advisor, CEOs are under the gun more today than at any time in history. He sees causes for turnover to be widespread including personal accountability for nearly any business mishap, a focus on short term success & profits, high-performing CEOs being recruited away, and companies being sold or merged. What then is the future to behold?

The Future of CEO Tenure 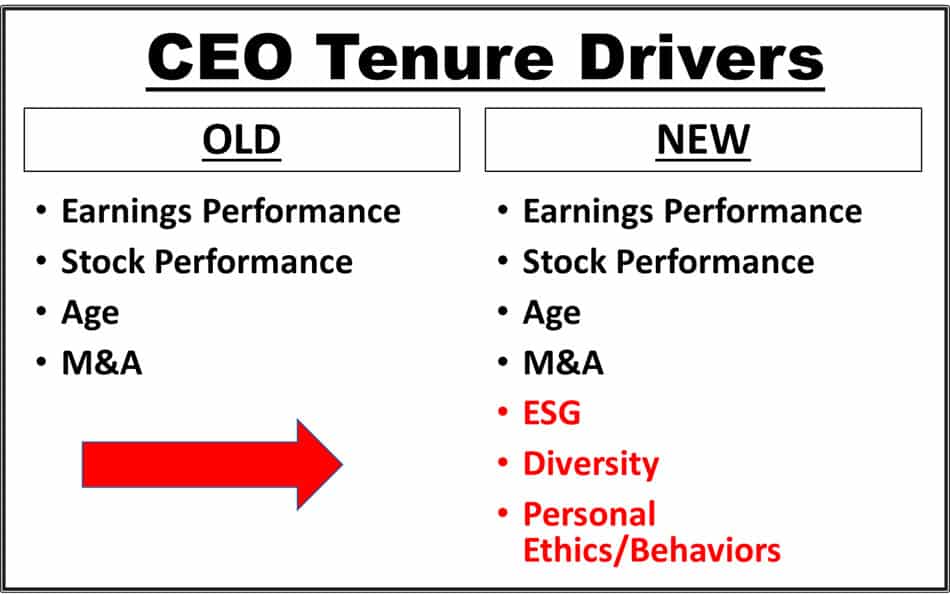 Today there seems to be fewer places and ways to hide from the echoing voices that were in the past mere siloed distractions. And while CEO tenure is still all about earnings & stock PERFORMANCE ahead of all else, until that piece is secure little worry about stakeholders vs stockholders will likely come into play, as long as CEO’s are compensated by a narrow financial slice of the growing panoply of important numbers. However, as we move into the next decade large institutional investors, out of concerns that corporations need to start taking on a more uniquely accountable role in environmental, social and internal governance, are making their voices heard. Today, more pension funds and endowments are directly and indirectly pressuring stock performance by investing more and more in higher ESG-scoring companies. And as these headwinds add more layers of constituency concerns for Boards and CEOs the bottom line is that change is coming fast to how CEO performance will be measured. Out with the old and in with a new basket of equally important performance metrics tied to compensation over a longer horizon, perhaps overlapping CEO tenure-ships cumulatively for the benefit of all stakeholders. All the same as they say, adapt or die. CEOs today know all too well as did many of their forefathers in the great history of empire, the clock is always ticking.

Written by Rick Andrade. Have you read?

For those who are planning their next business trip, read on for our list of the world’s best cities for bleisure travelers. As you continue to travel, we continue to listen: Here are the best hotels for business travelers to stay in Athens, Crete, Kefalonia Island, Corfu Island, Santorini Island, Halkidiki, Mykonos Island, Rhodes Island. Skiathos Island, Elounda (Crete) Kissamos (Crete) .

tweet
share on Facebookshare on Twittershare on Pinterestshare on LinkedInshare on Redditshare on VKontakteshare on Email
Rick AndradeDecember 10, 2019