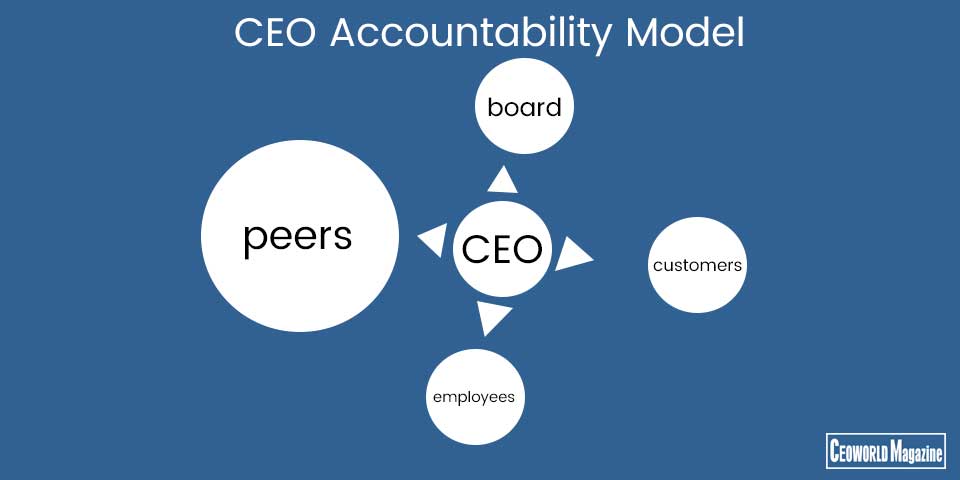 During our research for The Power of Peers, former Vistage CEO Rafael Pastor shared that CEOs have plenty of people to whom they are already accountable, including employees, customers, board members, etc.  As a result, he said most CEOs are loath to invite even more accountability than they already have. Pastor’s take on this, however, suggests that the kind of accountability we invite from our peers as part of a CEO mastermind group is quite different from investors, employees or customers.  Pastor carefully framed this accountability dynamic using the following model:

The arrow pointing upward points to people to whom the CEO reports, including the board of directors, shareholders, etc.  This is categorized as ENFORCED accountability. It’s enforced because a board of directors, for example, sets certain goals: revenues, profits, valuation, growth, international expansion, technological adaptation, etc. The board sets these goals for CEOs and holds them accountable to deliver on them.

CEOs are also held accountable by their employees and contractors, people who work for the organization. This EXPECTANT accountability is based on a set of expectations these stakeholders have for their leader. They expect excellent leadership, including having and communicating a clear vision for the organization.  They expect CEOs to fulfill their promises to them, whether that involves paying individual compensation or achieving company goals.

CEOs also have customers. CEOs are accountable to them because those customers have expectations that the CEO and the company will deliver on their promises. This is called ELUSIVE accountability because the customers are nothing if not discerning. Pastor said, “If I say to you I’m going to deliver a really great toothpaste, I better deliver it. I’m accountable to make sure it’s good toothpaste at a good price and it’s going to taste good to you and it’s going to brighten your teeth. If somebody else provides something better, they can turn to your competitor.  Customers are fickle, so a CEO has to stay sharp.”

The three types of accountability described are all imposed on the CEO.  So it stands to reason that a CEO might think twice before inviting an entirely new dimension of accountability into the mix. This brings us to the value of the fourth type of accountability. When CEOs are among their peers, they experience EMPATHETIC accountability from people who can relate to being a CEO.  These are the people who understand the unique challenges of sitting in the CEO chair and making decisions that benefit the entire organization. There is no escaping accountability to your shareholders, employees, and customers. What makes this dimension different is not only the dynamic of empathy, but also the fact that it’s voluntary.

Your CEO peer advisory group acts as a laboratory for personal and professional growth. Pastor  noted, “Look, this is a place where you ought to try out as much stuff as you can and it is totally okay to fail; better to fail in here before you show up to the board.”

One great example of this came from a CEO peer advisory group leader in Malaysia. When Richard Wong started his first group, among his first members was Mag Yoong, chairperson of Cargill Malaysia. She ran the largest organization in his group. Cargill had revenues of $1.5 billion at the time, whereas the other group members’ companies were in the $50 million to $200 million range, and all of them were run by men. Seeking to expand her business, Yoong wanted to build a container center based at the port, which would require a $55 million investment. She prepared a presentation that she was scheduled deliver to the worldwide corporate board of directors the day after the group meeting. Wong suggested she deliver her board presentation to the group as a practice run. After first saying no, she finally agreed.

As Wong tells the story, “The group tore her proposal to pieces, saying that it was too aggressive and too impersonal. With Yoong’s permission, they offered their suggestions for resolving the issues. She was clearly taken aback, yet grateful for the feedback. When the group took a break, she called her office and told her team to wait until she got back at the end of the day, stating it was going to be a late night and that they had to recreate their proposal to the board. At the following group meeting, Yoong reported back to her peer group, telling them that the board members said it was one of the best presentations they had ever seen. When they asked her how she did it, she gladly gave credit to her CEO peer group.” The group held her accountable, and she felt a sense of accountability to the group. Yoong trusted the group’s judgment, made the necessary changes to her presentation, and happily informed them about the results.

This is just one example from the myriad stories we came across during our intensive study of CEO peers groups throughout the US and around the world.  Inviting more accountability into your life is not an easy thing to do, but when you invite that accountability from your peers, it can make all the difference – food for thought as you contemplate how you plan to grow as a CEO in 2020.

tweet
share on Facebookshare on Twittershare on Pinterestshare on LinkedInshare on Redditshare on VKontakteshare on Email
Leo BottaryOctober 8, 2019