CEOWORLD magazine - Top Stories - Stats Gate - Top 15 Countries With The Lowest And The Highest Life Expectancy In The World, 2019 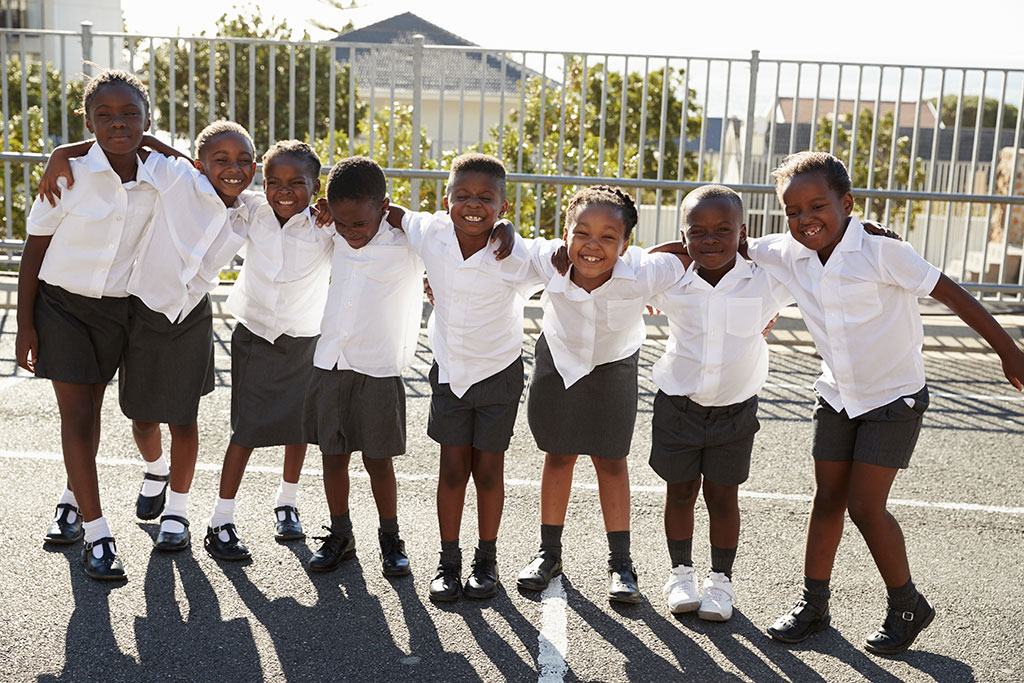 Longevity is usually used as a measuring stick to gauge the quality of life in certain regions. In many ways, it’s very accurate and consistent in doing so. For one, our own biology and genetic markers do have a role to play. The same can be said about our relationship with work and other environmental factors.

But when we start looking under the surface, certain factors seem to consistently lead to lower life expectancy, no matter the circumstances. There are also some factors that can have a detrimental impact on our lifespans, which are often overlooked. Let’s take a look at some of the countries with the lowest life expectancies on the planet. We’ll also look at the factors that may have the biggest influence on how long we live.

The Study: In recent research, conducted by Antibodies.com, Dr Stewart Newlove looked at a total of 30 countries and ranked them by order of highest life expectancy to lowest. He also looked at some of the lifestyle habits of the inhabitants of these countries, as well as other factors like access to sanitation and childhood vaccination.

What he found was that while countries that had a poor childhood vaccination and sanitation record usually reported lower life expectancy rates, there were some outliers. For instance, countries like Lesotho can have very high childhood immunisation rates, but their average lifespan is negatively affected by high rates of AIDS infections and other life-threatening conditions like tuberculosis. Certain factors, however, seemed to be more consistent across all countries. These are the top five countries with the lowest life expectancies according to this study.

Top 15 Countries With The Lowest Life Expectancy In The World 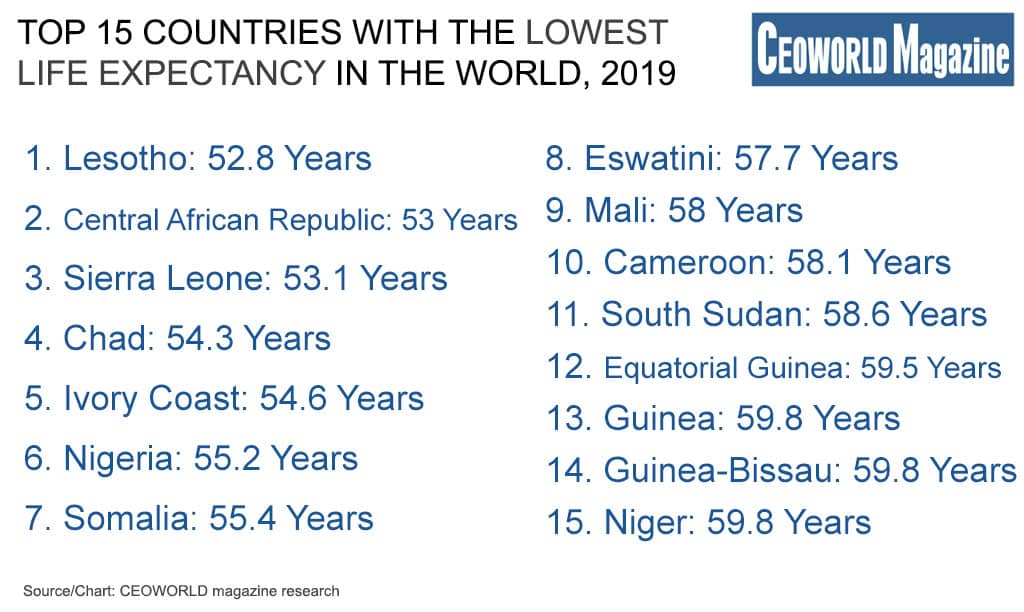 Lesotho was the country with the lowest life expectancy at 52.9 years. But this one had a few anomalies when compared to other countries on this list. For instance, the rate of alcohol consumption was pretty moderate at about five litres per consumer of pure alcohol per year. This is about half of what Spaniards, South Koreans, and Australians consume, all countries with higher lifespans. Only 30 percent of the people are said to be alcohol consumers as well.  In addition, Lesotho also had a very low prevalence of drug-related disorders and low obesity rates. The rate of smokers was relatively high, however, at around 54.3 percent.

Sierra Leone came in at third with an average life expectancy of 53.1 years. The first thing that stands out is the high rate of alcohol consumption in the country, with roughly 44% of the population consuming 5.7 litres of pure alcohol per year, on average. 50.1% of the population smokes, and the average smoker smokes around 4.5 cigarettes every day. On the other hand, the country also has one of the lowest yearly meat consumption levels in the world.

Chad came in fourth on the list with an average life expectancy of 54.3 years. One of the main factors that could be to blame is the poor sanitary conditions. According to the study, only 10 percent of the population could access basic sanitation. This is about the same amount as countries like South Sudan. The average mean BMI was also lower than the recommended guidelines by about 0.5 points. However, Chad has one of the best records when it comes to tobacco consumption, with the average smoker consuming only one cigarette per day.

The Ivory Coast was the fifth country on this list with a life expectancy of around 54.6 years. This could be, in part, attributed to its high level of alcohol consumption relative to other countries with lower life expectancies. The average consumer in the country drinks roughly 8.4 litres of pure alcohol per year, which is double that of countries like Israel and four times more than a country like Singapore.

Still, the country has a very high child vaccination rate when compared to other regions with shorter lifespans. As a matter of fact, about 83 percent of all children under the age of one are being vaccinated. The country still has sanitation issues, however, with only about a third of the population having access to basic sanitation.

Top 15 Countries With The Highest Life Expectancy In The World, 2019 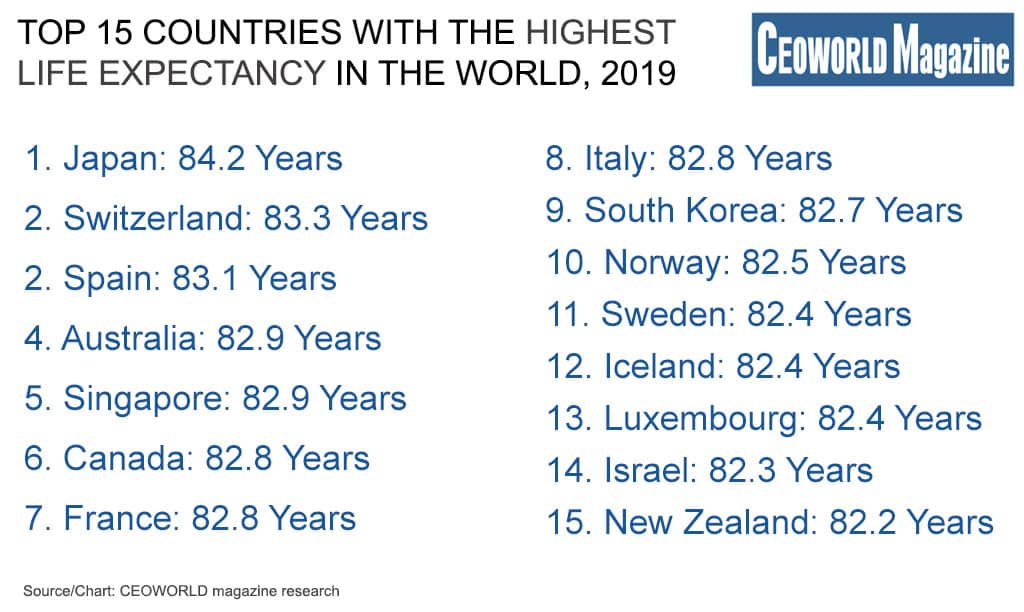 While we can see clear correlations between low access to sanitation, early vaccination, and a longer lifespan, this doesn’t tell the full story. And while some countries like Australia, for instance, can rank very high in things like meat consumption and obesity, they still remain at the top of the list.

Many factors can explain why the inhabitants of certain countries may have shorter life expectancies, but one factor where there seems to be the tightest correlation was the number of weekly hours worked. As a matter of fact, about 38% of the world’s countries with the lowest life expectancies had a 45-hour average working week or more. The only country with a high life expectancy in that category was Switzerland, with inhabitants living up to the age of 82 on average.

It was also shown that excessive work hours could literally take years off people’s lives. It was found that every hour spent working over the 48-hour mark could take as much as two and a half years out of a worker’s life. There also seems to be a direct correlation between fewer work hours and higher life expectancies, with countries that have low weekly work hours such as Australia, Spain, and France near the top of the list.

As we can see, many factors can influence lifespans, but they’re not always the ones we expect. Health organisations will have to pay closer attention to the risks of overworking in addition to other more commonly accepted reasons if they want to improve life quality and lifespans while reducing stress on their health system.

CEOWORLD magazine - Top Stories - Stats Gate - Top 15 Countries With The Lowest And The Highest Life Expectancy In The World, 2019