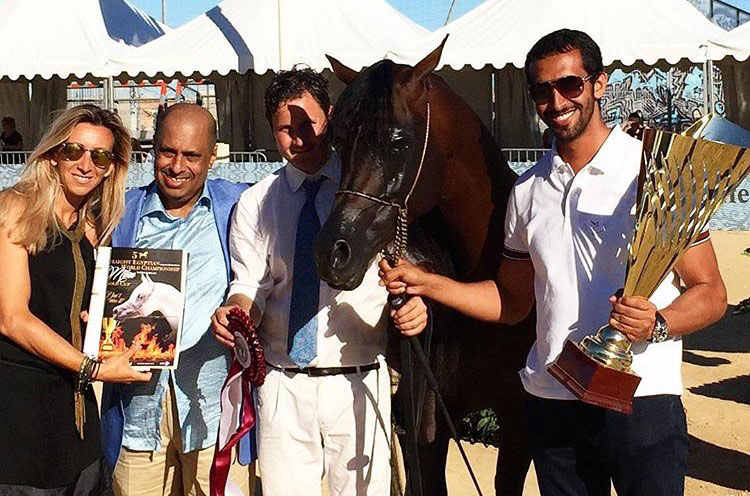 Horses were domesticated thousands of years ago, and their relationship with humans has evolved over the years.  Equestrianism has become a worldwide phenomenon driven by those who are truly passionate about horses and the sport as a whole. Hassan Al Mannai’s love for horses is beyond comparison, as he strives to help bring Qatar to the forefront of all things equestrian.

Born in Qatar, Hassan discovered his love for horses at the early age of 3. During his childhood he would spend hours riding them with his father. His passion for these graceful animals grew steadily over the years. As a teenager Hassan began attending Arabian Horse Shows around the world, and that’s when he truly fell in love with the Arabian horses.

In a quest to upgrade his knowledge and skills on the subject, he learned all he could from horse owners and breeders over several years.  In 2013, Hassan started his career with the equestrian industry. A year later, he took things to the next level and started the Al Reeh Stud, which specialized in breeding the best Arabian horses. Located in Qatar with a capacity of 45 horses, Al Reeh Stud has gained significant recognition, having won several medals in both national and international platforms.

Hassan was chosen to represent Qatar as one of the show judges at multiple international competitions in Qatar, Denmark, Italy and Russia. He was later made the Director of Arabian Horse Shows at the Qatar Racing and Equestrian Club. From organizing some of the biggest horse shows in association with ECAHO, to organizing Qatar’s largest Arabian Horse Auction, Hassan is doing everything he can to help make his dream come true – to help make Qatar a hub for equestrian sports across the globe. Hassan enthusiastically added “I hope to organize several more successful programs while using my knowledge, network and skills to help promote Qatar as a world hub for horse shows, especially the pure Arabian horse breed.”

Qatar is one of the oldest members of the ECAHO, which was formed in 1983. Hassan firmly believes in upholding their rules and regulations which are primarily focused at preventing malpractices during any of the shows. He also pays special attention to the welfare of the horses, ensuring that they are not ill-treated, harmed or exploited in any manner. Apart from promoting events affiliated with ECAHO, Hassan added, “I wish to foster mutual respect and collaboration amongst all members and member countries to make positive changes that will benefit the welfare of show horses, including Qatar’s Arabian horse breed.”

While Hassan has already made his mark in the industry, he has also done a great deal to help build recognition for Qatar in this field. He continues to host events, meetings and seminars to help people recognize and adopt ECACHO’s tenets so that people understand horses better, while also promoting a better environment for breeders, horses and participants alike.  Having responsible pioneers like Hassan Al Mannai usher in change, it is certain that Qatar will redefine the equestrian industry and the Arabian race horse will steal the show.

tweet
share on Facebookshare on Twittershare on Pinterestshare on LinkedInshare on Redditshare on VKontakteshare on Email
Anna PapadopoulosAugust 6, 2019