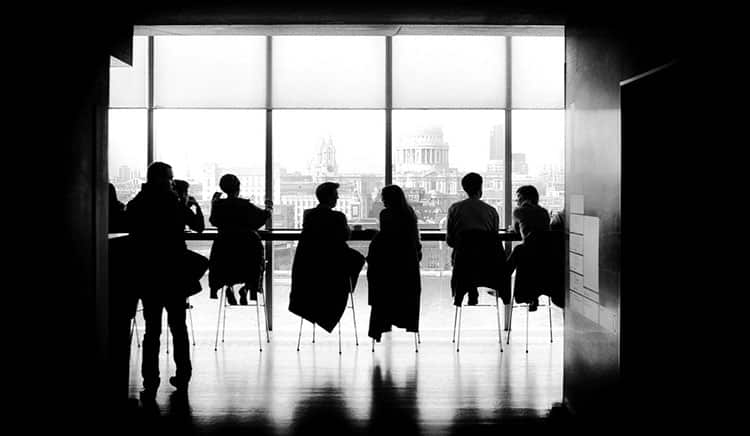 In management thinking circles over the years, VUCA has become somewhat of a buzzword to describe a business landscape that is volatile, unpredictable, complex and ambiguous.

Now many are beginning to question it: Does it really exist, or did leaders create it, so they could blame it for some kind of uncontrollable fate instead of taking responsibility for their failings?

Having said that, if we acknowledge that a single tweet can shake Wall Street and far beyond, then it is probably fair to agree that we are operating in a world where there is much that we do not know and cannot control – a world where, for example, disruption may come from technology companies rather than our traditional competitors.

If a dominant position is no longer a guarantee of sustainable success, if the new generation of talent has different expectations before engaging, if the customer is now more empowered than ever, if everything is changing all the time, can leaders be the same as before? Is operating in such an environment just about applying methods such as scrum and agile? Or… do we need a new type of leader?

One thing is certain: Companies need to be disruption-ready to survive, so they need leaders who are disruption-fit. What do they look like?

They are experts at scanning, and they know that observing the competitive landscape is by no means enough. Because everything is interrelated, they sense three layers simultaneously and understand how they influence each other. 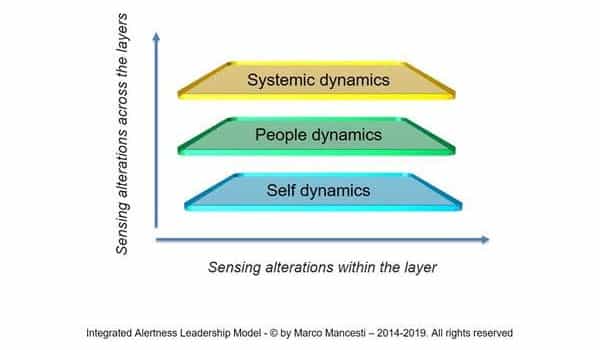 In the Model, a company’s systemic layer is composed of institutional goals, related measures (e.g. balanced scorecard), risks and strategy.

Here’s an example: In the context of the automotive industry, new generations do not necessarily want to own a car, autonomous cars are being tested, city congestion and pollution are reaching record highs, triggering new regulations etc. In such a situation, can an auto manufacturer still define its goal as “to be n°1 in terms of cars sold”? Some traditional players have started to broaden their scope, at least on paper, and reposition around global mobility solutions. What kind of performance indicators would illustrate such a shift? Are the risks the same as before? What about the strategic roadmap? Disruption-fit leaders sense changes in context and are on top of the consequences in their company’s systemic layer. 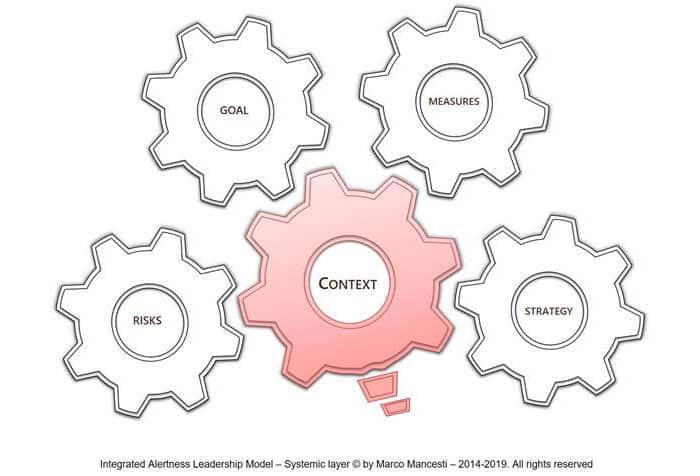 AI, robotics and other technologies are changing the workplace, with direct and indirect impact. Amazon’s main warehouse in Spain recently got stuck in a months-long conflict over remuneration schemes, which led to partial strikes. Behind this, and behind the yellow vest protests in France, is the rise of inequality. It’s all very well for a company to rely largely on robots and AI for its operations, but if its trucks cannot leave the warehouse…We find an indirect impact in the war for tech talent. The disruption-fit leader knows that the new generation is looking for purpose and for evidence that the companies they are going to work for are not only conscious of sustainability but also responsible in their concrete actions. For example, the disruption-fit leader could invest in training early to transfer people into new roles before their jobs disappear.

Operationally, the disruption-fit leader understands that a company’s structure is made up of teams. They are everywhere – a company’s board is a team, the executive committee, functional management teams, cross-functional teams, task forces, chapters, tribes and squads; all are teams. So the leader pays particular attention to sensing how these small structures are doing in terms of their coherent sense of purpose, integration between members, innovation skills and knowledge development, their full mastery of the ecosystem in which they evolve and a deep understanding of one another (see Do you have the right implementation team?). Teams are quite sensitive to changes in leadership, in the company’s ownership, the working environment, reorganizations or reputational hiccups, and crises in general. These context alterations can cause an unbalance in one or more of the above dimensions. The disruption-fit leader constantly senses the team dynamics.

Sensing layer 3: The three connections of self

When adversity hits, leaders can quickly find themselves alone. So, to remain well grounded, disruption-fit leaders need to be as sharp as athletes before a race. This can include physical training, of course, but not merely for the sake of it. Physical training, as well as practicing yoga, playing a musical instrument, singing or other activities help leaders to hone their first connection, the one connecting them to their body and emotions – in other words the present moment.

For leaders, the second connection, the mind, is natural – digging into the past for insight, and looking ahead to the future for scenario planning. The danger comes when that connection annihilates the others. This is an open door for burnout or becoming toxic to others. So, disruption-fit leaders stay hyper-alert to any imbalance in all three connections (diagram 1).

When it comes to seizing an identified opportunity or going through a company-wide transformation to respond to a threat, speed immediately springs to mind. But there is no point in speed if the leader is the only one on the train.

This is where the concept of acceleration (versus speed) comes in: Think about making a pass in a ball game. The perfect pass is one that lands right in the hands or at the feet of a team mate; however, a pass that creates acceleration stretches a team mate’s capabilities to reach it – challenging enough to create the acceleration but not so challenging that they miss the ball. The art is knowing where to make the acceleration, when, and how intense it should be.

As we’ve seen above, disruption-fit leaders are top-notch sensors; they should use observation of the three layers to determine how best to create informed acceleration. If analysis of the people layer shows that a transformation first requires a change of culture, then the acceleration focus should be put there, before for example stretching the sales teams to force a product into a market that might not be ready for it. In a nutshell, the disruption-fit leader is clear on the goal and tactical in the stretch. Speed all the time and everywhere may lead to performance in the short run, but ultimately creates exhaustion.

…Just as a professional boxer who sees their opponent’s every offensive move as an opening.

This is a mindset that requires courage and consistency. Courage because seizing an opportunity may be a leap into the unknown, like crossing the Rubicon and making an irrevocable move. Consistency, because it is not about one heroic action, but applying that mindset repeatedly. Of course, the disruption-fit leader doesn’t jump into deep waters without preparation. Again, let’s remember that they are top-notch sensors, first and foremost!

But why does it all matter? Seeing change as a source of opportunity is probably the best possible antidote in a world that is at times unpredictable, but not only. It is a question of establishing a balance between positive and negative, fighting threats with preventive or mitigation actions (this is still necessary), and catching opportunities to turn them into innovative breakthroughs.

Disruption-fit leaders are top-notch sensors, they are masters at creating informed acceleration and are obsessed at finding the opening in each context alteration. But it doesn’t end there. A major challenge remains: having their own organization embrace the same mindset. Why? Because leadership is at each level of the hierarchy, and great innovations rarely come from the top.

Written by: Marco Mancesti is R&D Director at IMD and an alumnus of the IMD Breakthrough Program for Senior Executives, Leading Strategic Initiatives, Organizational Learning In Action (OLA), and High Performance Leadership (HPL).

tweet
share on Facebookshare on Twittershare on Pinterestshare on LinkedInshare on Redditshare on VKontakteshare on Email
IMD Business SchoolFebruary 14, 2019