While some nations have made progress, many countries are far behind in closing the gender gap. Unfortunately, not a single country in the world has successfully eliminated its gender gap.

Yemen ranked as the worst country in the world for women in 2017, according to the WEF. Just 27.1% of women in the country were in the labor force, versus 75.6% of men.

Further, the country also ranked poorly for women’s political empowerment. Yemen has no women in parliament and has never had a female head of state. The law does not mandate equal pay, and women only have partial access to financial services.

Pakistan (the Islamic Republic of) ranked number two on the list of the world’s 15 worst countries for women in 2017. Pakistan is among the countries with the widest disparities between women and men in economic participation and opportunity. For example, 25.7% of Pakistani women were in the labor force, versus 85.7% of men.

Similarly, the disparity in educational attainment is also quite significant. Just 67.9% of school-aged girls in Pakistan attended primary school, a figure that falls to only 38.7% for secondary school. By contrast, enrollment rates for boys were 79.4% and 48.8%, respectively. Even worse was the gap in literacy rate between females and males — just 44.3% of women could read versus 69.1% of men.

All data was provided in the Global Gender Gap Report 2017, a report released annually by the World Economic Forum – the world’s 20 most and least gender-equal countries, 2017.
Looking at 144 countries, the magazine concludes that an average global gender gap of 32% remains, compared to 31.7% in 2016.

In the worst-scoring countries, economic and educational opportunities, as well as political representation and health outcomes, were far worse for women than for men.

The countries with the widest gender gaps are below (with #1 ranking as the worst). Yemen, the worst nation, has been the lowest ranked country in the report.

The world’s 20 least gender-equal countries in 2017 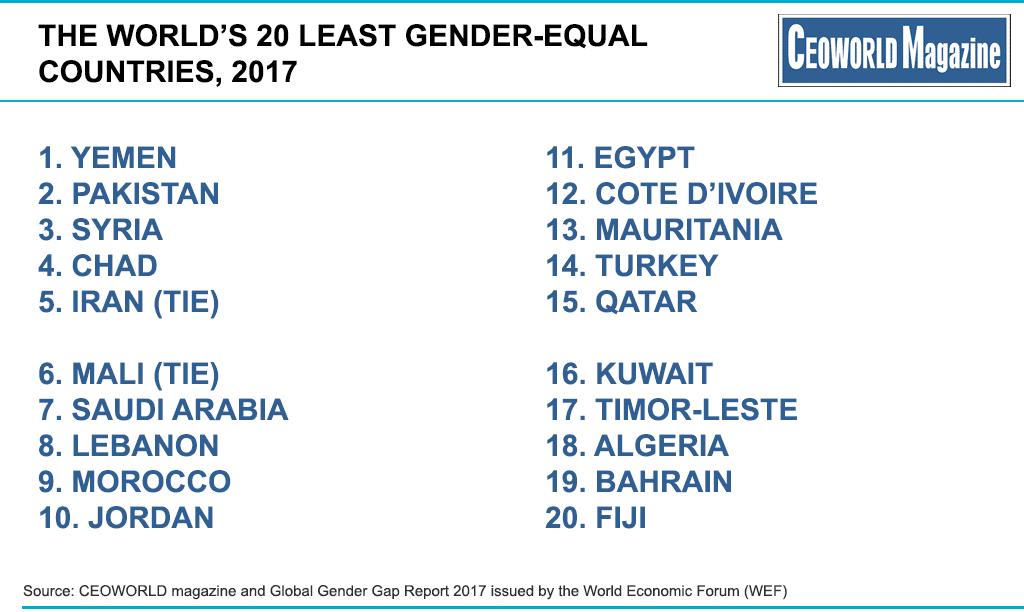