When former first-class cricketer Ian Pont discovered what he thought was the secret to fast-bowling, he decided to share it with the world. Establishing Mavericks Cricket Institute in Essex in 1993, becoming its director and head coach, was just the first step. In the twenty years since, he’s gone from a fly-by-night English coach to a fast-bowling ‘guru’ to borrow a word from one of his disciples.

He now runs UPF, The Ultimate Pace Foundation, which is coaching 100s of new, eager students in the art & science of speed.

In his coaching journey, Pont has been to three ICC World Cups, coached two national teams, won two T20 franchised titles as Head Coach and has been National Skills Sets coach for the ECB at Loughborough. His coaching stock is proven with Internationals and professional players seeking his information. More than this, Pont is inspiring a new generation of coaches.

“No one was interested in coaching speed when I started,” he says over a cappuccino in his hotel. Pont is affable and speaks animatedly, his hands, shoulders and eyebrows all dancing with gesticulations. It’s not just his physical size that makes him appear larger than life. His passion for cricket is palpable; his belief in his techniques is entrenched in his conversation.

“I looked at javelin and baseball. I tried to work out what the similarities are between specific movements across ballistic sports. I had training in both of those sports and discovered fast bowling is extremely backwards technically.”

Pont does not intend to monopolise the market but he’s on a mission to educate others. He was thrilled to have recently learned that a coach in New Zealand is using his techniques on the state team. The recognition is both humbling and gratifying. ‘I’ve been teaching this method for twenty-five years, telling everybody to keep their leg straight,’ Pont says. ‘Two years ago sports science agreed with me. A Eureka moment.’ 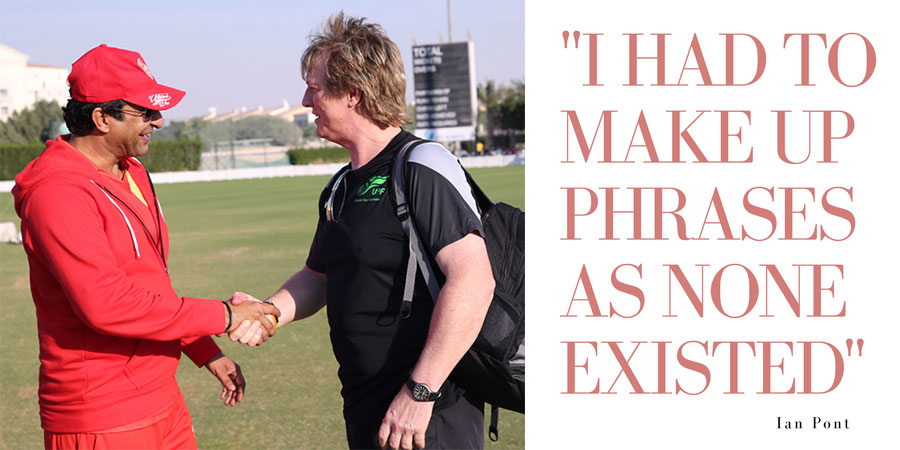 When he first started coaching his new methods, Pont had to refer to coaching positions he had created with descriptions so players and coaches wouldn’t be confused.

“I had to make up phrases as none existed. My favourite is pre-turn, which describes how the back foot rotates before a bowler bowls. But my entire methodology involves the Four Tent Pegs, RSSSA, Drop Step, Front Foot Block, Chest Drive, Shoulder Rotation, Back Foot Drag and others.” So was Pont concerned that his methods wouldn’t be well-received?

“You cannot wait for science to prove things for you. Science is simply a measuring tool. My measurement is the speed gun, fewer injuries in bowlers and far better outcomes. The secret is to avoid the complexity of science and make real coaching user-friendly and transferrable. Sadly I see too much gobbledegook spoken and a desire to complicate how a bowler can simply increase speed safely.

Pont discusses coaching cricket with a spiritual clarity and an appealing tone that makes him sound both knowledgeable and grounded. ‘I try and treat the kids like junior professionals. The process of change begins as soon as you think about it. Because if you know the process, you can highjack your system.’ 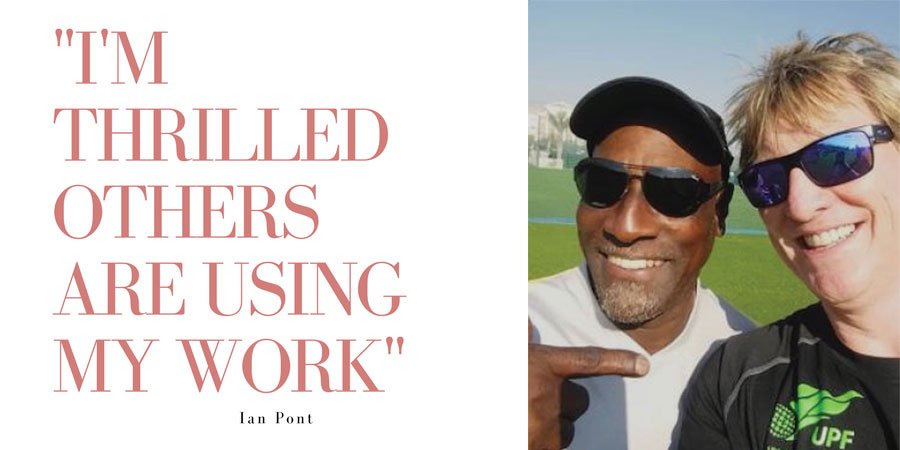 As he clarifies biomechanics, Pont stretches his arms wide, still seated in front of his coffee, and displays his massive wingspan, responsible for some of the fastest and furthest tosses of a cricket ball ever recorded. ‘The principal of speed is in the body shape and that’s not what people teach.’

‘I worked with Shoaib Akhtar, Dale Steyn, Mohit Sharma. It’s nice when someone passes through your hands and you see he’s done well. But at my camps, the immediacy of the penny dropping and you can see somebody just got it … that’s wonderful.’

‘You have got to be able to coach 8/9 year olds. So your coaching has to be relevant to all, not just the senior bowlers.’

After 4 years coaching in the subcontinent at the sharp end and witnessing first-hand the potential for pace development, what is next for Pont?

“We have just launched the UPFcricket.com website, which is for everyone. It’s a free registration and then a small monthly subscription for basically everything I know in my mind. I want to share what I have discovered with everyone and I am thrilled that other coaches are using my work. To be an inspiration for that is amazing.”

Pont’s commitment to sharing and his students belief in him could ultimately result in great things for both this coach and others. And despite having no sponsor and funding everything out of his own pocket, he realises the huge value this project has on the lives of those he coaches.

“I’ve worked with more than 2,500 students in my coaching life so far. And it gives me a great thrill to see them increasing their speed. After all, it’s not about proving what I know. It’s about making my students better than me.’

Jon Magidsohn, originally from Toronto, is the author of Immortal Highway and is a memoir writing teacher and facilitator. His work has been featured in The Guardian, National Geographic Traveller, The Bangalore Mirror, Yes & No Magazine, Hippocampus, Full Grown People and has written about fatherhood for Today’s Parent and the Good Men Project. He and his family live in London where Jon received an MA in Creative Nonfiction from City University.
view all posts