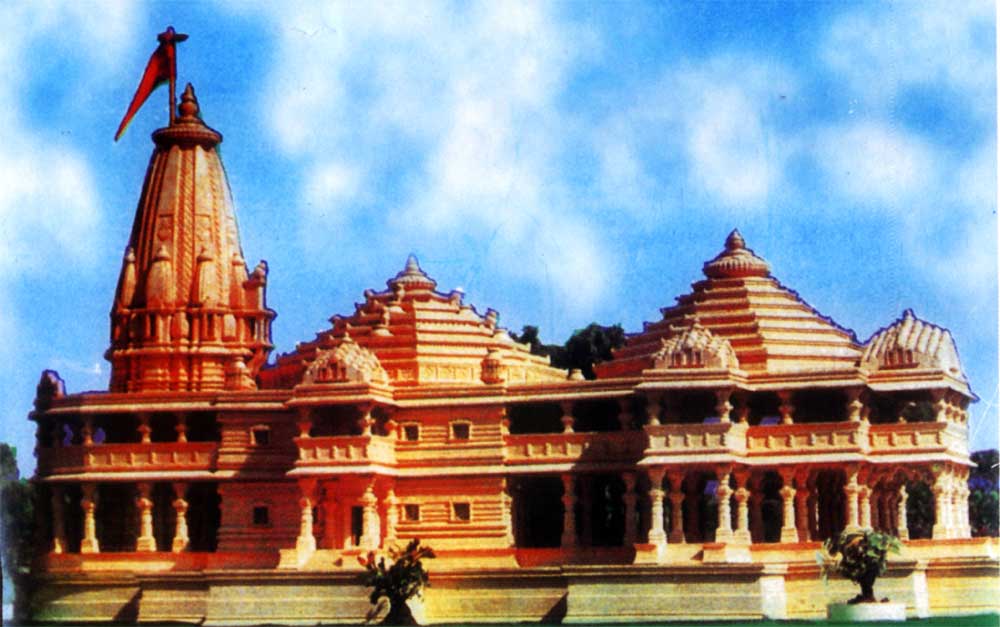 It is important to know the topic before you enter the debate, it is important to know about a moment before raising your arms up against it. The present day educated Muslim brothers are often confused. While their community supports the Babri structure, evidence and proof are in favor of the Shri Rama Janamabhoomi.

The question here is, what do you view the Babri structure as? Is it your holy place? If you feel yes, then do you actually want to own the barbaric acts committed by Babar and others?

In case your community is trying to misguide you, it is upon you to shoulder the task of showing it the right way. How difficult would it be to distance yourself from such an act of vandalism and barbarism from the past? It is alright if history has given you a bad name, disassociating from it is in your hands. And what your future generations bequeath is also in your hands. And why not? when the Germans are asked to apologies for the crimes of Hitler, they do not shy away. They do not hesitate to disown Nazism.

The Hindu society does not seek the thousands of the other temples plundered, looted and destroyed to build mosques on them. We don’t even seek compensation for the same. But if we want back only three of our holy sites–Ayodhya, Mathura and Kashi–out of the many vandalized, how painful is it?

We strongly believe that any interpretation of the Babri structure, other than that of it being a monument of our slavery, is asking Hindus to live with the humiliation that Babar wanted to inflict on them, as conquered people.

The battle for Ayodhya and Shri Rama Janmabhoomi is not a political movement as being painted. It is an issue of our cultural resurgence and identity. The movement is an expression of the collective consciousness of the Hindu ethos.

It is not anybody’s mere figment of imagination that the holy site is where Lord Rama took birth. A movement that has been silently going on for over 480 years now is not based on falsehood. There is ample archaeological proof and literary evidence to prove the existence of temple structures at the Shri Rama Janmabhoomi site.

The disputed structure was built by the Mughal invaders to prove their might. They wanted to take control of the Indians as the new masters. Gods and their temples were also vandalised in the process.

The Archaeological Survey of India (ASI) after extensive excavations during 12 March 2003 to 7 August 2003 published a report that supports the existence of a temple structure at the Shri Rama Janmabhoomi site that was razed down to build Babari structure. 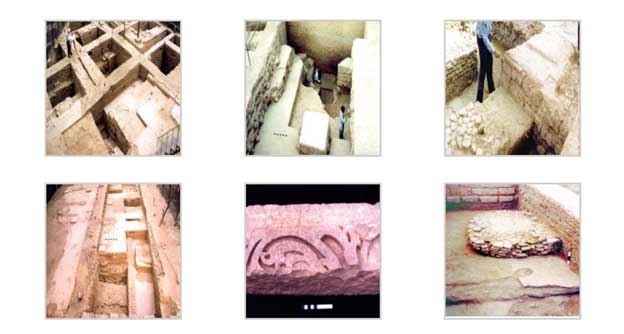 Here is an excerpt of the findings that we thought might interest our readers. This again is based on the reports submitted by an autonomous body, the ASI.

Sanskrit Literature— Several Sanskrit epics, Purans, Upanishads, poetries and religious scriptures from the time of Maharishi Valmiki till modern days have numerous instances that Ayodhya is the birth place of Shri Ram. There is also a detailed description about several holy places pertaining to Shri Ram in the Ayodhya Mahatmya wherein the significance of Shri Ram Janmabhumi Mandir is narrated after mentioning the location of this Mandir.

Sahifa-e-Chahal Nasa-ih-Bahaddur Shahi: by the daughter of Alamgir, son of Bahadur Shah (End of 17th century and beginning of 18th century)

The Masjids, which have been built on the basis of orders of Badashah (Ba Farman-e-Badashahi) are not permitted to hold Namaz prayers, nor to read the Khutba therein. The Hindus (Kufr) have lot of faith in the Hindu temples situated in Mathura, Benaras, Avadh etc. Like the birth place of Kanhaya, Sita Rasoi (kitchen), Hanuman Sthan, where he had sat in the proximity of Shri. Ramachandra on return after the Lanka victory. All these places were destroyed and Mosques were built on those spots only with a view to display the Islamic power. These Masjids have not been given the permission to hold Juma and Jamiyat (Namaj offered on Juma). But it was made mandatory not to worship any idols in them nor should any sound of conch shells be allowed to fall on the Muslim ears…….

Mirza Jan, who claims that he has studied various ancient sources in depth, asserts in his statements that the earlier Sultans did encourage the propagation and glorification of Islam and trampled the non-believers (Kufr) i.e. Hindu forces. Thus they redeemed Faizabad and Avadh of this mean tradition (Kufr) …… This (Avadh) was a very big centre of worship and the capital city of the kingdom of Ram’s father. There was a majestic temple on the spot a huge Musjid was constructed there on and a small canopy Mosque (Kanati Masjid) on the spot, where there was a small Mandap. The Janmasthan temple was the original birth place (Maskat) of Ram. Adjacent to it, there is the Sita Rasoi. ……Sita is the name of Ram’s wife. Hence Badashah Babar got constructed a tall (Sarbuland) Masjid on that spot under the guidance of Moosa Ashikan. The same Mosque is known as Sita Rasoi till today.

During the regime of Badashah Babur, a grand Mosque was constructed on the site pertaining to Sita Rasoi in Avadh. This was the Babari Masjid. Since the Hindus were not strong enough to oppose, the Masjid was constructed under the guidance of Sayyad Mir Ashikan…..

While giving details of the Dargah of Hazarat Shah Jamal Gojjari, the author writes that there is Mahalla Akbarpur on the east of this Dargah, whose other name is Kot Raja Ramachandra also. There were some Burz (Large cells with domes) in this Kot. There were the house of birth (Makan Paidaish) of the above mentioned Raja (King) and the Rasoi (Kitchen); besides, the western Burz and this premise is presently known as Janmasthan and Rasoi Sita. After demolishing and wiping out these houses (i.e. Janmasthan and Sita Rasoi), Badashah Babar got constructed a grand (Ajim) Masjid on that spot.

Babar constructed a grand Mosque under the protection of Sayyad Ashikan on the very same spot where once stood the temple of Janmasthan of Ramachandra in Ayodhya. Just adjacent to it stood the Sita Rasoi the date of Mosque construction is Khair Banki (Al Hizri 923). Till today this is known as Sita Rasoi. That temple stands just beside this…..
The names of the books written by some other Muslim authors which have the quotations confirming the construction of Masjid after destroying the temple are as follows:-
* Zia-e-Akhtar : by Haji Mohammed Hassan – 1878
* Kesar-ul-Tawarikh or Tawarikh-e-Avadh Vol.II : by Kamaluddin Hyder Hussain Al Hussain Al Mashahadi.
* Asrar-e-Haqiqat : by Lachhami Narayan Sadr Kanongo Assistant of munshi Moulavi Hashami
* Hindostan Islami Ahad : by Moulana Hakim Sayid Abdul Hai – 1972

Works and Reports by foreign authors:

History and Geography of India: by Joseph Typhentheller – 1785

Babur constructed a Masjid after demolishing the Ram Janmsthan temple…and using its pillars. Hindus refused to give up the place and they continue to come to that place in spite of the efforts by Mughals to prevent them from coming there. That they constructed a platform called Ram Chabutara in the compound of the Masjid. They circumambulate it for three times and prostrate flat on the ground before it. They were following this devotional conduct at Ram Chabutara and inside the Masjid also.

Gazetteers of the Province of Oundh – 1877

This confirms that the Mughals had destroyed three important Hindu temples and constructed Masjids on those places. Babar built Babari Masjid on Ramajanmbhumi in 1528

This report confirms the fact that Babar got constructed the Babari Masjid in 1528 on the place of Janmasthan temple that marks the birth-place of Ram.

The Court Decision: by Judge Colonel F. E. A. Chaimier While reading out his decision on the Civil Appeal No. 27 of 1885 after personally inspecting the site of the Babari Masjid, the district judge had said, “It is most unfortunate to have built a Mosque on the land, which has been considered as holy, especially by the Hindus. But the time of finding a solution for this complaint has lapsed. Because this event has taken place 356 years ago.”

Indian Archaeological Survey Report: by A. Fuhrer – 1891 Fuhrer accepts that Mir Khan had built the Babari Mosque on the same place of Ram Janmabhumi by using several of its pillars. He has further confirmed that Aurangzeb had similarly constructed two other Mosques at Swarg Dwar and Treta Thakur Mandir in Ayodhya.

Barabanki District Gazetteers: by H.R. Nevil – 1902 — Nevil states that a number of conflicts arose between Hindu priests of Ayodhya and the Muslims from time to time about the piece of land, where upon once stood the Junmasthan temple, which was destroyed by Babar and a Mosque was constructed on that place.

Encyclopedia Britannica, 15th edition Vol. I – 1978 :– There is a mention of constructing a Mosque by Babar in place of a temple that existed on the birth place of Ram prior to 1528 AD. A photograph of the existing structure is also given in this Encyclopedia, which has been referred to as a Mosque constructed on the birth place of Ram in Ayodhya of Uttar Pradesh state in India. Similar information were furnished in its earlier editions as well.

The Babri Structure was a similar construction that reminded India of the savagery and so its demolition was celebrated all across the country. A grand temple at the birth place of Lord Ram will instill a sense of pride in our rich cultural heritage and correct the historical wrong.