CEOWORLD magazine - Top Stories - Executive Education - Re Made in America: Before Trump, After Trump

Regardless of how you voted last November 2016 for US President, the results of a Trump victory are shaking the pants off corporate board room execs from here to China and back. Weeks before becoming President Mr Trump seemingly in a matter of ‘Tweets’ reversed the course of U.S. manufacturing outsourcing, and perhaps ushering in a new paradigm for global players.

But what does a Trump era presidency really mean for U.S. jobs and business in 2017?

Before Trump, After Trump

Before Trump, American businesses went about business as usual; The Goal; find more ways to make more money for shareholders… and that meant finding or creating ways to reduce the cost of doing business. Most notably over the last 5 decades U.S. companies sought to reduce the cost of both labor and taxes. These two because the rest of the world noticed that U.S policy-makers had fallen behind in these areas, and hence indirectly created a competitive opportunity to offer big companies a lower-cost of business as incentive to leave America and move offshore. And it worked; as the chart below indicates; the rate of outsourcing of U.S. jobs was flat… until 2002 when the internet and globalization strategies began to develop them more broadly. 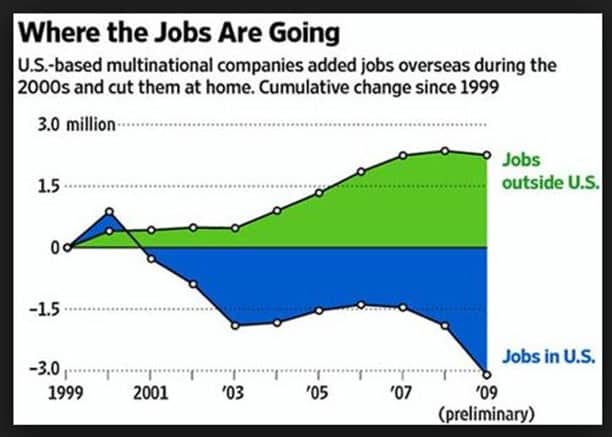 Add ‘Before Trump,’ and over the last 15 years, the internet, and new technologies have quickly enabled and accelerated ‘corporate globalization,’ which in turn enabled the free flow of investment capital, and manufactured goods & services across borders.

That, in turn enabled manufacturers to more easily establish operations in lower-cost countries to save money and export their wares back into the USA. In fact, from 2000-2016 dozens of well-known U.S.-based companies have relocated their corporate headquarters offshore specifically to avoid or reduce the cost of labor, and taxes. All combined, these companies have more than $2.5 Trillion in profits waiting to be repatriated back to the U.S. — but not at the “Before Trump” tax rates.

After Trump, things will change. No longer will mega multi-national companies with the resources to take advantage of new technologies, favorable U.S. tax & trade laws, low-interest capital, cheap labor and low regulation requirements easily take advantage; Because what was once good for business has not been good for low-skilled American workers in pursuit of the ‘American Dream.’

Rather, decades of job losses, inner city disenfranchisement, and the growing gap between rich and poor has taken its toll on American prosperity for many. The evidence by the numbers is clear. Since 2000 the U.S. lost 5 million manufacturing jobs to other, more cost competitive (lower wage) countries, according to Money Magazine. Moreover, as much as 20% (1 million) of those jobs were lost as a result of the once popular North American Free Trade Agreement (NAFTA). In their place, 5 million low-wage service jobs were created in the U.S over the last 8 years.

Enter Trump. Nothing like him said the political class. Can’t win, won’t win, shouldn’t win, you name it, every dog piled on. But nearly all the predictions were wrong. Because what was once the silent majority awoke to collectively storm the ballot boxes in an effort to take back and re-direct the economic direction of our country. And when the dust settled, like out of an old Clint Eastwood western movie, the new sheriff’s in town. And this one’s promised to really shake things up, bring back jobs, rollback regulations, reduce taxes, and revise a costly healthcare system for all Americans, and American businesses. President Lincoln in his first address to Congress in 1861 said: “Labor is the superior to capital, and deserves much the higher consideration.”

So will 2017 be a banner year for American business, for growth, for prosperity?

According to the NFIB small business survey at the end of 2016, small business CEO confidence registered its highest level since 2004, a 12 year high. And since Trump’s election victory several U.S.-based manufacturing companies, including Apple, Boeing, Caterpillar, Ford, GE, United Technologies, and others have announced plans to re-shore thousands of jobs back to the U.S. And don’t forget Amazon which announced it will hire 100,000 new full-time U.S. staffers over the next 18 months.

Looking ahead at a Trump-era presidency

While we all love the ideas Mr. Trump has espoused to “reset” the relationship between global businesses and global governments, we also fear the return of trade wars, currency wars, and real wars. These are all real downside risks.

Still, as we watch the U.S. stock market tip over DOW 20,000 for the first time ever, it reminds us of America in the roaring 1920’s, after WW I, when President Coolidge and the America people felt on top of the world and prosperity reigned for nearly a decade before the big market crash. Today, nearly 100 years later it once again feels like America is entering a period of ‘America First” euphoria… where all things will be better than before, for everyone, as long as they reside legally in America.

As for our biggest trading partners in Europe and Asia…A Trump-era Presidency might see a regressive import tax which could raise the cost of some favorite toys like consumer electronics, and autos… But that just might be the price we pay for a while to focus on ourselves, and let the rest of the world fend for themselves. And maybe that’s a good thing…as we stand witness facing the pros and cons of something really big being ‘Re-Made in America:’ Us.

CEOWORLD magazine - Top Stories - Executive Education - Re Made in America: Before Trump, After Trump