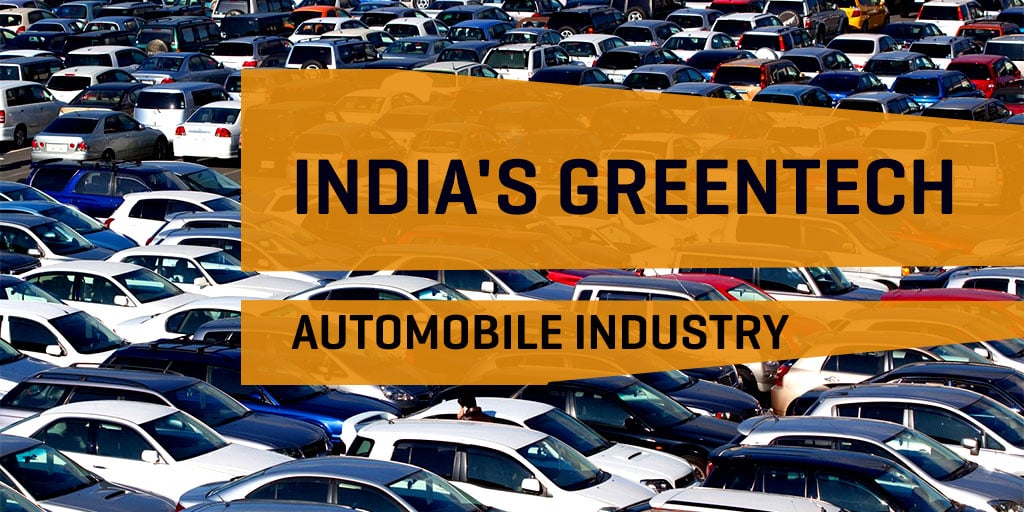 India is a major automobile exporter internationally and for the same reason it is the prime potential sector undertaken for the “Make in India” campaign. In the year 2016, the average production of vehicles is calculated to be around 24 million; making India the sixth largest producer of automobiles in the world. The industry accounts for almost 7% of India’s GDP.  The auto-component industry alone is worth 39 billion USD.

The potential of the sector needs no further supportive stats, but surely needs an edge that is driven by the Green technology.

According to the United Nations, if the on-going emissions of greenhouse gases are not controlled, it is likely that by the end of this century, global temperatures will exceed by 1.5⁰C. Carbon dioxide emissions have increased by 50% since 1990 and the maximum was calculated between 2000 and 2010.

The problem of rising global temperatures and emissions can be controlled by using a vast array of technological measures.

Automotive industry, being the most essential and developed sector is being eyed upon globally.  The application of eco-friendly technologies in this sector has become imperative to effectively care for our environment. Many countries around the globe are following the green automotive technology. As per the Auto Cheatsheet, United States and China are the leading countries in use of light duty plug-in electric vehicles. In San Francisco, one out of 10 vehicles purchased is hybrid. The U.K. and the Netherlands also record the highest sales of electric cars. Norway is the top electric car market in the world where one in every five auto consumers chose electric transports over the conventional ones. Other countries such as Sweden, Germany, Denmark and more are trending in adopting and following renewable energy for almost all their power needs from electricity to transportation.

The automotive industry is one of the major factors for the deteriorating air quality. In India to control the emissions; cars, transportation buses and light duty vehicles use comparatively less polluting Compressed Natural Gas (CNG) as an alternative fuel. But since the ratio of CNG vehicles is very less as compared to the conventional fuel vehicles, there has been the challenge of maintaining air quality in many major cities.

Therefore it becomes very crucial and urgent to follow some of the world’s best green automotive technologies.

Although, the concept of electric and hybrid cars is not new for India, it is not yet popularly adopted.

Efforts are being made to bring in the electric and hybrid automobile culture with a few car manufacturing companies introducing models that are green. A study done by an NDTV venture of India reflects that there is a rise in demand for hybrid and electric vehicles. The companies such as Mahindra, Volvo, Toyota and BMW have manufactured green technology equipped cars and SUVs in India.

If analyzed, why these ECO friendly vehicles are not popular among the people in the country, one of the many reasons would be that there are not many players operating in the sector. Very few companies have come up with the green cars in India, thereby leaving people with very limited preferences to choose from.

Also, the hybrid and electric cars available in India are high priced for the people who dominantly belong to the middle class.  The luxury car brands such as Volvo, BMW and Porsche have greener vehicles to offer, but are not affordable by everyone.

Different countries where people own an effective number of eco-friendly vehicles have greater options to choose from various reputed car companies. Ford, Fiat, Renault, Toyota and numerous others are experimenting and adopting new technologies to cut down on emissions and create vehicles that are cost effective and easy to maintain.

Aiming to become the third largest automotive market by volume in the world by 2026, electric cars are likely to be a sizeable part of the market in India.
Government regulations are playing an important role in establishing the green technology automotive industry as the Government of India has come up with favourable policies such as lower excise duties; automotive mission plans under Make in India. The National electric Mobility Mission plan 2022 (NEMMP) encourages promotion and development of indigenous manufacturing ability of affordable, reliable and efficient hybrid and electric vehicles.

A fact cannot be denied that the working population and the middle class are the key growth and demand drivers in India. The green technology automobiles need to meet the price expectations and efficient performance through government-industry collaboration.

tweet
share on Facebookshare on Twittershare on Pinterestshare on LinkedInshare on Redditshare on VKontakteshare on Email
Dackshta RanaJanuary 19, 2017