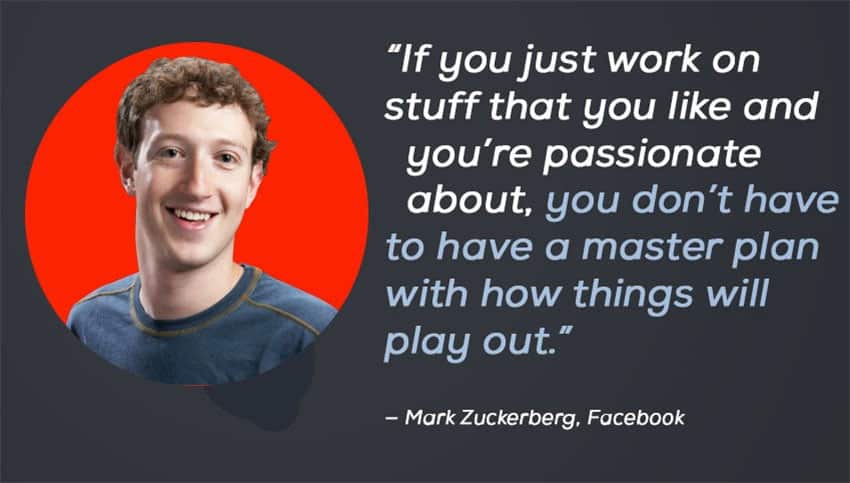 Over the past few months, our CEOWORLD Magazine team spoke with some of the World’s highly successful and effective CEOs, entrepreneurs, and other corporate executives and put the question to them: “What’s the best advice you’ve ever received to lead and succeed?” Here’s what they had to say.

I’m going to present a “greatest Quotes” package. Please don’t forget: Which of these entrepreneurial insights resonated most with you? Enjoy!

1) Surely you’ve heard of Mark Zuckerberg, the über-successful entrepreneur who co-founded Facebook says “If you just work on stuff that you like and you’re passionate about, you don’t have to have a master plan with how things will play out.”

2) “When you see an opportunity that you believe is compelling and large, it’s hard not to think about it and take action to pursue it.” – Tim Schigel, the Chairman and Founder of ShareThis, offers the most innovative sharing platform for today’s social audience.

3) “There are always more than two sides to every story — so make sure you seek all sides before making a decision.” – Carrie Freeman Parsons, Vice Chair, Freeman

4) “The reality is, entrepreneurs are programmed to be very idealistic… but we’re also a little paranoid. Overcoming that paranoia and being open to things is really important.” – Louis Piconi, Co-founder and Executive Vice President of Strategic Activities, Think Through Learning Inc.

5) “If there was a playbook you could follow to success, we’d all be using it. But we’re all different, and in our case, hard work and general enthusiasm are really important.” – Ben Lerer, co-founder & CEO of Thrillist Media Group and the Managing Director of Lerer Ventures.

6) “I am naturally inclined to worry and question all assumptions to ensure we don’t get cocky or arrogant.” – Daniel Lubetzky, the chief executive of Kind Snacks.

7) “Chase the vision, not the money; the money will end up following you.”  –Tony Hsieh, Zappos CEO.

9) “It’s almost always harder to raise capital than you thought it would be, and it always takes longer. So plan for that.”  –Richard Harroch, Managing Director and Global Head of M&A at VantagePoint Capital Partners, a large venture capital fund.

10) “Don’t worry about failure; you only have to be right once.”  –Drew Houston, Dropbox Co-Founder and CEO, Dropbox is a free service that lets you bring your photos, docs, and videos anywhere and share them easily. 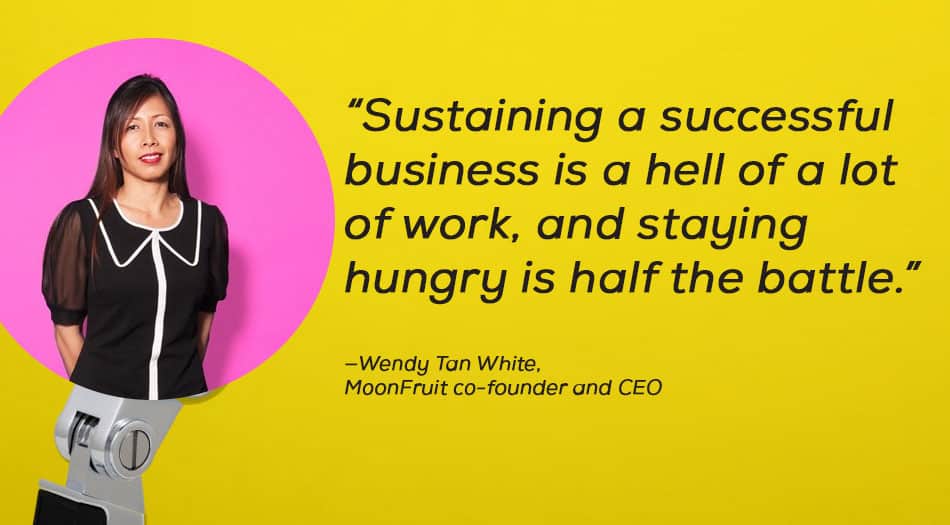 13) “Ideas are commodity. Execution of them is not.”  – Michael Dell, Dell Chairman and CEO

14) The secret to successful hiring is this: look for the people who want to change the world.”  – Marc Benioff, Salesforce CEO.

15) “I knew that if I failed I wouldn’t regret that, but I knew the one thing I might regret is not trying.”  – Jeff Bezos, Founder, President, Chief Executive Officer & Chairman of the board of Amazon.com.

16) “If you are not embarrassed by the first version of your product, you’ve launched too late.”  – Reid Hoffman, LinkedIn Co-Founder and Venture Capitalist, follow him on Twitter @reidhoffman.

18) “User experience is everything. It always has been, but it’s undervalued and underinvested in. If you don’t know user-centered design, study it. Hire people who know it. Obsess over it. Live and breathe it. Get your whole company on board.”  –Evan Williams, Co-Founder, Twitter.

19) “What do you need to start a business? Three simple things: know your product better than anyone, know your customer, and have a burning desire to succeed.”  – Dave Thomas, the founder and chief executive officer of Wendy’s, an international fast food chain restaurant.

21) “You shouldn’t focus on why you can’t do something, which is what most people do. You should focus on why perhaps you can, and be one of the exceptions.”  – Steve Case, AOL Co-Founder and CEO; now Chairman of Case Foundation and Revolution (LivingSocial, Zipcar, Exclusive Resorts, Everyday Health, FedBid, Miraval, etc)

23) “You don’t learn to walk by following rules. You learn by doing and falling over.”  – Richard Branson, Virgin Group Founder.

24) “Even if you don’t have the perfect idea to begin with, you can likely adapt.”  – Victoria Ransom, Wildfire Interactive Co-Founder. 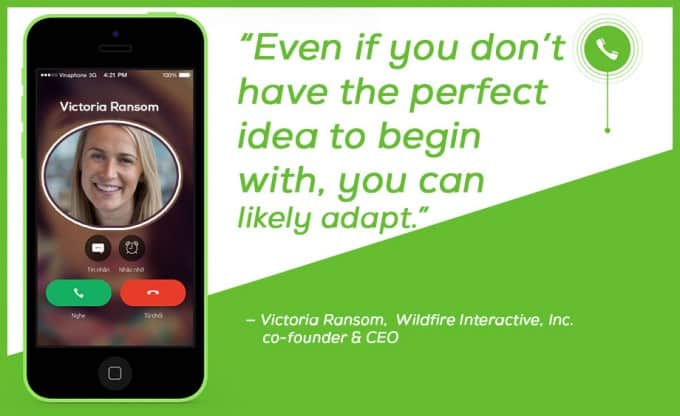 25) “High expectations are the key to everything.”  – Sam Walton, Walmart Founder.

27) “Your most unhappy customers are your greatest source of learning.”  – Bill Gates, Microsoft Founder and former CEO.

28) “Your reputation is more important than your paycheck, and your integrity is worth more than your career.” — Ryan Freitas, About.me co-founder

29) “Every time we launch a feature, people yell at us.” — Angelo Sotira, deviantART co-founder.

30) “Be undeniably good. No marketing effort or social media buzzword can be a substitute for that.” —Anthony Volodkin, Hype Machine founder.

31) “Money is like gasoline during a road trip. You don’t want to run out of gas on your trip, but you’re not doing a tour of gas stations.” —Tim O’Reilly, O’Reilly Media founder and CEO.

32) “If you can’t feed a team with two pizzas, it’s too large.” —Jeff Bezos, Amazon founder and CEO

33) “Don’t worry about people stealing your design work. Worry about the day they stop.” —Jeffrey Zeldman, A List Apart Publisher.

“Don’t be afraid to assert yourself, have confidence in your abilities and don’t let the bastards get you down.” — Michael Bloomberg, Bloomberg L.P. founder 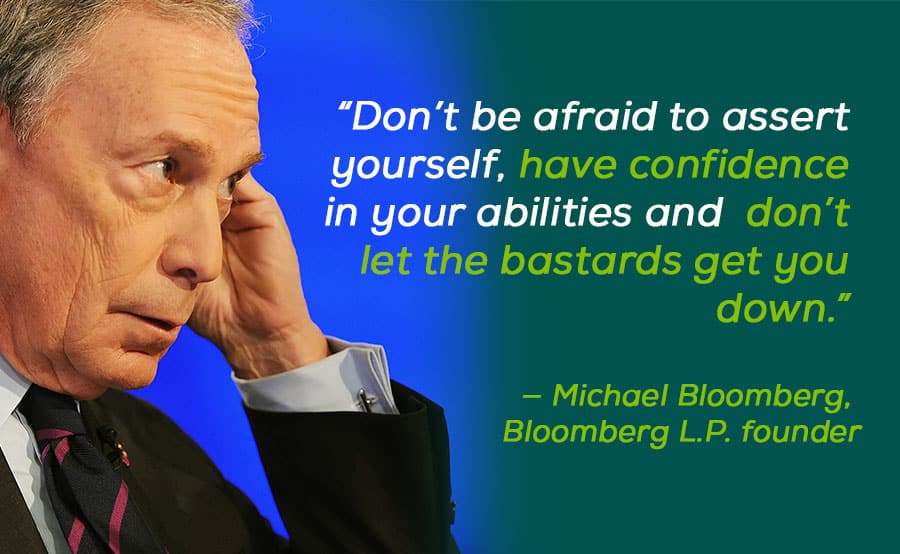 Tell me: Do any of these entrepreneurial insights ring true to you? What else would you add to the list: Greatest Quotes Package?

tweet
share on Facebookshare on Twittershare on Pinterestshare on LinkedInshare on Redditshare on VKontakteshare on Email
Prof. Dr. Amarendra Bhushan DhirajMarch 18, 2014