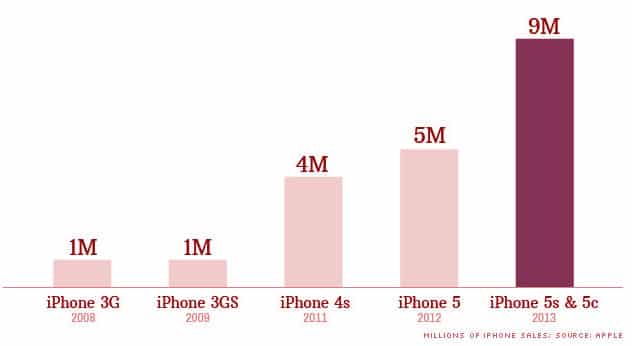 Yeah, So it turns out that Apple sold a combined total of nine million iPhone 5s and iPhone 5c smartphones over the weekend — almost double the previous record. Apple also announced over 200 million iPhones are already running the new iOS 7 software.

The Cupertino, California-based company allowed customers to place early orders for the iPhone 5C, the lower-cost model, but not the iPhone 5S because of expected supply constraints.

“This is our best iPhone launch yet,” said Tim Cook, Apple’s chief executive, in a statement. “While we’ve sold out of our initial supply of iPhone 5S, stores continue to receive new iPhone shipments regularly. We appreciate everyone’s patience and are working hard to build enough new iPhones for everyone.”

There’s no way of knowing how the sales figure is split between two next-generation iPhones (iPhone 5c and 5s), web analytics company Localytics thinks it has a good glimpse into sales, saying the iPhone 5s outsold the iPhone 5c by 3.4 times:

“In less than 3 days, the iPhone 5s and 5c combined now represent about 1.36% of the total numbers of all iPhones activated in the U.S. market across the top 4 carriers AT&T, Verizon Wireless, Sprint and T-Mobile. From the data we are seeing, 1.05% of all iPhones in the United States are now iPhone 5s and just 0.31% are iPhone 5c.”

tweet
share on Facebookshare on Twittershare on Pinterestshare on LinkedInshare on Redditshare on VKontakteshare on Email
Jessica Todd SwiftSeptember 23, 2013