Not all leaks and rumors in the tech world are true, but Xiaomi, one of China’s hottest technology companies, has officially gone beyond smartphones and launches an Android-based 47-inch 3D-capable smart TV.

What was interesting about the smart TV, come in six colors for the aluminium faceplate, and supports dual-band WiFi frequencies of 2.4GHz and 5GHz — users can stream shows wirelessly to their TV set.

Most of the other specs: a 47-inch 3D HD LCD, run on Android atop Qualcomm’s Snapdragon 600 chipset, It also comes with a 11 button remote and will support Bluetooth 4.0 and dual-band Wi-Fi.

CEO and founder Lei Jun unveiled the 47-inch 3D-capable smart TV at a launch event in Beijing. The three-year old phonemaker, has been making a lot of waves over the last couple of years.

Expectations for Xiaomi are high, as it builds a business worth $10 billion that is still largely unknown outside Asia. Company also announced that former VP for Android product marketing, Hugo Barra will join the company officially in October as a vice president and will be responsible for the company’s global business. 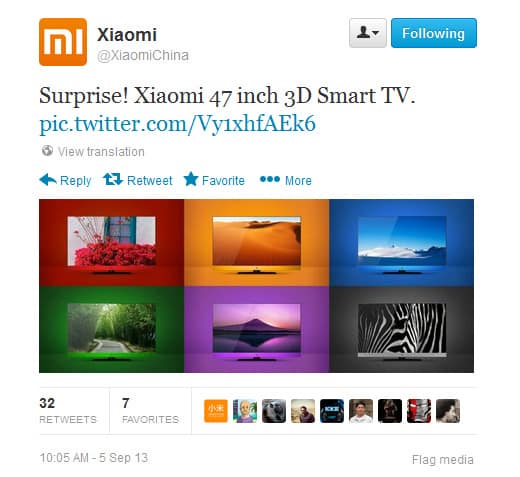 tweet
share on Facebookshare on Twittershare on Pinterestshare on LinkedInshare on Redditshare on VKontakteshare on Email
Prof. Dr. Amarendra Bhushan DhirajSeptember 5, 2013