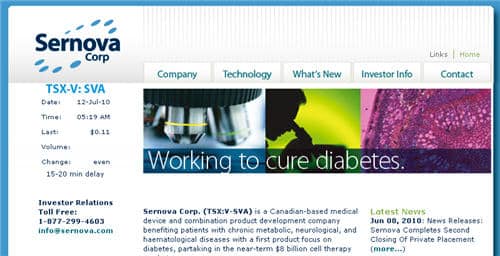 Canadian-based health sciences company, Sernova Corp (SVA) said its experimental glucose-control device showed safety and efficacy in a pre-clinical study in pigs that were made diabetic.

Dr. Philip Toleikis, Sernova’s President & CEO, noted “Our Cell Pouch System(TM) is a proprietary medical device implanted under the skin rapidly forming into a tissue-engineered, organ-like structure that provides a natural environment for the survival and function of therapeutic cells. These long-term results represent a significant achievement as a possible alternative to the current practice of injecting islets directly into the portal vein of the liver.”

“Our data are profound because they suggest the potential to reduce side-effects associated with the current standard of care and achieve glucose control with significantly fewer islets than normally required,” said Toleikis.

The Cell Pouch System(TM) was implanted in pigs which were then made diabetic through removing the pancreas and chemical induction. The animal’s own islets (Autograft) isolated from the pancreas were transplanted into the device. Standard measures of efficacy including fasting and non-fasting glucose levels, glucose tolerance tests (IVGTT), and C-peptide were taken up to 72 days post-transplant. At the end of the study period, the device containing the islets was removed and the animals returned to a diabetic state.

tweet
share on Facebookshare on Twittershare on Pinterestshare on LinkedInshare on Redditshare on VKontakteshare on Email
Jessica Todd SwiftJuly 12, 2010